ATLANTA — After three challenging years, dry cleaners, along with their fellow textile care professionals, finally gathered again at the Clean Show, the industry’s largest North American exposition. Hosted by Atlanta July 30 through August 2, the event offered cleaners the opportunity to interact with manufacturers, suppliers and their peers.

The event was delayed a year because of the COVID-19 pandemic. Finally underway, enthusiasm ran high at the show, and those in attendance seemed ready to shake off the past few years and launch into the future.

“These industries have been through a lot these last two years,” says Greg Jira, show director for the event, “and Clean’s goal is to serve as a global platform for knowledge and idea-sharing so that companies may walk away with the tools they need to recover and ultimately, thrive.”

While there were some questions about what the 2022 show would be like while it was in the planning stages, the show had 51 first-time exhibitors, which Messe Frankfurt called a record. While the nearly 10,000 attendees were fewer than the 2019 show in New Orleans, there was a sense of excitement from those who made the trip.

“We really didn’t know what to expect from the show, or what the turnout was going to be,” says Vic Williams, eastern sales manager for Union Dry Cleaning. “Then, during the first day, we turned around and it was already 2 o’clock. We were talking to so many people, we lost track of time.”

“I’ve been to the shows since 1995,” says Sassan Rahimzadeh, president of the California Cleaners Association (CCA), as well as president of ARYA Cleaners in Chula Vista, California. “The post-COVID energy that it’s bringing is really making it so much more exciting. You could have put this thing on the moon and all the people would have still shown up.”

While there have been advancements in virtual meetings during the lockdowns, Rahimzadeh believes there’s no substitute for in-person meetings: “As much as we’ve gotten over the last couple of years with Zooms and everything else, we’ve found how much more we really need to do and elevate ourselves as an industry.”

“This show has been wonderful,” says DLI CEO Mary Scalco. “It was great to see friends you haven’t seen for a while. The energy has been unbelievable. I think there is a fresh outlook on the industry. Everybody’s excited — if they’re here, they’ve made it through the tough part, and they’re ready to go into the future.”

Bobby Patel, owner of Kona Cleaners, Orange County, Calif., and co-founder of the marketing firm BeCreative360, shares Scalco’s views about the attitude of the survivors.

“The people who made it here are the serious ones,” he says. “These are the people who I feel will do very well. They’re positioning themselves for the future. Everybody I’ve talked to is looking to buy equipment that’s going to save labor and help them automate their stores. They are being proactive.”

“We’re looking for some new machines to put money back into the business,” she says. “We’re looking to expand, make connections and find out from other cleaners what they’re doing and what’s working for them so we can continue to work and grow our business.”

For others, such as Chris and Chheavy Lema, owners of Martinizing Dry Cleaners in Auburn, New York, the opportunity to learn from experienced professionals drew them to the event. With 2022 being their first Clean Show, they were open to all possibilities.

“There are a lot of really successful people here who are very open to sharing and having conversations,” Chris Lema says. “The networking has been amazing.”

“We want to build relationships in the industry and connect with people,” Chheavy Lema says. “I think that it’s huge to have partners in the industry — it definitely helps keep you inspired.”

“What I want to leave with are a few more connections,” he says. “I want a few more people who I can call with questions or any ideas to bounce ideas off. The other thing is that there are a few specific equipment items that I want to see. That way, when I look at putting some in my plant, we know who to call.”

For veteran dry cleaners, the Clean Show is an opportunity to advance their craft and take back actionable steps to grow their businesses.

“I’ve been to five Clean Shows,” says Ken Davis, owner of Kenny the Kleener in Skokie, Illinois. “The last Clean Show probably meant about $100,000 to me, from the things I learned and things that I instituted in my store.”

Come back Thursday for Part 2 of this series, when we’ll look at some of the educational sessions conducted during Clean Show 2022. 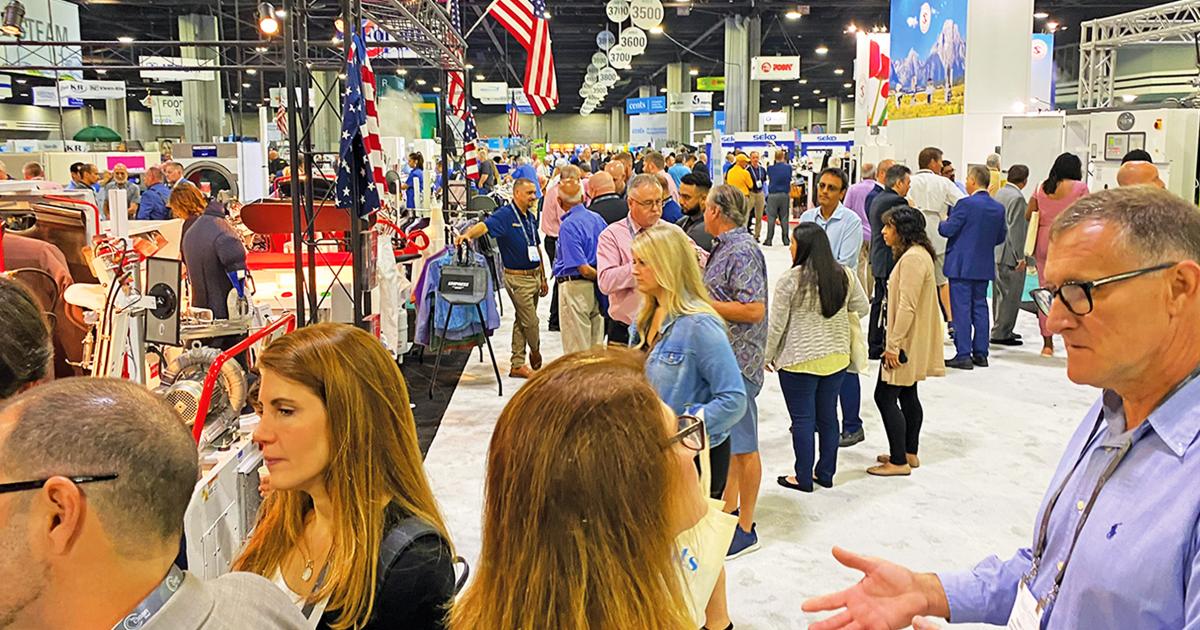 After a year’s delay, the 2022 Clean Show kicked off on July 30, bringing nearly 10,000 attendees together with 347 exhibitors during the four-day event, held in Atlanta. Energy was running high as industry professionals were looking put the past couple of years behind them and look toward the future. (Photo by Dave Davis)