ATLANTA — There was excitement in the air as dry cleaners and other textile care professionals hit the floor in Atlanta for Clean Show 2022. Because it was delayed a year because of the pandemic, there were plenty of people looking for ideas to take them into a brighter future.

In Part 1, we looked at some of the reactions Clean Show attendees had as they hit the floor for the event, and in Part 2  and Part 3, we examined some of the educational opportunities provided by industry professionals. Today, we’ll conclude our series by exploring some of the products unveiled at Clean Show 2022 and seeing how manufacturers were working to compensate for supply chain challenges.

While there were fewer new products introduced at Clean Show 2022 as perhaps in past shows, several manufacturers said they were there more to reestablish relationships and connect with cleaners who found they needed to replace or update their current equipment. There were some product and service announcements made at this year’s event.

“This is really important in areas with a questionable grid, like California and Texas,” says Poseidon’s Vice President of Sales Joel Jorgensen, “or places with heavy storms and lightning, such as Florida.”

While its product has been in beta tests since February, SMRT Systems launched an integrated marketing platform that handles custom marketing for its users, including reputation management, social posting and website functions. One of the major advantages of the system, SMRT Systems CEO Bill Alber says, is that it functions in real time. “You receive a package of laundry, and we immediately hit you and ask, ‘How did we do?’” he says.

SPOT by Xplor showed off its latest offering, Connect, its next generation of its drycleaning software. “We want to obviously support (cleaners’) operational needs,” says Tom Beidle, SPOT by Xplor CEO, Personal Services, “but we also want to give them a technology that allows them to grow their drycleaning footprint.”

Beidle says he believes this new offering will allow cleaners to become more efficient with their resources, save on their operational expenses, and grow their revenue.

“The customer comes into the dry cleaner, scans a QR code, places their order, and hands it over to the cleaner,” says Jordan Arnold, operations manager of Cobblers Direct. The items are then sent to Cobblers Direct, repaired, and sent back to the cleaner for pickup. “Cleaners won’t have to do any of the work,” Arnold says. “You can just sit back, and it will draw in foot traffic.”

Colmac introduced a reduced-height steam tunnel finisher, made for tight spaces. “It’s a regular tunnel, but it’s eight inches shorter,” says Jeff Hughes, sales and service specialist for Colmac. “We design this for cruise ships, but the upside is that, by making it shorter, it will fit into smaller doors. So, if a dry cleaner is in a building that only has double glass doors, we can get it in now.”

“The 5600 is based on our previous model, the LP-590, but it’s a lot faster,” says Sankosha USA President Wesley Nelson. “We sped up the motion of the machine and increased the heat output without compromising safety.”

About the new LP-6000U high-speed single collar cuff press, Nelson says, “This machine also has a quicker drying time, and is designed to make it easier to do short sleeves as well as standard cuffs.”

Forenta introduced an updated line of small and large laundry presses, the VS and VL series, at the show. One of the biggest improvements, says Forenta President and CEO Rusty Smith, is that the new machines have the option of an electrical timer, rather than a pneumatic timer. “Due to contamination, clogs or other factors, pneumatic times are always going to be a little inconsistent,” Smith says.

As with any global market, manufacturers of drycleaning machines and supplies were hit hard by skyrocketing shipping prices and delays brought on by the pandemic. Many of the vendors attending the Clean Show said that the lead times between ordering a piece of equipment and delivery, while not quite back to 2019 levels, were falling as the supply chain started to show signs of recovery.

“Our lead times right now, I would say, are strongly variable — it depends on which product,” says Al Adcock, vice president of sales for B&C Technologies. He says things are recovering slowly: “Starting from last summer, which was the peak of the horribleness, things are starting to come back down from the stratosphere, and getting back into reasonable territory.”

“Lead times are improving,” says Tari Albright, marketing communications director at Continental Girbau. She agrees with Adcock that import times depend on the origin of the product or parts, but the skies are starting to clear a bit. “We’re seeing our times shortening for all our products.”

Being proactive has helped in shortening lead times, says Brett McLeod of Garment Management Systems: “We have some components from the U.K. and from Japan, so there are times when I’m having to order things sooner than I’d like, but so far, we have yet to have an issue where we couldn’t ship something when we wanted to because we didn’t have the part.”

For companies who could bring their manufacturing processes into the U.S., or better still, in-house, lead times aren’t as big a factor.

“We brought all of our rotational molding in-house, and we’ve been doing that since spring of 2020,” says Cindy Lapidakis, vice president of sales and marketing for Royal Basket Trucks. “We’ve always had a seven-to-10-day lead time, and that hasn’t changed.”

Looking Toward the Future

Because of global exhibition scheduling issues, the Clean Show will skip another year to return to its odd-year format. It is scheduled to take place next in Orlando, Florida, in mid-August 2025.

Nora Nealis, executive director of the National Cleaners Association (NCA), says the future is bright, both for future Clean Shows and for the industry as a whole.

“The folks who are here are excited,” she says. “They see the possibilities. They’ve become lean, and they’ve had a good lesson in taking serious steps toward the future, and they’re optimistic. I’m sorry to see that we’ve lost some friends who retired or who closed shop, but there have been some new faces, which I’m glad to see. ”

“The show was well attended with quality customers,” Sankosha’s Nelson says. “People were there for a purpose. And after three years, it was really nice to get together with our customers and with the other manufacturers. It was a successful show for the industry — we were glad we supported it, and we look forward to the next.” 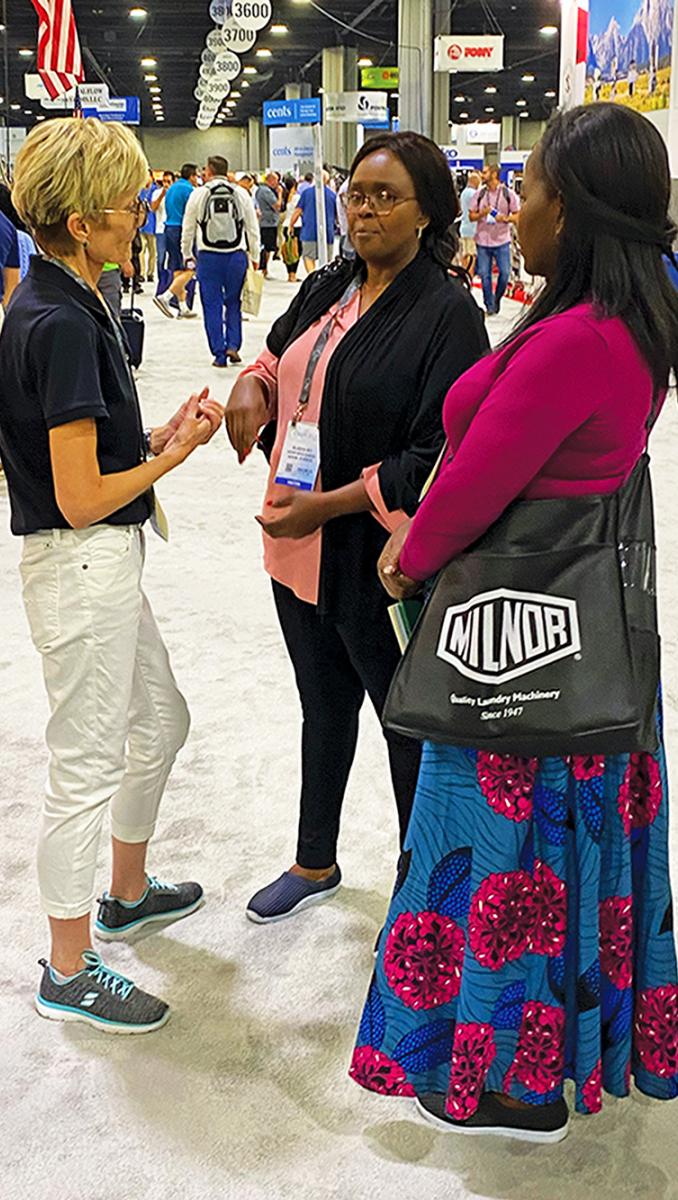 Dry cleaners and other textile care professionals took the opportunity to ask questions of exhibitors who were representing their companies at the 2022 Clean Show, getting the information they need to grow into the future. (Photo by Dave Davis)