ATLANTA — Although it would be great to be able to buy a better culture for your workplace, the “secret” is that it takes work, effort and vision to put it into place, no matter what some would have business owners believe.

That was the message of Sean Abbas during his presentation “Best Culture Wins” at the 2022 Clean Show. Abbas, president of Threads, Inc., a software company he co-founded to help organizations review employees on culture, offered his views on this subject and how to “slow cook” a winning workplace culture

In Part 1 of this series, we examined some of the benefits of having a positive culture — and some of the pitfalls that come with “quick-fix” solutions. In Part 2, Abbas detailed some of his own experiences — and the moment he rethought a major part of leadership. Today, we’ll examine the solution he found to getting better evaluations.

Abbas adopted a new form of evaluation — a chart with “Values” (how you do things) on the vertical axis, and results (what you do) on the horizontal axis. This gives four quadrants of evaluation. When both Values and Results are low, this is the red zone, where both areas need work. When one measurement is high and the other low, this gives two yellow zones, depicting the area where the employee could improve. When both Values and Results are high, this is the green zone, where team members should strive to be.

By putting the scores taken on the previous evaluation and mapping those individual scores on this chart, a much clearer picture began to take shape. “This made sense to me,” Abbas said. “For the first time, I absolutely understood what this means.”

When Abbas put the numbers for the employee who was causing trouble for his supervisor into this new format, he hoped that the tool would help to illustrate the problem and where improvements could be made.

Things did not go according to plan.

The employee quickly grew angry, shouted his resignation, and left the plant, yelling at everyone he found on his way out. While Abbas was shocked, the employee’s manager was not.

“What you saw today I see every day,” the manager said. “I’ve turned over six employees and had to train six more because of that person. That happens to me every day. And you’re out of breath? Welcome to the party!”

“It was a brutal moment of my career,” Abbas says, “but it also created in me a bit of extra resolve. When this person left, the employees knew immediately that something was different. People started stepping up, and turnover in this area, absolutely and completely stopped. We began to do this across the entire company for around 115 employees. We have several large manufacturing employees or employers in our community — some very big brand name employers in our community — and our turnover was less than 2% annually.”

“I began to realize is that all these things that we think we have in terms of a culture problem are actually one or two individuals who need to be addressed and focused on instead,” Abbas says. “Our productivity increased, morale went up, and everything started happening differently in our organization.”

The Core of Your Company

One of the first steps in generating a positive atmosphere in your company, Abbas believes, is defining what it is you stand for — what you want your company to be, and what it will take to get there.

These values, when properly thought out and communicated, Abbas feels, provide valuable context for both you and your team each and every day.

“I want people to understand our core values,” he says. “First, how you do what you do matters to me significantly. It almost matters more to me than what you do. If you do something to make a mistake, but you make that mistake with the best of intentions, giving your absolute best effort, and you learn from it. I’m down with that all day long. But what I’m not happy about is people who do things, and do so at the expense of core values, or don’t really consider how these things matter.”

“As an employee,” Abbas says, “when you were working on next to somebody and you didn’t do what you’re supposed to do, was there HR? No. Was there a point handbook? No. Was there a first, second, or third warning? No. There was a coworker standing next to you saying, ‘Hey, that’s not how this works.’ There was accountability amongst the team. There’s also a certain set of expectations.”

As a company grows, however, it’s important to start to define and communicate what is most important to you as a leader, for both yourself, your team and your business.

Come back Thursday for the conclusion of this series, where we’ll dive deeper into core values. For Part 1, click HERE. For Part 2, click HERE. 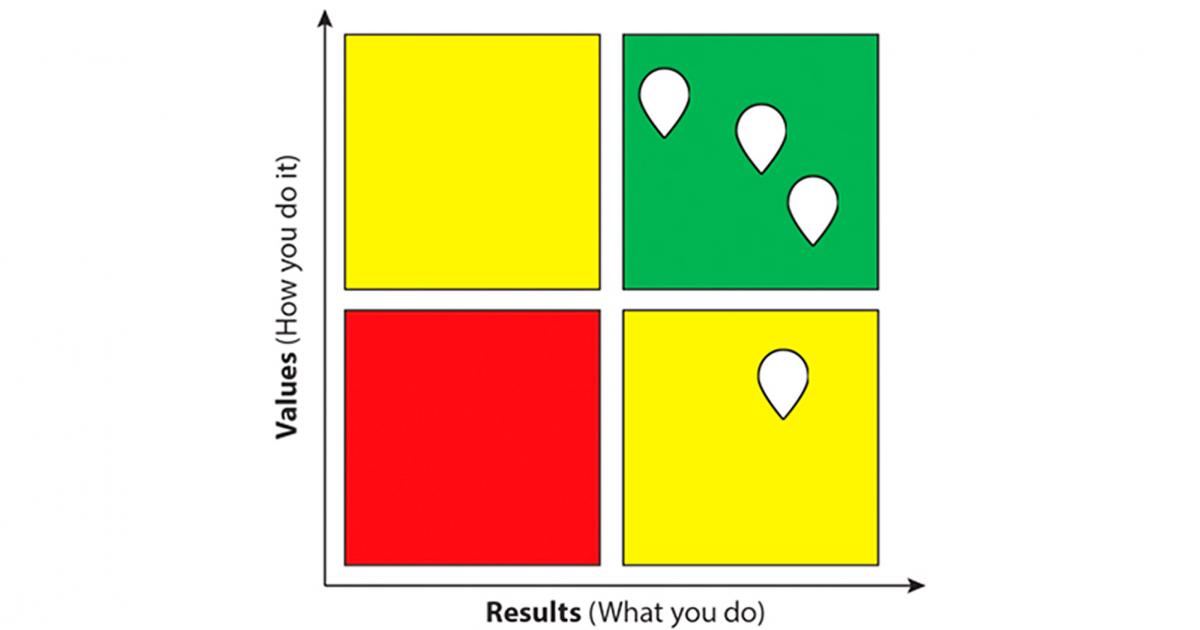 Instead of charting an employee’s progress as an average number, putting their scores on a graph such as this one can provide valuable insight as to what that person is doing right, and what can be improved upon. (Graphic by Dave Davis, as originally presented by Sean Abbas)