CHICAGO — There’s no perfect time to build and open a new drycleaning plant — decisions have to be weighed and risk is always a factor — and having a global pandemic striking just after you open the doors of a new plant is far from ideal. Having a new facility, however, opens new doors and can give cleaners an advantage when finding new customers who have different demands from the existing client base.

In Part 1 and Part 2 of this series, we met cleaners who decided to take the leap to build new facilities, and how they met the challenge of a pandemic striking just after they opened their doors. Today, we’ll looks at the benefits their new plants are offering them as we come out of lockdown.

“Let’s say someone is limited on space, and they’ve maxed out their capacity,” he says. “Because of that, they don’t go after new business opportunities. They don’t advertise. Or, say you have a cleaner who doesn’t have his own shirt unit, and they send their work out to a wholesaler. If they have a new plant, and they put in their own equipment, they control the process. They control the volume. It might give them opportunities to go out and expand their business.”

For Mark Watkins, owner of Mark’s Cleaners in Birmingham, newer, more efficient surroundings opened his business up to new possibilities.

“If you have enough space, you can diversify,” he says. “Depending on where you put your location, it can actually present different opportunities than you would have normally had.”

One of the first decisions that went into Watkins’ plant was its location.

“I tried to put myself in a situation where I’m dealing with people who are going to have their clothes cleaned,” he says. “It made sense to me to locate near hotels, nicer apartments and condos, and so on. We’ve got hospitals around here that we didn’t have before, with doctors’ offices around them. You want to put yourself in the best area you can afford.”

As more of a specialized cleaner, Jon Simon, owner of Parkway Custom Drycleaning, knew that, in his case, his business needed to stay close to its existing customer base in the metro Washington, D.C. area. “Nobody is coming to me for price. Zero,” he says. “We are, no question, the most expensive in town.”

Although the new store is technically in a different city — he moved from Chevy Chase to Rockville, Maryland — it’s still located about five miles from his old location.

“Customers might drive a few miles,” Simon says, “but if you’re putting yourself outside of a 15-minute drive, you’re going to potentially be in trouble because there are probably several cleaners between your new location and your old one.”

Other factors, such as population density, convenience, traffic flow, ease of access and more also need to be weighed before making a final decision.

Parkway’s new facility gives Simon and his team options that they never had at the old location, as well as simply being a better place to work.

“There’s better light and much better air movement here,” he says. “We also have more room to store things — we’ve built out a climate control system for furs and offseason storage and restoration storage. I had to outsource that before, so now I’m not paying that fee. It’s also not as noisy because I now have a much more isolated boiler room and compressor area. This all bears on your employees’ quality of life, which speaks to employee retention and productivity.”

Renovating an existing building or erecting a new structure can be expensive — Simon estimates his remodeling cost in the neighborhood of $750,000, while Watkins said his new building cost “north of $1,000,000.”  There are other economic factors to consider, though. The economics of the move, including creating a much more efficient facility, made sense to Simon.

“You have to look at your carry,” he says. “When I factored in rent and utilities, I did the math, and I saw I was going to save thousands of dollars a month, so that ROI alone was going to be something. You’re also building equity, and you can depreciate the building as well as your equipment on your taxes.”

Besides savings in utilities, Ilkowitz believes there are other ways newer equipment can bring a quick, positive ROI.

“I think the single biggest issue with older plants with older equipment is that this industry is highly labor-intensive,” he says, “especially when you look at increases in minimum wages and other factors. There have always been issues with labor in this industry. Ten years ago, people used to complain about the cost of labor, and then two or three years ago, they started complaining about the availability of labor.”

New technology can help cleaners ease this stress and even out their workload.

“With new, user-friendly equipment, you can hire good employees who show up for work every day and cross-train them to work on every piece of equipment,” Ilkowitz says. “With the currently reduced volumes in the industry, it’s hard to find enough hours for everybody. Now, if you have a good employee who can do a little of this and a little of that, you can give them regular hours, and they can get all the work done.

“If you’re going to get into a new plant, that’s kind of the direction that would give you the best opportunity of being able to do something efficiently and make some money.”

WHAT TO TAKE AND WHAT TO LEAVE BEHIND

When building a new facility, the decision of what to take from the old one and what to buy new is one that owners must consider.

“if you’re going into this and building a new plant, you don’t want to cut every corner and bring a whole bunch of old, used inefficient equipment,” Ilkowitz says. “In general, if you’re going to build new, you’re building new because you want to make everything efficient. That means that you need a good installer, and that means you’ve got to have good suppliers who are supplying you with the right piece of equipment that fits your expected needs.

While Parkway moved some of its equipment from the old location to the new, Simon saw this experience as an opportunity to evaluate what he had and see if it could be better.

“I had a couple of really old presses,” he says, “and I had to pay to get them ripped out, but why not put the cost of re-installing them at the new place in, too, instead, of installing a new piece of equipment? You’ve got to weigh the ROI.”

Simon estimates that he moved 80% of Parkway’s his equipment into the new space. Even so, the more efficient gear that made up the other 20%, along with modifications to the building itself, is starting to show a return. “My operating costs from a gas and electric standpoint alone are about 10% to 15% lower,” he says.

“I wouldn’t buy something that couldn’t be paid off within five years,” Watkins says. “I brought over a bunch of my equipment that was fairly up to date.”

Watkins bought a more efficient boiler and new holding conveyors, as well as updated his computer system. Screw conveyors were installed to make moving the clothes around the plant more efficient. The very shape of the new building also helps with the workflow; the previous old location was L-shaped, where the new area is a rectangle and offers more options.

One strategy that Watkins says helped him in the process was getting equipment ahead of time: “I didn’t buy a ton of new stuff, but what I did was buy it ahead of time, before we even built the building. It was sitting, waiting for me, and I got that part of it out of the way.” 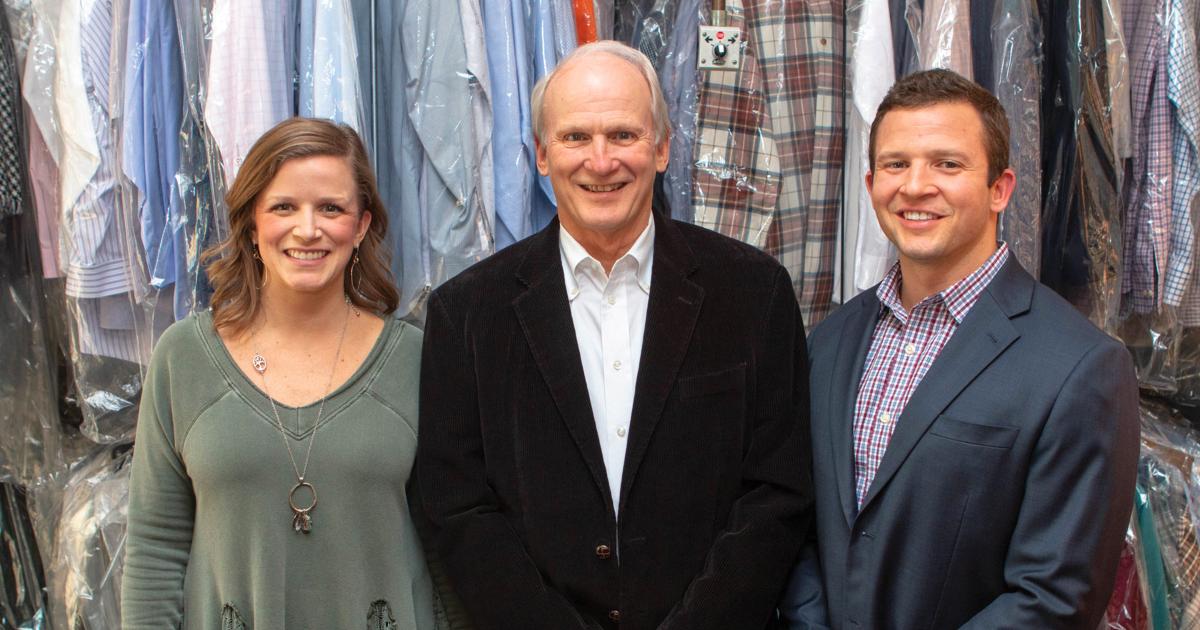 Mark Watkins, center, with his children, Sarah Watkins and Josh Watkins, operate Mark’s Cleaners in Birmingham. When traffic changes at his old store starting hurting his business, Watkins decided it was time to relocate. “My thought was, ‘Let’s move, have some more space for growth, and diversify a little,’” he says. (Photo: Mark’s Cleaners)