CHICAGO — Building a new plant is a milestone for dry cleaners. No matter if the new facility was planned for years in advance or was the best way forward as a result of a change in the old plant’s status, it’s a sign that the owner believes there are better days still ahead for the company.

Sometimes, however, unforeseen circumstances — like a global pandemic — can put that resolve to the test. In Part 1 of this series, we met a cleaner who needed to move his plant and decided to design a new one, custom built for his needs. Today, we’ll meet another cleaner in a similar situation, and how the pandemic affected them both.

Parkway Custom Drycleaning has a long history of serving the Washington, D.C., area, dating back to 1926. Its current owner, Jon Simon, explains that Parkway has been the area’s couture cleaner for decades, doing work not only for the general public but also for embassies, the White House, the Smithsonian, the Kennedy Center, and various high-end boutiques and department stores.

Although counter business is important to him (“There’s a certain percentage of the world who always wants to come in and show you the stain,” he says), routes make up about three-quarters of Parkway’s business. Since buying the business in 2001, Simon has expanded the services Parkway offers to include the cleaning of items such as area rugs, handbags, drapery, upholstery and more. “If it’s made of fabric,” he says, “we clean it.”

So, when the area where his store was located started to become more developed, Simon saw a challenge — and an opportunity.

“We were renting our old location,” he says, “and when they rezoned it about five years ago, putting in a Metro stop and a huge town center across the street, the landlord gave me notice that he was looking for a developer.”

Simon knew he wanted to buy the next property for his business and started looking for his next location.

“I wanted to control my destiny,” he says. Because the Washington real estate market is extremely competitive, Simon had to weigh his options. In addition to price, various zoning laws made it difficult to establish a drycleaning facility.

“If you’re building a plant over 3,000 square feet, for example, you must be in an industrial zone,” he says. “You couldn’t be in a retail zone in a commercial zone, so we couldn’t be in a strip center.”

Simon patiently waited for the right property to come along, and eventually found what he needed in Rockville, Maryland, north of Washington.

The building was portioned with a wall running down the length of it, giving him 10,000 square feet in a space that was formerly a tire company, with three automotive tenants splitting up the other half.

“They’re doing well and paying rent, and we have separate parking and entrances,” he adds.

The process wasn’t a quick one, however. “It took about a year of negotiating,” Simon says. “We had a closing date of early March 2020. And then the world changed.”

Almost a year to the day after Mark Watkins, owner of Mark’s Cleaners in Birmingham, moved into its new home, the bottom dropped out of the industry.

“We were making more money than we had made before working at the other place,” Watkins says. “The volume was up. Everything was up. And then, when COVID hit, we were down that first month in April 55%, with a building to pay for.”

He was alarmed but didn’t panic. Remaining positive is not an issue for Watkins. “We’ll get through it, though,” he says. “I promise you. It’s not a matter of ‘if’ — I will. No question about it.”

Watkins says that many around him questioned the decision to construct a new building at his age (73) but he knew that it was something that he had to do.

“I should be retiring,” he says. “I’m at that point and age where it’s been long enough. I’ve got a young son, Josh, who’s going to take it over, and I think he’s going to do well. I had people, all peers, asking me what the hell I was doing. Why was I doing this at this stage of my life? And I told them: This was the next step. It’s not just about building the business for my son; it was just the next step.”

In fact, Watkins wrote down his “business purpose,” a piece of self-talk he uses to keep driving toward success. “‘You said you had to move, and you have done the best you can,’” he says, reading the note. “‘Now attack it, and make it work.’ That’s all we can do. Just have the confidence that you’ve done the right thing. Keep the naysayers away from you and tell them to shut up. That’s what I do.

“If you’re going to do this, you’ve got to steal your mind away from doubt,” he says, “and do as much research, legwork and deep diving as possible. Ask all the pertinent questions to people who you think will give you good advice — not just anybody’s advice — and then tell people to leave you alone. They’ll scare you to death if you let them.”

As for Simon, when the pandemic lockdown started, he knew he had a choice to make: “I could have given up and walked away from a $200,000 deposit because I saw the writing on the wall, but I had a long-term vision.”

At the time, he never thought the pandemic would last as long as it has, but he has no regrets.

“Even if I had a crystal ball, I probably would have still done this because there’s nothing like owning, and I could control my own destiny.” Because the building is in a desirable area of town, he knew that, if the worst happened and he had to close his doors, he could still rent the property and be its landlord or sell it off.

Once Simon made his final decision and closed on the building, the real work began. “It was a complete gut job,” he says. “We had 20 to 30-year-old electrical, plumbing that was kind of a mess and no HVAC air handling.” Stripping things back to the cement block walls, Simon hired an architect and started the process.

Join us for Part 3, where we’ll examine the benefits of a new facility, and steps to take to make the transition as smooth as possible. For Part 1 of this series, click HERE. 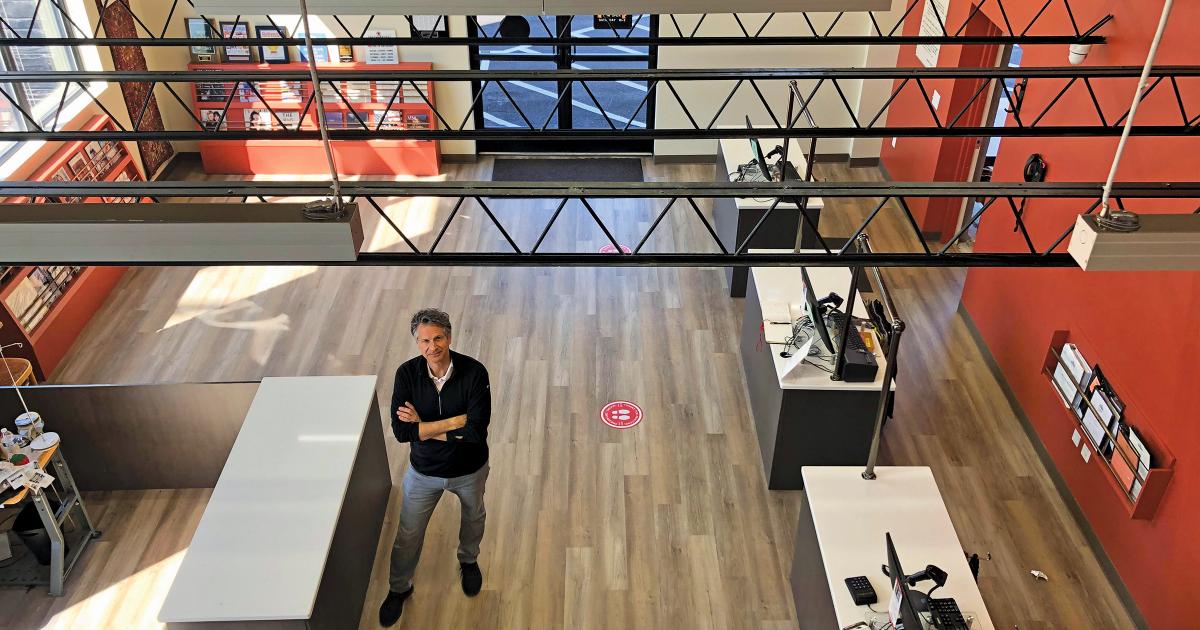