CHICAGO — Building a company that can stand the test of time is one of the most rewarding outcomes for any business owner. The odds, however, are against that outcome. In order to achieve this goal, steps have to be taken well in advance of the day they keys are turned over.

In Part 1, we featured two multi-generational dry cleaning businesses and learn their history. Today, we’ll examine some of the decisions that go into making this type of legacy a reality.

Fail to Plan? Plan to Fail

Both are anomalies when it comes to multi-generational businesses.

A 2010 study done by Bloomberg Businessweek found that the average life span for a U.S. family-owned business is 24 years. The study went on to find that approximately 40% of such businesses transition to the second generation, about 13% are successfully passed to the third and only 3% go on to the fourth generation and beyond.

For a family business to survive when the next generation takes the reins, Richard Ehrenreich, principal drycleaning consultant and business broker for Washington, D.C.-based Ehrenreich & Associates LLC, suggests making an honest evaluation.

“You’ve got to make sure that they just don’t feel entitled,” he says. “They’re going to need to do the work — to do what they need to do to run the business and stay focused.”

Ehrenreich, who specializes in drycleaner exit strategies and succession planning, recommends introducing children to the family business at an early age. Even if they don’t go into it directly out of high school or college, it’s still a good investment of time and effort.

“They can get out in the world, make their mistakes somewhere else, and then you bring them back,” he says. “They’ll have more ability to manage, and you can retrain them on the business.”

When selling or passing down a business, Ehrenreich recommends building a team to get the best value for everyone involved.

“You need a broker — one who knows about dry cleaning — who’s going to be the team leader,” he says. “The broker will work with a CPA tax attorney; an accountant; a business accountant who knows how the state’s laws work, knows how to properly do documentation and possibly has some environmental experience; an environmental consultant; your lender and perhaps a commercial real estate agent. Also, obviously, the seller. The broker is going to be the orchestra leader, with all these people playing their own instrument.”

Ehrenreich also believes that selecting the right broker is one of the most important decisions a dry cleaner can make when selling his or her business.

“So many business brokers work quantity rather than quality,” he says. “They take 30 or more listings, throw them at the sky, and whatever sticks, they jump on. You want someone with a small number of clients, and who has a good reputation among those clients.”

It’s essential, Ehrenreich says, to find multiple potential buyers for a business if selling outside of the family.

“If you’ve only got one buyer, you don’t have anything,” he says. “There will be no negotiation because they’ve got a chokehold on you. You need to have other buyers or at least the perception of other buyers.”

Moving in the Right Direction

Getting a proper valuation of the business can sometimes be difficult, because the owner’s emotions can quickly become entangled in the discussion. After all, the business has usually been a big part of their life and the lives of their family. Still, while it can be difficult to put a price tag on a business, it’s a step that needs to be taken.

Another difficulty Ehrenreich has often run into is that, for tax purposes, many small-business owners often want to minimize the profit they show during the year. He calls this practice “living out of your business.” This creative accounting can come back to haunt the owner when it comes time to sell.

“(During the evaluation), we take what the CPA comes up with at the end of the year as the profit, and we build upon that,” he says. “We have to have the confidence of the owner to be able to sit down with them and find out where all those little perks are. Maybe all of his kids have cell phones and cars, for instance. It all comes back to the bottom line.”

Also, when contemplating selling a business, Ehrenreich believes that things should be on a “need to know” basis in the beginning to avoid rumors and worries becoming real problems.

When it comes to the team, Ehrenreich has seen that fear can become a self-fulfilling prophecy if the owner is not careful.

“You want to be honest with your employees, but selling a business is complicated enough,” he says. “You don’t want 30 employees being part of the plan, asking questions and getting scared. They might start looking for other jobs, and if enough of them jump ship, you won’t have a ship to sail. Don’t make it more complicated than it already is.”

Come back Thursday for Part 3 of this series, where we’ll examine how a business legacy can give new generations a tremendous advantage as they move their companies into the future. For Part 1 of this series, click HERE. 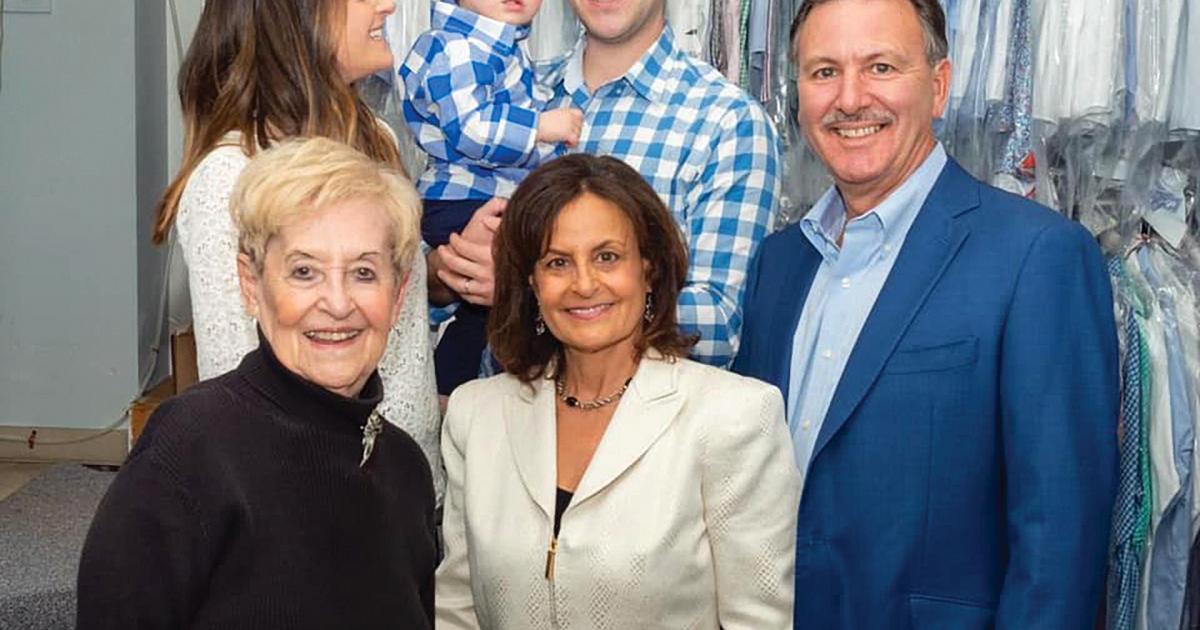 French Cleaners, located in West Hartford, Connecticut, is a rare instance of a family-owned company being passed through generations — and possibly beyond.  Pictured, from front left is Roz Gassner, wife of the late third-generation owner Mickey Gassner; Susan Cote, daughter of Mickey and Roz Gassner and wife of fourth-generation owner Phil Cote, at right. On the back row, left, is Elyse Hatch, daughter of Phil and Susan Cote, and wife of fifth-generation manager Mark Hatch. Their sons, Camden, center, and Trey (not pictured) could one day form the company’s sixth generation. (Photo: French Cleaners)