CHICAGO — Many business owners with children dream they will one day step aside and let the next generation take control. At that point, the business becomes more than just an occupation; it becomes a legacy. Dry cleaning has a rich tradition of multi-generational ownership.

But, whether the business is to be handed over to family or is to be sold as the cleaner retires, the key to a successful transfer — and the company’s very survival — lies in putting in the groundwork long before it’s time to make a change.

Balfurd Dry Cleaners is a family-owned business that started serving the State College, Pennsylvania, area 94 years ago, and Monika Manter, the company’s vice president, represents its fourth generation. She officially started working for her father, Bob Fogelsanger, in 2011.

“I was working as a school guidance counselor and moved back to town, you know, ‘temporarily’ and took a position as a customer service representative,” she says. Manter worked her way up through service and marketing areas of the business. After her grandfather, Scott Fogelsanger, died in 2014, she took the position as vice president a year later.

Manter’s relationship with Balfurd goes back much further, though: “As a child, on Saturday mornings, Dad would go in and do inventory at our plant. I used to bring my roller skates, because there is no better place to skate than a drycleaning facility when nobody’s working.”

Manter didn’t see herself stepping into the business, however, having gone to graduate school to prepare for a career in guidance counseling.

“As a child growing up in a family business, you see the stress and the amount of time your family puts in that business,” she says. “And, as a dumb kid, I thought, ‘Oh, man, I want to do something easier.’”

While she enjoyed her work as a counselor, seeing the drycleaning business as an adult opened her eyes to a new reality.

“After I got married, my husband and I decided to move back to State College,” she says. “A few months into working at the store, I tagged along with my dad to a cost group meeting and heard those owners and their elevated talk about their business challenges and how they’re innovating. I just realized that this is about so much more than pressing shirts. That is what really got me hooked into wanting to be in the business permanently.”

Although she changed her career path, Manter believes her previous counseling training still serves her well.

“I think it is advantageous that I have a past career in counseling,” she says. “I’m a personality test junkie, and I want to make an effort to understand myself and everybody around me. I want to understand the best way people take feedback. And I think great leaders are able to capitalize on things they’re good at, and then improve or outsource other areas.”

For French Cleaners in West Hartford, Connecticut, the 110-year-old business hasn’t been handed down the bloodline for the last couple of generations — it’s being passed down from son-in-law to son-in-law. Since 2016, Mark Hatch, manager of the company, has been working in the business with his father-in-law, Phil Cote, who bought the business from his own father-in-law, Mickey Gassner, in 2000.

Hatch married Cote’s daughter, Elyse, in 2012. At the time, Hatch was working in process engineering and R&D for Mars Petcare and later Mars Chocolate. “I’ve had a crazy career history,” he says. “I made M&Ms, and before that, I made pet food.” When they married and began thinking about raising a family, Hatch started to reconsider his career, which had him on the road about 50% of the time.

“I had always joked with Phil, telling him I would go into the cleaners when I retire,” he says. “But then I started thinking, ‘Well, that’s stupid — I should go work for him now.’”

Cote was receptive to Hatch’s change of heart.

“I spoke with Phil and said, ‘You should teach me everything you know. I’d rather work hard for you and help pay you and the family back rather than work for another company,’” Hatch says. “We were fishing in Florida when I floated this to him, and he said, ‘All right, sounds good. Come in on Monday.’ I told my boss at that time that I was quitting because I got an offer I can’t refuse.”

Hatch dove into the deep end on his first day on the job. “That first day, we started cutting out a hot water heater,” he says. “I was immediately thrown into it.”

In the beginning, Hatch spent much of his time shadowing Cote, learning the business from his perspective, and then shadowing people in various departments.

“I would talk to the pressers, watching them do their job all day, just trying to get totally immersed,” he says. “This business is the polar opposite of where I came from. When you go from a 10,000-person corporation to a 20-person drycleaning company, the pace is different.”

Because Cote had lost a production manager just before Hatch joined the company, that role became a natural starting point as he started to show his son-in-law the ropes. “I focused on production — what can we do to optimize the plant? — and worked in that area early on to get the know-how and see how things operated,” he says. Hatch then started to work on the front counter and the customer-facing side of the business, and then moved to the general administration aspects.

“I’m still picking up things every day, and learning a lot,” he says.

While Hatch was new to the drycleaning business, some experiences from his youth came in handy: “I was raised on an orchard in Ohio, so I grew up in a family business. Then I went to college, got a corporate job, and then circled back. So, a lot of this stuff feels natural to me.”

Hatch also brought some of the skills he learned from the corporate world with him.

“I worked in an R&D role, trialing new products, and a lot of my job was generating buy-in from the plant to let us do new things,” he says. “I was always convincing operators who had been there 20 years to try crazy stuff on their machines. So, I gained a lot of influencing skills in my old role, and that’s been monumental. It’s hard to gain trust and generate rapport with people who have been here forever and might see me as an outsider, so that’s definitely helped.”

Leading Into the Future

The path to succession has been gradual for Manter, which she believes benefits everyone involved.

“We still haven’t completely transitioned over,” she says. “Over the last few years, we’ve been transferring ownership. My dad is still slightly the majority owner of the company, but he’s only involved on a very high level. We do have a succession plan in place, with that happening in the next few years.”

Manter says she’s in no hurry to speed the transition because the path they’re on will only make better leaders.

“This slow transition has helped both me and my husband, Dave, who also is involved in the business as our director of operations,” she says. “We’ve been able to make progressively bigger and bigger decisions, really build our confidence and it’s allowed us to make mistakes and figure things out. It’s been helpful that it wasn’t just a flip of a switch.”

Things are similar at French Cleaners. While the transition is underway, Cote still plays an active role in the company. “He’s involved in the day-to-day operations,” Hatch says. “He’s just gradually doing less. We talk each day, and we share an office. We network, check on things together and teach each other things.”

Come back Tuesday for Part 2 of this series, where we’ll look at steps cleaners can take to make a successful transition to a new generation — or a new buyer. 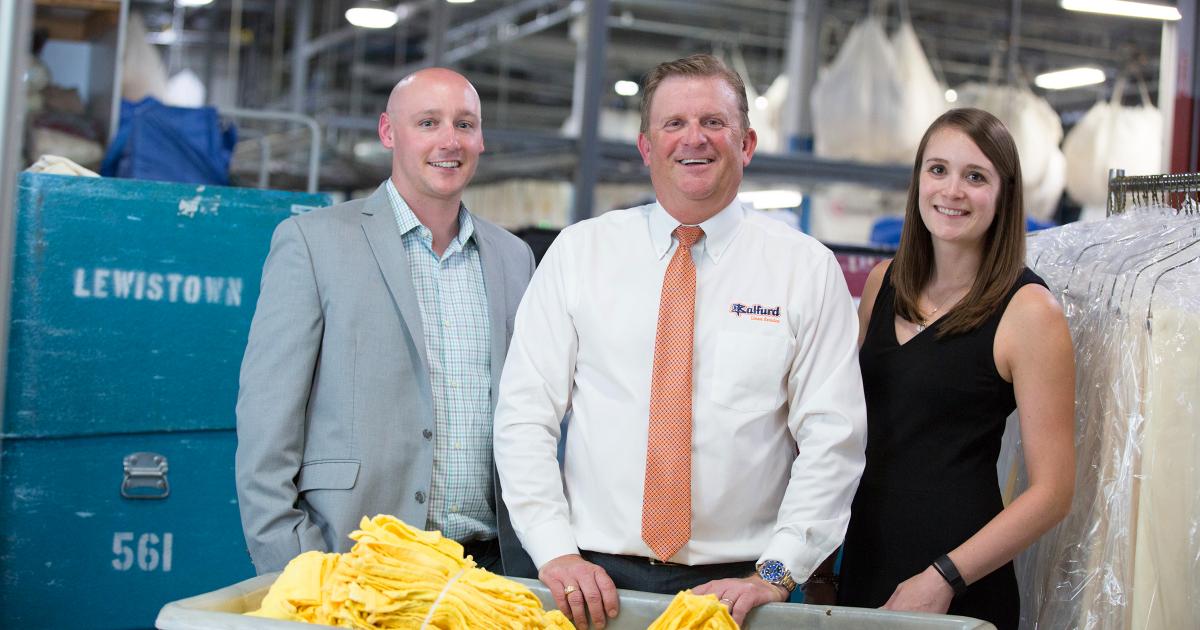