CHICAGO — There’s an adage that says, “The best place to fish is where the fish are,” meaning that picking the best location is one of the most critical decisions you can make before casting your first line.

This thought process of selecting the right spot is also valid in the world of service and retail business. Several factors go into finding that perfect location for a drycleaning establishment — and successful cleaners take the time to find the place that best suits their business needs, rather than settling for the first available opening.

“Location was our No. 1 challenge, of course,” says Paul Zeck, owner of Andy’s Cleaners, located in Oak Ridge North, Texas, a half-hour north of Houston. The company’s first plant — a 5,000-square-foot structure — opened this year. “In our case, we wanted to be close to home, on a major thoroughfare and have dependable utility service. These items, along with having a spot that would allow us to have a drive-thru service, were all issues that, for us, were non-negotiable.”

The process of finding a plot to build upon turned out to be much more complicated than Zeck first anticipated.

“Over the course of the year, I got very well acquainted with my commercial real estate agent,” he says. “We looked at possible sites and contacted many owners inquiring about their interest in selling. Finally, in August of 2019, we closed on a 1.4-acre tract. It was our first choice for a long time, but it seemed it would never happen. The owner was very reluctant but finally came around.”

The land Zeck found checked all the boxes he had set out for himself. In addition to having the proper utilities, his plant and storefront are located on a major east/west commuter road into The Woodlands, a master-planned community in the Houston metropolitan area.

To get his business up and running, however, Zeck had to navigate some legal challenges.

“Our new location had to be annexed into a small city of 2,500,” he says. “Oak Ridge North has a great water source, good sewage treatment, natural gas and everything else we needed, and the city council was excited to have us. The process of annexing, however, was a study in patience. It took almost four months before we could break ground — but we knew it would happen.”

Of course, building a new structure isn’t the only way to open a cleaning business. Finding the right fit within the existing retail space requires careful study of the area and the surrounding customer base. Linda Mitchell, the owner of Trinity Dry Cleaners in Lawrenceville, Indiana, has opened two locations for her business, and she’s had the same strategy for both storefronts.

“When I opened my first store and plant in 2014, and again when I opened the drop store in 2016, I looked for locations that are close to a major grocery store, in my case Kroger,” she says. “My thought process is that most consumers are visiting that store weekly, so my exposure would be greatest near them.”

Mitchell has found success in locating her business in strip mall facilities, but she had a plan in mind when it came time to make the final selection. “I like to get corner properties,” she says, “so both of my locations are near Kroger and are in the end positions of strip malls.”

Check back Thursday for Part 2, where we’ll look at what goes into the location decisions of a cleaner who has been in the business for decades. 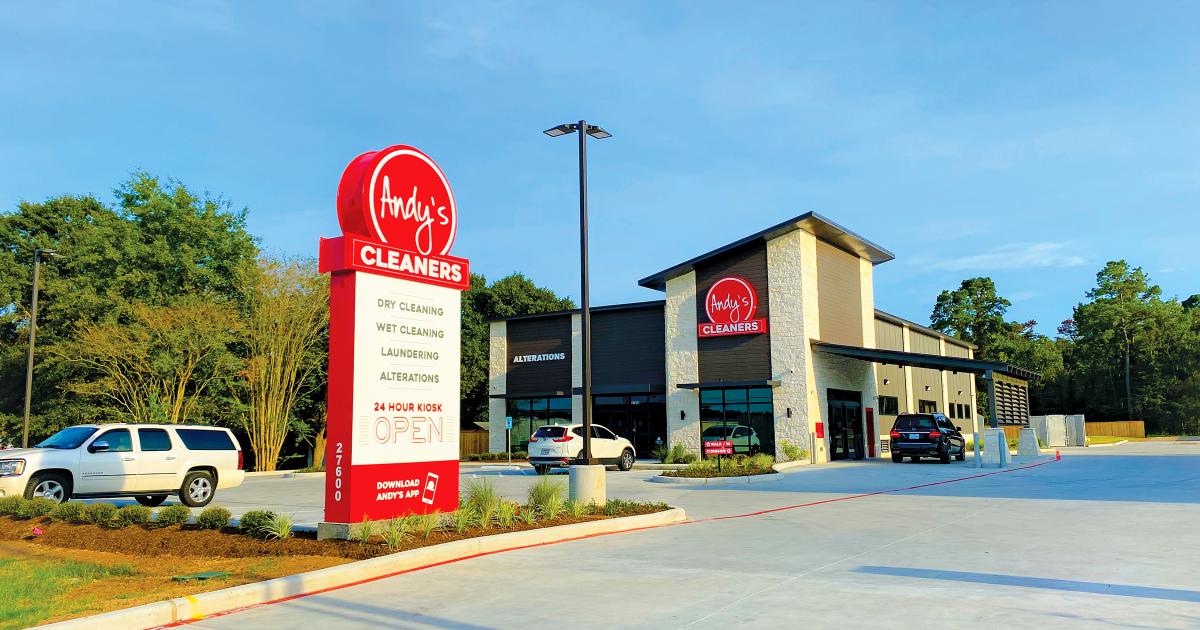 Paul Zeck, owner of Andy’s Cleaners in Oak Ridge North, Texas, had a list of things he wanted at the location he selected for his new business. “We wanted to be close to home, on a major thoroughfare and have dependable utility service,” he says. While he had to jump through some annexation hoops, Zeck found a 1.4-acre track perfect for his plant. (Photo: Andy’s Cleaners)