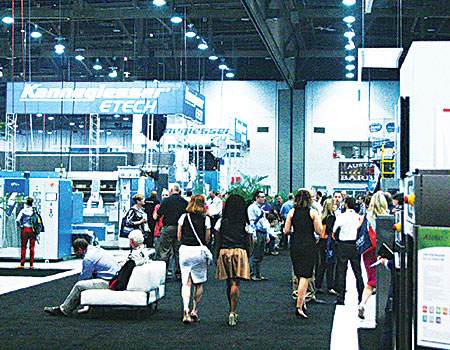 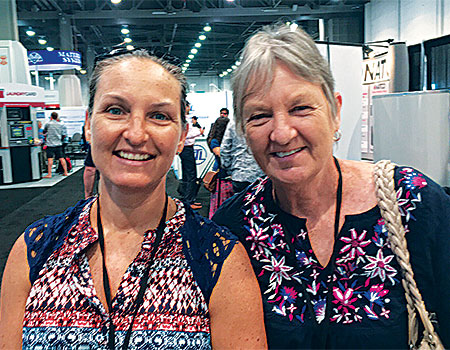 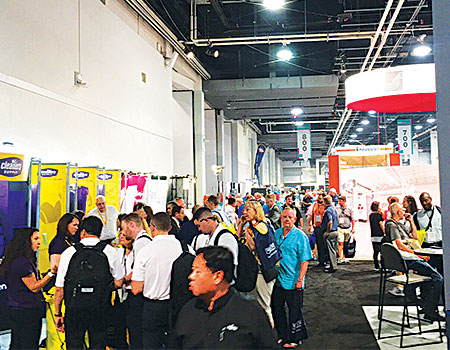 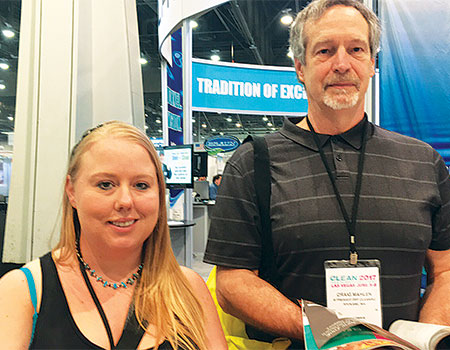 Clean, like the fabricare industry, seems to be reinventing itself

LAS VEGAS — The odds were with the house on this one, even before “Clean version 2017” unveiled itself in mighty-brighty Las Vegas.

The sold-out exhibit of nearly a quarter-million net square feet of expansive double-wide floor space told anyone paying attention that weeks beforehand. The chatter from so many making plans to attend made the tea leaves easy to read.

But nothing could prepare anyone for the strong turnout of attendees, more than 12,500, and the high-energy, sheer “Coriolis effect,” palpable as a refreshing wave, at this fabricare industry tilt.

If Vegas lived up to its hype as the frenetic host of this “game,” then Clean ’17 was the bold roller who let it all ride, earned the winnings, cleared the table, and took home all the juice.

The faces of dry cleaning were apparent from all comers — and all corners of the United States. There was also a sizable, noticeable contingent of international drycleaning operators as well, intent on having a great time.

All seemed abuzz with the razzle-dazzle of Vegas and also caught up in the back-roar of an industry yearning to renew itself right before your eyes. Desert blooms outside, in striking red and yellow, weren’t the only amazing things reaching up to be noticed in the hot Nevada sun in June!

It was no coincidence that many session speakers were youthful. Phrases such as “apps,” “web platforms” and others came rolling eloquently off their tongues at talks packed with attendees thirsty for ideas and ready to re-imagine their operations with a fresh perspective.

“Clean 2017 was outstanding! There was so much energy and excitement on the floor, and it didn’t hurt that we sold out exhibition space and had a greater number of attendees,” says Mary Scalco, show chair and CEO of the Drycleaning and Laundry Institute (DLI).

“When there is a lot of activity, it makes standing on your feet for 10 hours a lot easier and, of course, robot ‘Press-ton’ kept everyone entertained.”

The sponsors’ booths acted as a sort of transition point from the lower hall area to the upper hall area, up a few wide stairs.

He adds: “In speaking with many exhibitors both during and after, it quickly became crystal clear how pleased they were to see so many customers and potential customers with real buying interest.”

Attendees flocked to the upper exhibit area near Cleaners Supply in the 800s, near CompassMax in the 500 aisle, and near Starchup in the 400 aisle, just to name a few hot spots.

While in Las Vegas, DLI also conducted some important association business. It appointed Mike Nesbit of MW Cleaners as its new president. Nesbit was on hand for the opening ceremony when Scalco sliced through the ribbon using oversized scissors.

“As Barnum and Bailey would say, ‘The greatest show on earth!’ That is also how I would describe Clean ’17,” says Nesbit.

“For those of you that got to attend this year’s show in Vegas, you were part of the largest Clean in the last 20 years. That was both attendance and size!”

Although the industry is facing some uncertainly, he points out, “what was certain is there’s still plenty of interest in the latest equipment, technology, and supplies.

“On behalf of DLI, the board of directors, and staff, we would like to send our appreciation to the vendors and attendees.”

The talking robot Press-ton would agree. He made many attendees laugh as he roamed the event, and not all were from the U.S. Scalco points out that 96 countries were represented at Clean ’17. About one of every five attendees were visiting from beyond our borders.

International flavor abounded at the Vegas show. Two drycleaning owners from Mexico were looking for ideas and, as one put it, “seeking out new business opportunities.” They held up their bags, chock-full of “information.”

“Our first time,” the woman says, setting her bag by her feet and gesturing with both hands showing how overwhelming it all is. “Whew!”

They were hurriedly heading off to an educational session, one of many being offered throughout the show dates. They were hoping to get there early because talk on the floor was how the sessions were standing-room only, and deep at that.

Such was the high interest from attendees seeking to hear topics being presented.

On Clean’s first morning, the opening educational session, Business as Unusual, gave a glimpse of what this entire Clean Show would be: Youthful energy, by fabricare industry professionals of all ages!

The room bulged to far-over capacity, as young go-getter businessmen presented their views of business to a crowd hungry for ideas and to gain a better understanding of the new ways beginning to sweep into the field.

For instance, Nick Chapleau of Starchup tells the audience that dry cleaning is much more than suit-and-tie: “When partnering, make sure to partner with someone who will advance your brand.” Pens were jotting, cellphone cameras snapping. Ovation.

Then Kyle Nesbit, MW Cleaners, describes his business serving single-tenant office buildings, calling it the “most successful” of all the locker ventures he’s tried yet. More strong applause from the estimated audience of 400.

All educational sessions were open to all attendees no matter their background.

Balestracci reminded everyone in the room to “resolve issues that come up as fast as possible, (and) make the customer happy,” later adding, “Making a ‘fix’ isn’t a ‘claim,’ it’s a marketing opportunity!”

Moore concluded with this remark: “We had a nice Ralph Lauren shirt, the cuff got ripped.” As the cleaner, they have responsibility and must own it, he says. “The dry cleaner said, ‘We washed it, we ripped it,’ and took responsibility, gave their good customer a credit.”

One morning, Methods for Management (MfM) hosted an early breakfast talk at a nearby hotel. Tom Stites from Unipress, Bill Odorizzi of Sankosha, and a couple dozen drycleaning operators were among the audience who joined Diana Vollmer, one of the company’s principals as well as a columnist for American Drycleaner.

Then back to the convention center and the session Five Considerations on Improving Employee Retention, presented by Brenda Stauffer, HR director at Balfurds Inc.

She encouraged drycleaning operators to engage with their employees and then asked if they would now, likewise, engage with the room and share stories.

Another full-to-the-brim room of attendees had a microphone at their convenience, which was passed around up and down the rows of people.

One audience member says that Wednesdays is “sharing meals day” at their dry cleaner. “Where we bring in a snack.”

Another says they “love the middle-aged employees [cue laughter] who care so greatly!” Plenty of heads nod affirmatively.

The presentation ended in loud applause, and many attendees lingered to talk to Stauffer as though they didn’t want it to end, even as the next session was setting up.

During a private moment out in the hallway, she shared that it’s about “treating employees as allies, thinking in terms of a ‘tour of duty.’” She adds that “a good fit is really the key.”

Late that afternoon, tired feet shuffled to a high-curtained area tucked just off the exhibit floor. It was the Show Floor Classroom: dark, cool, almost soothing to the senses, and a nice getaway from the high energy just steps away on the upper exhibit area.

In the amphitheater-like setting, a softly glowing neon blue-green Clean Show logo hung like a sleepy, incandescent moon over the dark-curtained stage.

DLI’s Brian Johnson leapt up there and soon was telling the audience what happens when an item like a felt fedora gets thrown into a dirty puddle. His session, Oops, Now What?, dealt with home remedies for cleaning items and whether they were legitimate.

Every single seat was filled, which is quite an achievement at 3:30 in the afternoon when one might expect people to be a little spent and maybe back soaking in their hotel bathroom tub by now, or at the poolside bar, or the craps table!

Back to the dirty fedora: “We let it dry,” Johnson says, “Aged three days. Sprinkled baby powder on the stain, gently rubbed it.” This remedy sort of worked, he decides. “Then I used a brush. That worked better. So it passed the test.”

In the next test, dirt on suede, he used another home remedy, stale bread.

“Stale bread worked,” he notes as the projected video shows a woman using stale bread to rub out a stain. And it’s gone!

On a personal note, while a veteran of many trade shows in a long career, it was my first Clean Show. What impressed me the most, among the good people and happy faces, was a silly little comment from someone who has nothing to do with the show but everything to do with business in general.

As my cab to the airport left the hotel driveway, the driver asked, “Is Clean over?” I said, “Yes.” At the stop sign, he turned back to me and said, “Boy, we’re going to miss you guys. It’ll be boring next week. You gave us a lot of business but you know what? Just a great group of people. Nice, friendly and real. I sure hope you’re back.”

In a way, it seemed like he was talking about the fabricare industry — it is, indeed, coming back strong!

The Clean Show will return June 20-23, 2019, to New Orleans. It’ll take some kind of event down in The Big Easy to out-spin this one. Clean ’17 against a stellar Vegas backdrop was special. The whole thing will be remembered in lore as full of razzamatazz.

Was Sinatra right when, long ago, he sang, “the best is yet to come,” to a Vegas showroom?

Only time will tell.

The faces at Clean ’17 were inquisitive, numerous and smiling. Strong signs, all.

Clean, like the fabricare industry, seems to be reinventing itself right before our eyes. Young again, and with a new breath of fresh air just now breezing in!