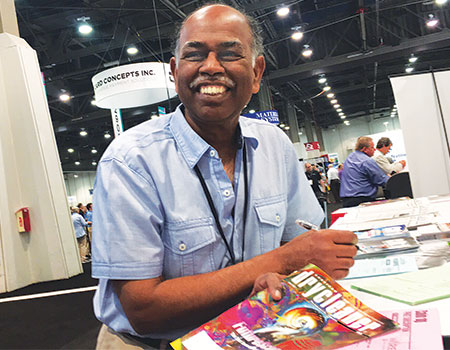 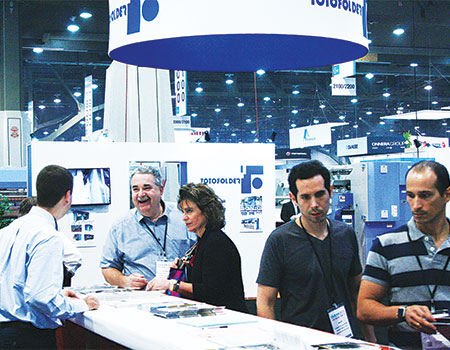 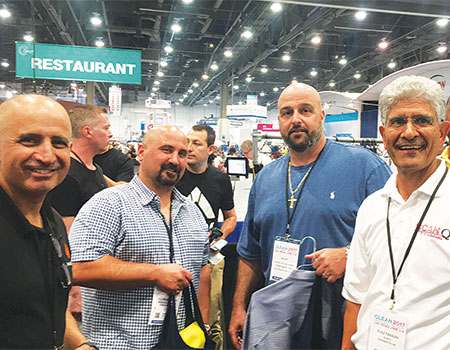 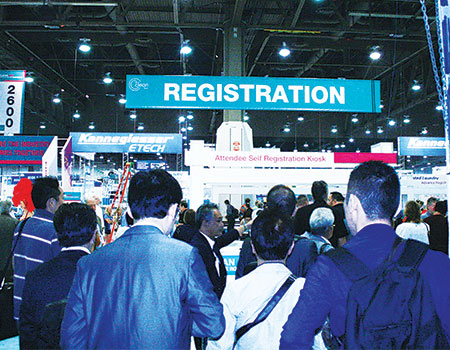 Drycleaning owners came from all over U.S. and world

LAS VEGAS — The odds were with the house on this one, even before “Clean version 2017” unveiled itself in mighty-brighty Las Vegas.

The sold-out exhibit of nearly a quarter-million net square feet of expansive double-wide floor space told anyone paying attention that weeks beforehand. The chatter from so many making plans to attend made the tea leaves easy to read.

But nothing could prepare anyone for the strong turnout of attendees, more than 12,500, and the high-energy, sheer “Coriolis effect,” palpable as a refreshing wave, at this fabricare industry tilt.

If Vegas lived up to its hype as the frenetic host of this “game,” then Clean ’17 was the bold roller who let it all ride, earned the winnings, cleared the table, and took home all the juice.

The faces of dry cleaning were apparent from all comers — and all corners of the United States. There was also a sizable, noticeable contingent of international drycleaning operators as well, intent on having a great time.

All seemed abuzz with the razzle-dazzle of Vegas and also caught up in the back-roar of an industry yearning to renew itself right before your eyes. Desert blooms outside, in striking red and yellow, weren’t the only amazing things reaching up to be noticed in the hot Nevada sun in June!

It was no coincidence that many session speakers were youthful. Phrases such as “apps,” “web platforms” and others came rolling eloquently off their tongues at talks packed with attendees thirsty for ideas and ready to re-imagine their operations with a fresh perspective.

‘THIS ONE IS SPECIAL’

Many drycleaning owners walked the busy aisles inside the vast exhibit hall with smiles on their faces.

“Love it,” says Kanak Raj, owner of Crown Cleaners & Formal Wear, Sonoma, Calif., who pauses at the American Drycleaner booth to explain he never misses the Clean Show. “This one is extra special. Great feel.”

He’s from wine country, and laughs about the clothing he cleans, often wine-stained.

Raj has been coming to Clean for 30 years and notes its impressive size and educational value. Holding a recent issue of the magazine, he mentions that he loves how it looks now. “It always keeps me in touch with what’s going on,” he says before heading down the aisle to see more booths.

Las Vegas is where the fabricare industry came to play, to see and learn about products and equipment and share ideas in dry cleaning. Many attendees came from beyond our borders.

“Just having a great time here at Clean, so much to see, and Vegas is great, we’ve been before,” says Bev Aitken with her “mum” Dot by her side. The two own Somerville Drycleaners in Melbourne, Australia.

“Come down to Melbourne some time and we’ll put you up,” Bev says with a wink, arms full of materials she’s collecting from booth to booth. They pause for a photo, then wade into the river of attendees, quickly disappearing down the blue-carpeted way.

“I’ve seen a lot of these shows, almost since the very beginning,” says Mark Witt Sr., of Arcadia Cleaners, Phoenix, Ariz., in Vegas with son and co-owner Mark Jr.

In a hotel ballroom not far from the convention center, he’s chatting at an after-hours cocktail party thrown by two of Clean’s sponsors. and enjoying the double buffet of seafood choices and carved ham and roast beef.

“I’m glad to see some of the older, more dependable businesses having a strong presence at the show,” adds Witt Jr. “I took it as a positive sign for the industry as a whole.”

The large space is jammed full of attendees blowing off some Nevada steam.

“This is perhaps the best-attended, biggest show I can recall, maybe since back in the beginning,” Witt Sr. adds with a knowledgeable, wry grin.

The night, like other nights, will be full of events and parties all over town, many hosted by exhibitors such as Continental Girbau, GreenEarth and others.

On the show floor, many vendors indicated strong interest from the big crowds filling the aisles and checking out all the goods and products. Exhibitor after exhibitor remarked that sales and/or leads were great.

Poseidon rolled out its new Wet Cleaning Machines, shirt laundry plus washers and moisture-sensing and reversing dryers. The dryers were on display for all booth visitors, and Quail told onlookers: “Key features are its ability to create steps in the dry cycle similar to what we see in the wash cycle.”

Midway up another packed aisle, a group of drycleaning operators converged to pause and watch with fascination an LED information display above the conveyor rack of shirts in ScanQ’s booth. Company owner Evaz Fanaian was grinning.

They were looking at LARA, which stands for LED-Assisted Rapid Assembly. Fanaian says, “It’s a new system, used to decrease assembly time and eliminate operator error.”

Partnering with the firm Dark POS, Inc., which develops point-of-sale and customer relations management systems for dry cleaning, the LARA garment management system brings together cloud-connected devices, the Internet of Things (IoT) and distributed computing to the shop floor, allowing a staff to assemble hundreds of garments in a fraction of the time, he says.

“The system,” Fanaian points out at his booth, “allows drycleaning staff to track garment pieces and automate assembly through simple visual cues provided by the LARA garment hangers.”

The system requires the latest Enlite version 10 for LARA garment hangers as well as a garment tagging system, he notes.

His firm introduced to North America what he calls “a highly effective and environmentally friendly alternative to drycleaning processes — Softwash®.”

Softwash delivers a total cleaning solution that is easier to work with than perc, he says, and achieves far superior results on a wider range of stains and fabrics.

The end results, Primus notes, are a cost-effective setup for any size of cleaning operation; and 20-30% cost reduction per 2.2 pounds of textiles cleaned, leading to overall improved profitability.

In addition, it can provide customers with a turnkey solution, one that is already delivering results for clients in more than 50 countries around the world.

“We’ve been focused on providing innovative solutions for more than a century,” Hatt says. “Founded in 1911, we got our start as a manufacturer of household washing and dishwashing machines.”

He also adds that Alliance Laundry Systems has a brand-new lab in the Czech Republic called the Star Center; there’s a YouTube-type video available that shows off the modern, trés chic facility.

The grand hall outside is a great-carpeted-way full of Vegas memorabilia on the walls, that all attendees use, to go in and out of the exhibit space to coffee-up, find a session, grab a bite to eat, take a breather, or wander outside to experience a bit of the soul-sucking, fire-baked thing they call daytime here.

Up in the high side of the exhibit canyon, in the 800 aisle, Foster-Stephens has added to its line of products with new wedding dress bridal storage and travel boxes. They are cleverly arranged in eye-catching stacks along the booth’s curtained back wall.

“Our new wedding dress bridal storage and travel box is something totally new and different from Foster-Stephens,” says Nancy Jones, company president. “We are excited by this opportunity to help our customers with their travel needs as well as their preservation needs.”

The travel box is foldable for easy storage, or putting into a suitcase. It’s a solution for bringing a wedding dress or bridesmaid’s outfit on a plane.

“Lightweight and collapsible, our luggage is made from non-woven material and is water-resistant,” she notes. The boxes hold up to 10 pounds. The open dimensions are 22 by 14 by 8 inches; while folded, it is 1 inch high. The boxes come in pink, purple, or black.

Equipment speed and/or convenience were recurring features in many products at many booths.

Over in the front by the wide aisle near the breezy entrance, A.L. Wilson Chemical Co. President Fred Schwarzmann talks not only about the terrific show traffic but also about some late-arriving attendees who, he guessed, were maybe out on the town the night before: “A few rolling in a little slowly this morning, but hey, they’re here. Strong, like all the days. Great!”

His booth had just been two-deep in drycleaning operators checking out his latest, The Laundry Two — a combo of spray spotters, Laundry TarGo and RiteGo, chlorinated solvent-free, California 2013 VOC and Prop-65 compliant.

At Trevil America, company President Stuart Ilkowitz pointed to his new Presto FC shirt finishing machine at the far corner of his booth space as another demo of this single-buck, hot plate shirt finisher was under way.

Attendees plugged up the wide aisle, watching. “It’s been like this, non-stop,” he says.

Parker Boiler showcased a 9.5-HP, 150-psi, packaged steam boiler unit, in all-black (like something cool out of the flick Batman), new in 2016, called the Vertical Water Wall. After just a few words, National Sales Manager Mike Leeming was off to chat with drycleaning operators who were looking it over.

Elsewhere, there was a private demo of Garment Management Systems' newly redesigned QuickSort automated assembly system with Rapid Movement Technology. Brett McLeod demonstrates how it works, feeding a shirt through the system and explaining the convenience is in “the way the system attaches the label before bagging up near the top of the hanger, then the invoice, and then into the power roller for bagging.”

The Sankosha booth early in the show was brimming with attendees chatting with Bill Odorizzi. Later, he presses a suit coat and is asked how he likes the show. “Love it. It’s great,” he says with a grin.

On the last day, a Sankosha employee demonstrates a double-buck to finish two dress shirts at his company’s expansive booth. The employee is engaged with a drycleaning owner.

Nearby, Columbia/ILSA representatives were talking business with several customers. President Stephen Langiulli only had time to wink, as he looked to be closing a sale.

It was just that kind of atmosphere all four days. Full-throttle exhilarating, squeezing lunch in, getting on to evening all too quickly.

An exhibitor passing by on the last morning said, “Never seen a show so consistently strong. Amazing.”

Representatives from Itsumi, Albatross-USA, Renzacci and others echoed that sentiment. It became a message pleasantly rinsed and repeated, with grins. Often, “wow” was thrown in.

Adam Weber is president of Irving Weber Associates Inc. (IWA), which has been attending Clean Shows for more than 35 years: “I have to say that this year’s show, in Las Vegas, was one of the most successful Clean Shows we have attended.”

Maestrelli’s DreamClean ecological multi-solvent machine was eye-catching. Maybe it was the name. It might have been an undertone for the whole show. Owner Giacomo Fontana saunters over and says it is his first Clean Show. “Won’t be my last,” he adds. “Fabuloso!”

In the 1500 aisle, Union/Realstar’s Steve Henley grins amidst the companies’ gleaming, workhorse line of drycleaning machines in the 30-90-pound range. “Too busy to eat,” he mouths, shrugs and returns to a conversation with customers.

That’s the way it was, over and over, at this 40th anniversary of the Clean Show. Since 1977, it has brought the industry together to not only display equipment and services, but to put face to name. This is the industry’s “face,” and it is upbeat and youthful in expression.