KENTWOOD, Mich. — “It was something I could do,” says George Cares, of launching Sheldon Cleaners, in 1949. During its 66-year history, the company has reinvented itself multiple times; embraced and eliminated revenue streams; and overcome economic and industry-specific hurdles.

Sheldon Cleaners eliminated the use of perchloroethylene (perc) in 2006, substituting a solvent created with n-propyl bromide-based detergent—for a few years.

“We were losing interest in dry cleaning,” he says. “We didn’t want to buy more perc machines because perc is harmful to our employees, us, and the environment. But our drycleaning machines were becoming corroded ... We were at a crossroads.”

That’s when they turned to Michael “Stucky” Szczotka, who had sold them a few Continental Girbau soft-mount washers through the years that the brothers loved. Louie and Paul called Szczotka about developing a vended laundry.

While Szczotka was all for helping the Cares brothers develop their first vended laundry, he was also adamant they upgrade their drycleaning plant.

“He came in and pumped new life into Sheldon,” says Paul.

A complete plant overhaul commenced that resulted in huge throughput gains and labor and energy savings, according to the Careses. Simultaneously, Szczotka helped Louie and Paul design and equip their new, high-speed vended laundry.

“We are using less water and energy and delivering better quality,” says Paul. “One of our ads says, ‘We wish all cleaners would go green!’ We have a smaller carbon footprint here than most people have at home.”

Once garments are dry-cleaned, they’re hung on a 1,500-foot rope conveyor—which Paul invented—and transferred through the finishing stations. That conveyor carries items through the plant at a rate of 500 feet per minute.

Older single leggers, pant toppers and puff irons were replaced by eight Unipress pant-pressing stations, which have cut labor hours and boosted throughput and quality. Each station features a double legger, tensioning topper and single puff, according to Szczotka. “Each station is identical so it simplifies employee training,” he says.

Once pants are pressed, they are returned to the rope conveyor and travel to inspection. Other items, such as suit coats, jackets, dresses and blouses, are pre-finished at one of two stations consisting of two Unipress Versaform plus with Collar & Cuff or two Sankosha Rotary Tensioning Form Finishers. They then move on to utility presses.

The decade-old Continentals continue to offer great productivity and quality, according to Paul. Because they reach 384 G-force extract speeds, they remove more water during extract (when compared to lower-speed washers and hard-mount washers), which cuts resulting dry time. They are also highly efficient and programmable, which allows Sheldon Cleaners to control every conditional aspect of the wash process, while cutting operational costs, the company says.

After shirts are washed, they are finished using six new Unipress Hurricanes and three Quad Tensioning Rotary Collar & Cuff units. The equipment is arranged in three sets, with each set consisting of two Hurricanes and one Quad Collar & Cuff unit. The new machines require three teams of three, for nine total operators. The prior machines required 20.

“The new machines, with their nine operators, produce up to 540 shirts per hour, or 180 shirts per station,” says Paul. “That’s greater than a 50% increase in throughput.” Moreover, he says he’s thrilled with the shirt-finishing quality.

Once items pass through finishing stations via the rope conveyor, they are inspected, bagged, labeled and sorted by a new Metalprogetti automated assembly, bagging, labeling and sorting system.

Previously, items were manually sorted and bagged at the satellite stores. Now, they are automatically done at the plant, saving approximately 500 labor hours per week. It will save $250,000 per year in payroll and realize a 15- to 18-month return on investment, says Louie.

Finally, gains in energy efficiency have reduced operational costs and improved profits. A new air compressor costs just $30 a day to operate, compared with the old compressor’s $100 per day. “It monitors the demand of load and if it’s not requiring 100% load, it adjusts itself,” says Paul.

Sheldon Cleaners is set up for greater profitability. “We are projecting a 10-15% elevation in profit,” says Paul.

Throughout the plant, the brothers added inverters to motors that didn’t have them. “The Continental washers and Union SystemK4 drycleaning machines all have inverters and save a considerable amount of energy by eliminating energy spikes,” says Paul. “That’s why we added inverters to other equipment, including water pumps and the dry-vacuum system.”

All told, Sheldon Cleaners is more productive, efficient, green and profitable than ever, according to the Careses. Plus, it occupies a 20% smaller footprint, which is how Louie and Paul were able to carve out 6,500 square feet for their new high-speed vended laundry and café.

Check back tomorrow for the conclusion!

If you missed Part 1, you can read it HERE. 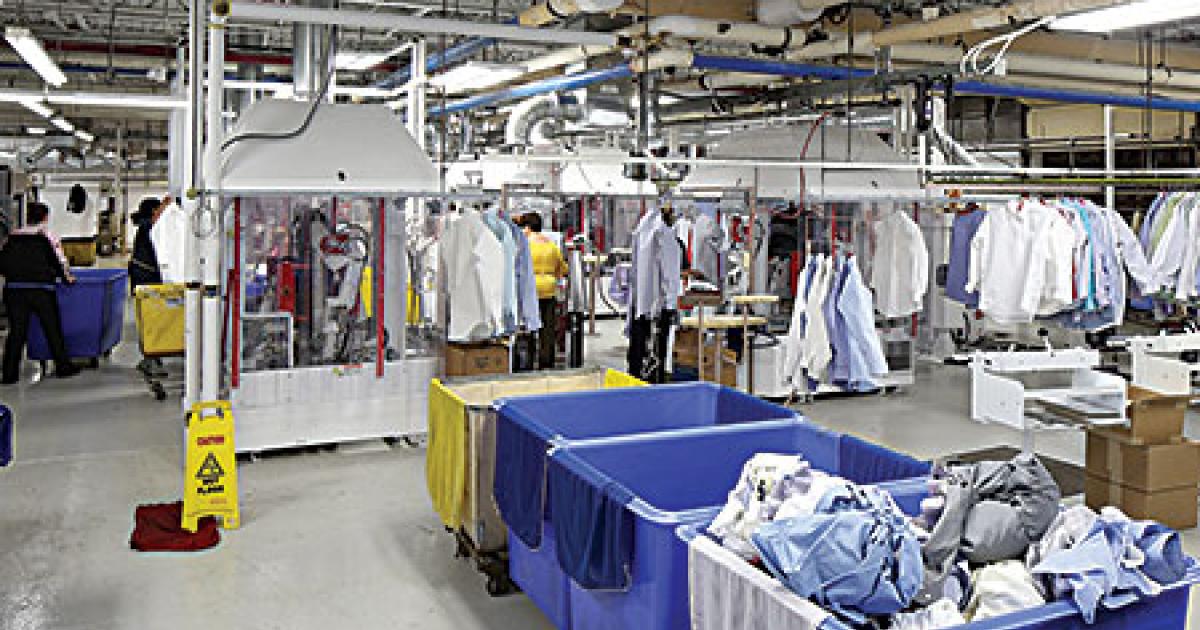 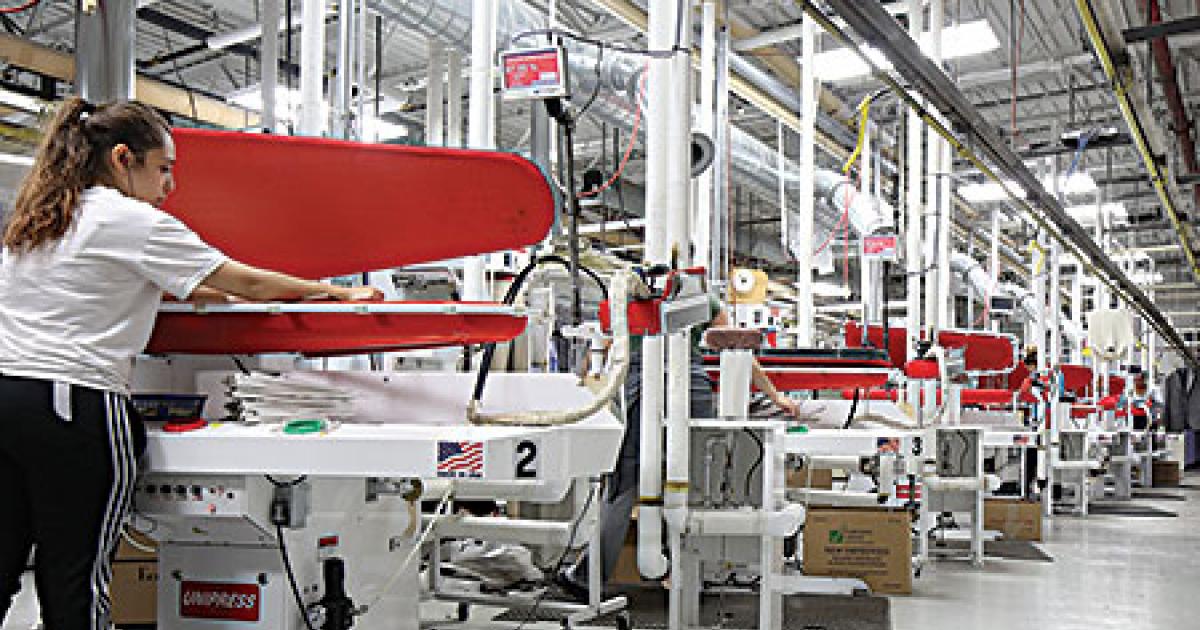 Eight Unipress pant-pressing stations have cut labor hours and boosted throughout and quality at Sheldon, the owners say. 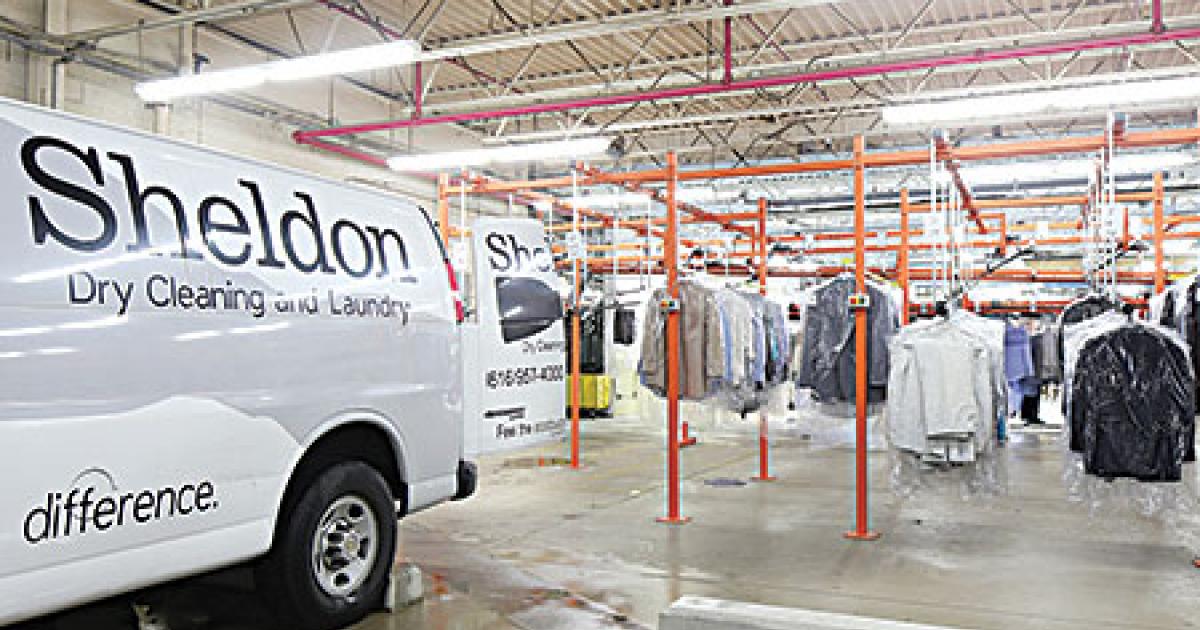 Sheldon Cleaners offers pickup and delivery service, or drop-off and pickup, via its 25 satellite locations.