KENTWOOD, Mich. — “It was something I could do,” says George Cares, of launching Sheldon Cleaners, in 1949. During its 66-year history, the company has reinvented itself multiple times; embraced and eliminated revenue streams; and overcome economic and industry-specific hurdles.

Today, George’s sons, Louie and Paul, lead the enterprise. The brothers relish the business’ “fun-factor.” While Sheldon Cleaners remains grounded in the mission and culture George created—one of quality and convenience—it’s morphed into a multi-faceted business encompassing several revenue streams and customer-focused services.

Today, the business umbrellas the 32,000-square-foot Sheldon Cleaners; 25 satellite locations that are situated in strip malls or on real estate owned by the Cares family; a 6,500-square-foot card-operated vended laundry (The Laundry Café); and a coffee and crêperie inside the laundry (Café Louis). Revenue flows from various income-generators, including dry cleaning, self-service laundry, fluff-n-fold, rental income, and food and coffee. All together, the enterprise employs 240 people throughout Grand Rapids, Holland and Kalamazoo, Mich.

George Cares, and his wife, Hope, have five children: Paul, Louie, Sandy, Linda and Martha. All of them have worked at Sheldon’s front counter over the years. While Paul and Louie took over leadership in 2010, Sandy served as the company’s writer and marketer for several years. Martha, an opera singer, sang the company jingles. Paul and Louis—who like to figure things out—hold patents on a number of inventions pertinent to the drycleaning industry. The Cares family has born, grown and sold a number of businesses in addition to Sheldon Cleaners, including a tuxedo rental business, travel agency and uniform retail store.

Over the years, Sheldon Cleaners evolved. George Cares launched the business in 1949 after studying architecture in college and serving in the Navy during World War II. As a child, he had worked in his father’s drycleaning business as a tailor and presser. Being an accomplished tailor, George made tailoring services a critical piece of Sheldon’s services for many years.

Not long after opening, the big thoroughfare where the business was located—Sheldon Boulevard—was transformed into a one-way street, according to a 1984 American Drycleaner story. This choked drop-off business, spurring George to look for another revenue generator. George and Hope hopped a train to Chicago.

“We went to Maxwell Street and bought a whole warehouse of used tuxedos,” says Hope, who was 19. George was 22. “On the way home, crates filled with tuxedos lined the train aisles. When we arrived home, I waited at the train station guarding the tuxedo crates until George got the truck and drove over to pick us up. The next day, we were in the tuxedo rental business.”

The tuxedos were a hit, but George continued to work to ensure Sheldon Cleaners’ success through aggressive and consistent marketing backed by a simple promise. He offered weekly specials on specific garment cleaning and insisted on superior quality and convenience. Sheldon Cleaners extended its hours, stayed open on Saturdays, and offered same-day service to customers throughout the week.

The “little guy” began to stress the competition. “Dad noticed other cleaners were not responsible for loose buttons, stains or tears,” says Paul. Of course, at Sheldon Cleaners, they fixed all of that. “Dad set the mood for Sheldon’s culture by making quality and convenience priority one.”

“Dad always wanted to do the impossible,” adds Louie. “Early on, I really believe he was the only cleaner in the country to offer same-day shirt service.”

It wasn’t long before George got on a roll buying up small, abandoned gas stations. His first satellite branch, established in 1965, was a renovated Texaco station. “A major talent of Dad’s was picking locations,” says Louie. “He bought little gas stations that were perfect for dry cleaning because customers could easily get in and out for drop-offs and pick-ups.” Ultimately, George converted 12 gas stations into successful satellite stores.

“I had already decided that with my first few branches, if I did well, I’d shoot for the moon,” the American Drycleaner article quotes George. “If not, I figured I’d settle back into my original plant and try to be happy as a small operator.”

All the while, George focused on quality. He demanded crystal-clear solvents, according to Paul and Louie. “Dad was known to pin a cotton ball to a garment and drop it off for dry cleaning at a competitor’s,” says Paul. “He’d do the same at Sheldon Cleaners. Then he’d compare the color of the cotton once the garments were processed. Ours were pure white. The others were gray because their solvents weren’t clear.”

By 1985, George’s high-volume drycleaning focus spurred him to back off of tailoring. “It was very difficult to train fitters and there were lots of good mom-and-pop tailor shops around,” says Paul. Still, a full-time tailor was always on hand at Sheldon Cleaners to mend customers’ loose buttons and tears.

Shortly thereafter, the tuxedo rental business was sold and the Cares family commenced building strip malls. “We did the tuxedos in order to survive early on,” says Louie. “But, by 1991, we realized that the tuxedo rental business took 80% of our effort and generated just 20% of our income.” Meanwhile, the newly developed strip malls began flowing retail rental revenue. Some of the strip malls were anchored by Sheldon satellite stores, making it even easier to rent available space within those malls. “We sold our tuxedo business to Dunhill Tuxedoes of Indiana,” says Louie. “They remain a tenant in some of our strip malls.”

George, now 90, officially retired about five years ago. Nonetheless, he stops into Sheldon several times a week. It looks a lot different today than it did in 1949.

Check back Tuesday for Part 2! 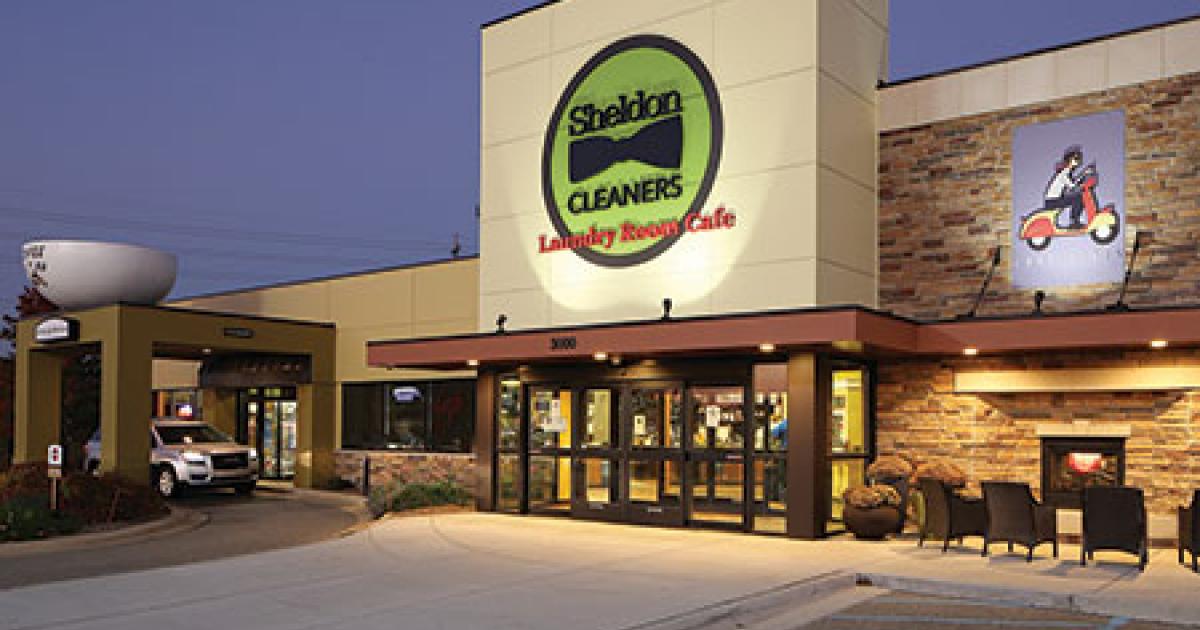 Sheldon Cleaners, The Laundry Room Café and Café Louie are family-owned businesses in Kentwood, Mich. The Cares family started Sheldon Cleaners in 1949 and opened the vended laundry less than a year ago. (Photos: Continental Girbau) 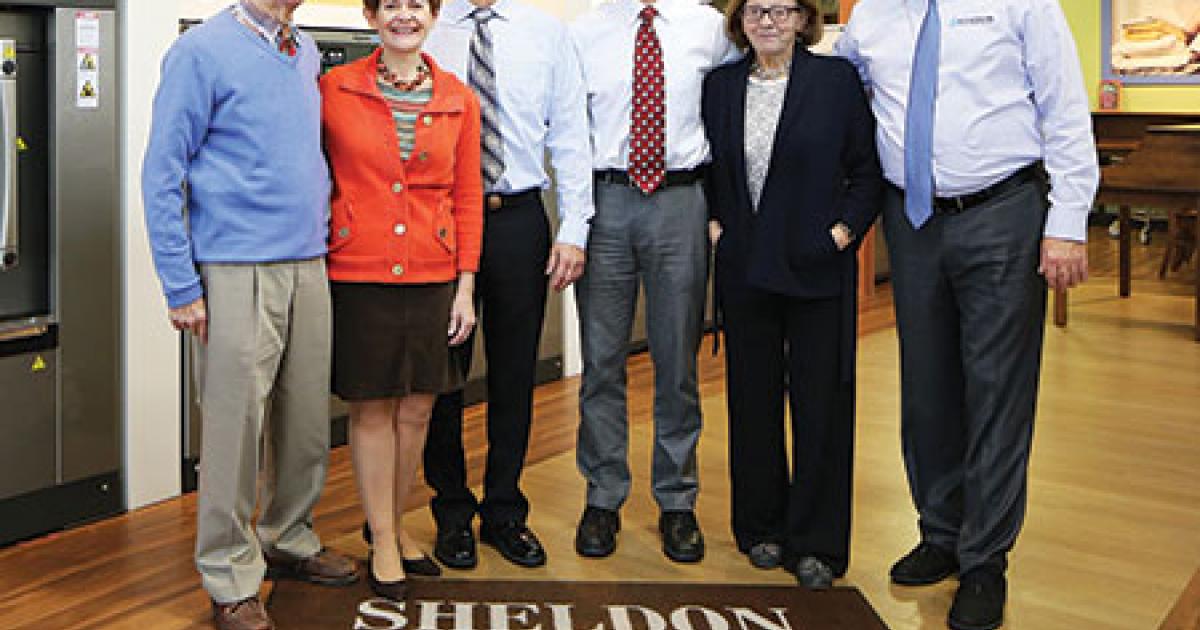