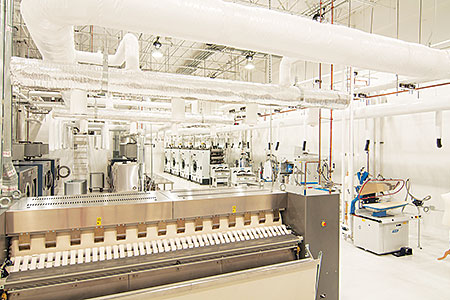 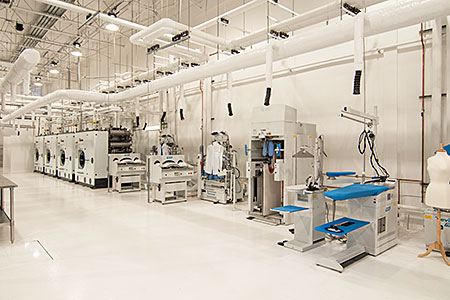 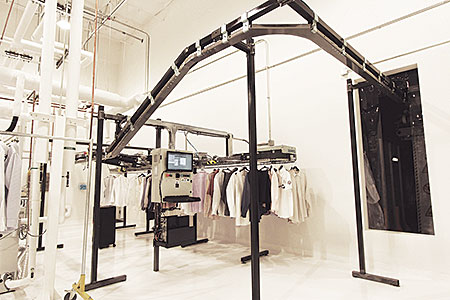 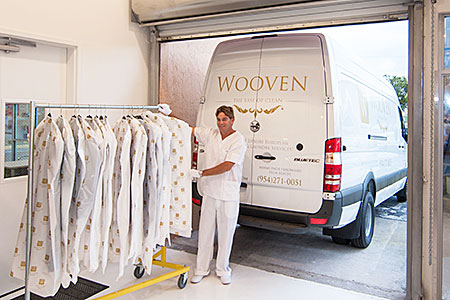 Sounds of the Industry

POMPANO BEACH, Fla. — Dissatisfied with the drycleaning service they had received since moving to the United States from Russia a few years earlier, Elena and Vladimir Samofalov decided that dry cleaning could be a good business opportunity for them. Leaving their careers in law and engineering, respectively, they struck out to build their own drycleaning and laundry business.

Using previous business connections, they traveled throughout Europe and visited that country’s leading drycleaning plants. Elena received drycleaning training in the States. They sought the opinions of consultants foreign and domestic, and started to develop a European-style vision for what is now Wooven, a network of three drop stores (two in Boca Raton, the third in Wellington) serviced by an off-site production plant.

It took them a year to find the right plant location to suit their needs. Construction began in September 2013, and the 8,000-square-foot plant was up and running by April 2014, Elena says. Construction cost was pegged at $1.2 million.

The idea was to build a full-cycle industrial drycleaning plant with a production capacity of 10 tons per day. It is fully equipped for dry cleaning; wet cleaning; laundry; bed linens; clothing and household items; leather, suede and furs; and alteration services.

Bob Aldrich, whose full-line distributorship Aldrich Clean-Tech Equipment is based in Massachusetts, oversaw the work of those contracted to build and install the Florida project. He first met the Samofalovs at a regional drycleaning conference in New England.

“I just stayed in contact with them, and one thing led to another,” he says. “They started sending me some plans and giving me an idea of what they were looking for. I made a trip down to take a look at the building they purchased. They told me … they wanted to build pretty much a one-of-a-kind, state-of-the-art drycleaning and laundry facility that would be cleaner than a hospital. And they achieved that.”

Wooven’s 20 employees work in daily-cleaned white uniforms, including white shoes, which are used inside the facility only. Wooven employs someone whose only job is to clean the facility eight hours a day, five days a week.

The production process is arranged from the back of the plant to the front, where items are packaged and sent out for delivery to retail locations and customers’ homes. The Samofalovs pushed Aldrich to position the equipment as tightly as possible and to keep the necessary piping to a minimum in the 125-foot-by-40-foot production area.

Most of the equipment is covered with special-order jackets, which do not normally come in white, says Vicki Soderlund, AIA, whose Boca Raton-based Soderlund Architecture + Design firm was project architect.

The office area is fully air-conditioned, and a spot-cooling system is in place in the production area.

Besides the aesthetic aspects of the plant, Wooven’s owners made their equipment selections for redundancy’s sake, Aldrich says. “In the power plant, they have two boilers with backup condensate pumps. They’ve got enough equipment, between the washers, drycleaning machines, presses, that if any one piece went down, they could still operate.”

Although it wasn’t in their original plans, the Samofalovs have been approached about franchising their business concept, and Elena says they hope to begin doing that soon.

American Drycleaner extends its congratulations to all of the winners of our 54th Annual Plant Design Awards! If your company will be building a new plant, or upgrading a facility, over the next year, be sure to document your progress and enter your construction or renovation project in the 55th Annual Plant Design Awards to be presented in early 2016. Watch American Drycleaner during the latter half of this year for entry information and deadlines. Contact Editorial Director Bruce Beggs ([email protected]) with any questions. We hope to see your plant in the running next year!