DELMAR, N.Y. — Two of the most essential elements for any business wanting to survive challenging economic times are building a team with a strong shared culture and the ability to pivot in your plans, going from what was expected to what is actually happening.

These were the main topics discussed at the third session of the 2020 Leadership Forum, sponsored by America's Best Cleaners last Wednesday. The free webinar — the third of six monthly programs put on by the organization — gathered five professionals from different sections of the fabricare field to discuss the leadership challenges presented by the pandemic.

The willingness of leadership to lead by example, rather than by orders, was the group's first topic.

"I'm glad we're not doing this (forum) tomorrow because I have to do a route," says Michael Harris, owner of Oceanside Cleaners in Jacksonville, Florida. "I've been on the spotting board, routes and counter, and I lead by doing. After 30 years, if you don't have high morals and ethics, the employees will see right through you. I'm consistent, and I expect the same out of our employees."

Ryan Luetzow, owner of plastic poly film and bag manufacturer Luetzow Industries, agrees with Harris. "I'm a leader where no job is beneath me," he says. "If I see my staff needing help, I will immediately step in, and, thankfully, they did the same for me when my father and uncles retired a handful of years ago. They stepped up in a huge way, and that was a godsend."

Building a team, rather than a collection of employees, may take more attention initially, but there's no substitute for people who have your back when times get difficult.

"I was like everyone else, incredibly concerned about where things were going," says Luetzow, "and I know that they have similar worries. So, as soon as that dawned on me, I let them know, 'Hey, you guys, your jobs are secure. They're safe. We're not cutting your money. We're not cutting your hours. But we are going to expect you to adapt with the business. We've got to become more nimble.' We asked them to learn the tasks of their peers, so if, God forbid, one of them did go out with COVID, someone else could step in and keep the company going."

Wayne Wudyka, CEO of The Huntington Group, has been in the business long enough to know that economic challenges are inevitable and that keeping an eye on long-term goals can help smooth out the ride. "This is my fourth big downturn," he says. "The first was in 1992, the savings and loan crisis, the year I got in the business. Then came 9/11, the housing crisis in 2008 and now the pandemic. We've stayed steady in following our plans and staying very focused on our budgets, projections and managing to an end."

Maintaining a constant presence with his team is key to Wudyka's leadership style. "I stop in to every one of my plants every day. I know every employee's name, and we have 200 employees," he says. "I make a point of staying connected to the day-to-day aspects of the business." Wudyka also maintains strong connections to franchise partners, making a point to regularly meet with each of them. "We've upped our communications because at the operating level, it's really about staying connected with your team."

When one avenue of income becomes blocked, as is the case when dealing with the fallout from COVID, diversification can mean the difference between success and failure. "The keyword here is 'pivot,'" says Habib Veera, president of Door to Door Valet Cleaners in Los Angeles. "We weren't quite prepared for a pandemic, but we had started to diversify within the industry. One of the factors that led to that was the California smoking ban in public places. If you're around smoke, you're going to need things dry cleaned. That volume fell off, and it was pretty significant. We started to pivot at that point, so we were in a better position than most."

Veera said that, while his company has other services available, the trick is to let customers know about them. "We had to do a better job of marketing them," he says of services such as household and home furnishing cleaning. "We didn't necessarily take on new things, but we had to get the word out."

Tim Maxwell, president of GreenEarth Cleaning, said his company had to do a massive shift from what they had planned into what they had to do. On March 13, two days before GreenEarth was to roll out a new type of filter that would limit the amount of microplastic entering the oceans, the national emergency was declared. "Our SeaClear initiative was temporarily put on hold, and we pivoted toward the pandemic issues associated with the cleaning process," Maxwell says. "We did more than 25,000 direct reach outs to our affiliates over the course of six months."

One of the new tasks GreenEarth took on was working with Stanford Medical, who reached out to the company regarding cleaning n95 medical masks. Because of the fitting needed for this type of PPE, getting them wet was not an option because they would change shape and no longer fit the face of the medical professional. "To all of a sudden to be in testing with a laboratory dealing with COVID-19," Maxwell says, "working through the impact of heat and various cleaning process steps that would deactivate the virus six times beyond what heat alone would do was fascinating to me. I was blown away with how impactful our team was."

All of the panelists agreed that the next few weeks and months would be difficult and that some businesses will not survive to see the end of the pandemic. The ones that are most likely to make it, Harris says, are the ones who are willing to adapt to the new reality of the present and invest in their staff.

"The marginal cleaners are going to struggle," he says. "You've got to work on your culture. We started a steering committee a few months ago that has an employee from each department, and it's going to steer us into the future.

"There's no shortcut to culture," Harris says. "I see it like raising kids. You've got to spend time with it, and you have to spend money. Without those two, you're just not going to get the culture you want."

"The biggest lesson I've learned is how fast things can change," says Luetzow, "but change, as every business owner knows, is not necessarily a bad thing — if you embrace it, can roll with it and make the best out of it. Some of the best things actually come with change during wartime. While that is tragic, that's when we sometimes get the most advances in science, technology and other things of that nature. Granted, we're not in war right now — but maybe we are for our survival. There are parallels that can be drawn, shaking things up and deviating from 'the way we've always done things' business model."

To watch replays of previous sessions of the Leadership Forum, visit https://americasbestcleaners.com/leadershipforum. You can also register for the next event, which will take place at 4 p.m. EST on Dec. 9. 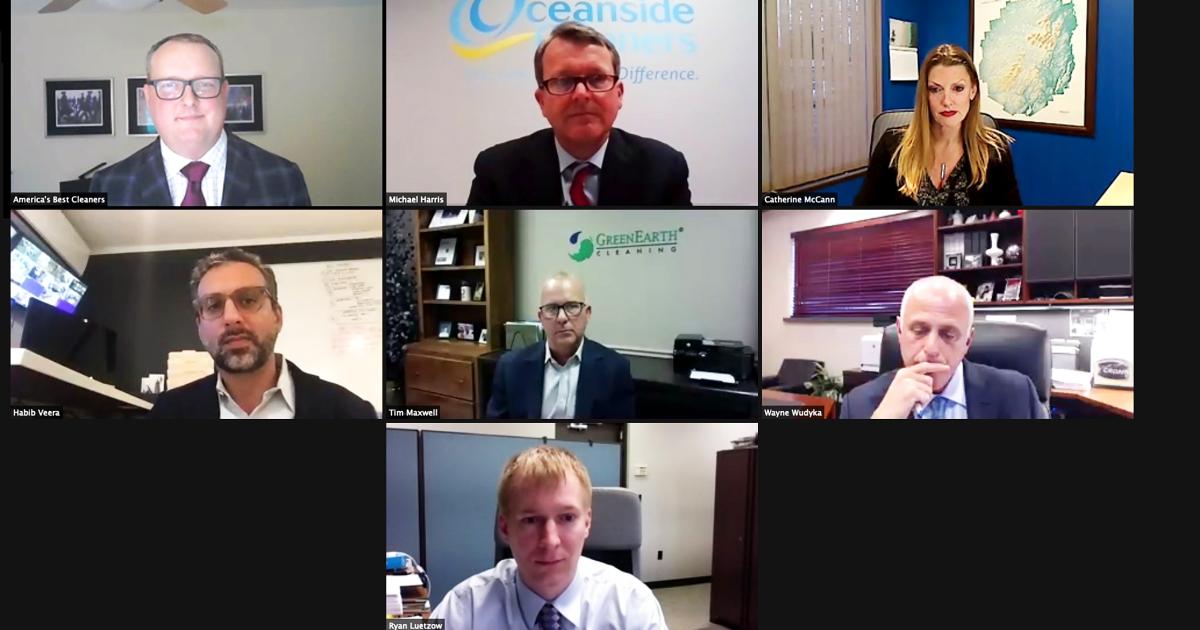 Have a question or comment? E-mail our editor Dave Davis at d[email protected] .