CHICAGO — Dry cleaners who have been in business for any measurable length of time know that it’s not a matter of if mistakes happen but a question of when. Broken buttons, faded dyes, rips, unremoved stains … the list goes on. Sometimes the error occurs at the plant, and sometimes before the garment ever reaches the cleaner (“No, I didn’t already try to get that stain out” is a customer comment often heard over the front counter).

So, knowing that it’s only a matter of time before a cleaner’s staff will have to give a customer some bad news, having a plan in place for such occasions can spell the difference between an argument (or worse) and a surprisingly positive encounter.

The best way to deal with claims, of course, is to avoid the mistake in the first place.

“The minute a customer walks in the door with their armful of clothes, the counter staff should ask if there’s anything that needs special attention,” says Trudy Adams, principal of Blue Egg Consulting. This can start a conversation that can yield valuable information about spots or other issues that might have been missed.

Brian Butler, president of Columbus, Ohio-based Dublin Cleaners, says that the more valuable an item is, the more critical it is to set expectations.

“Someone might come in with a $900 bedspread that has some unknown stains that have been there for a long time,” he says. “We’re not so much worried about whether we can get those spots off; we’re more worried about how long they’ve been sitting on that fabric and affecting that dye. When we do flush those out, will there be some discoloration?

“We’ve got to talk about it upfront, and we need the customer to be comfortable with it ahead of time. But, when we’re dealing with Brooks Brothers shirts that come in hundreds of times a day, there just isn’t time to have those conversations. So, you play the numbers that not too many people are going to be too upset about it, and, if one does, what do we do to make it right?”

While setting rules and expectations is a good starting point, trying to get too “legalistic” can quickly backfire when it comes to maintaining a customer relationship.

“You might have on the back of your receipt that you’re liable for only 10 times the cleaning charge,” Butler says. “If you charge $3.50 for a shirt, you’re only going to pay out $35. But, if a customer has a Tom James shirt, that $35 is going to be a slap in the face. If he spends $50 a week in your store, it’s best to not flip that receipt over and say, ‘That’s how it’s going to go.’”

Some dry cleaners have release forms for the customer to sign when it comes to a challenging piece, but Adams believes cleaners should understand the document’s true value.

“Releases are about as good as the paper they’re written on,” she says, “but what they are good for is to just have the customer acknowledge the risks that are involved. The cleaner can say, ‘We’re going to go ahead and do this for you, but there is a risk.’ So, should something happen, the customer was informed.”

Power to the Staff

Problems are going to crop up from time to time. Knowing this, Adams believes there’s no reason for a counterperson to be unprepared.

“Management needs to sit down together and write out how they would like their staff to respond,” she says, “so collectively, as a whole company, everybody should know what they should say for common complaints. It could be a broken button, for instance, or a lost or damaged item — any of the most common things. Often, the staff is just not trained as to how to respond, and they’re not confident. I’m not saying they have to say the script verbatim; I’m saying to just have them understand what it is that they’re supposed to say.”

Even if your customer service representative (CSR) makes too big of a concession, Blake says, let them know you have their back.

“We’ve told our customer service staff that we don’t want someone walking out of the store upset in a way that could lead to a bad review and relationship if it’s $100 or less,” Butler says. “I remind our customer service staff that, if they try too hard to defend us, they’ll end up hurting us. With the $100 limit, there no way that’s going to hurt the company, but if they don’t offer it to the customer, that might irreparably damage our business.”

However, just because they are empowered doesn’t mean that dry cleaners should allow their staff to be abused.

“If you’ve got someone yelling in your shop, being completely unreasonable,” Blake says, “the counter staff should be always feel completely comfortable saying, ‘I understand where you’re coming from, and I understand your disappointment and your anger. Let me have somebody call you back right away, who can handle the situation better than I can.’ And then, give the customer a time frame where they’ll receive that call. It’s a win-win situation for everyone because now the right person will be dealing with the issue, and it’ll be in a much quieter setting.”

This approach also helps to soothe the situation because the customer’s problem might not be with the dry cleaner at all.

“You’ve got to understand that your customers — all of us — are dealing with a lot,” Blake says. “Everyone’s got their own story to tell. The customer might be in an atrocious mood, and they may be venting at you. You might be the one taking the brunt of it. It’s not your fault. It’s not the cleaner’s fault. The minute you get angry, the situation escalates.”

Come back Tuesday for Part 2 of this series, where we’ll examine the best tool dry cleaners have to defuse potential arguments about customer claims. 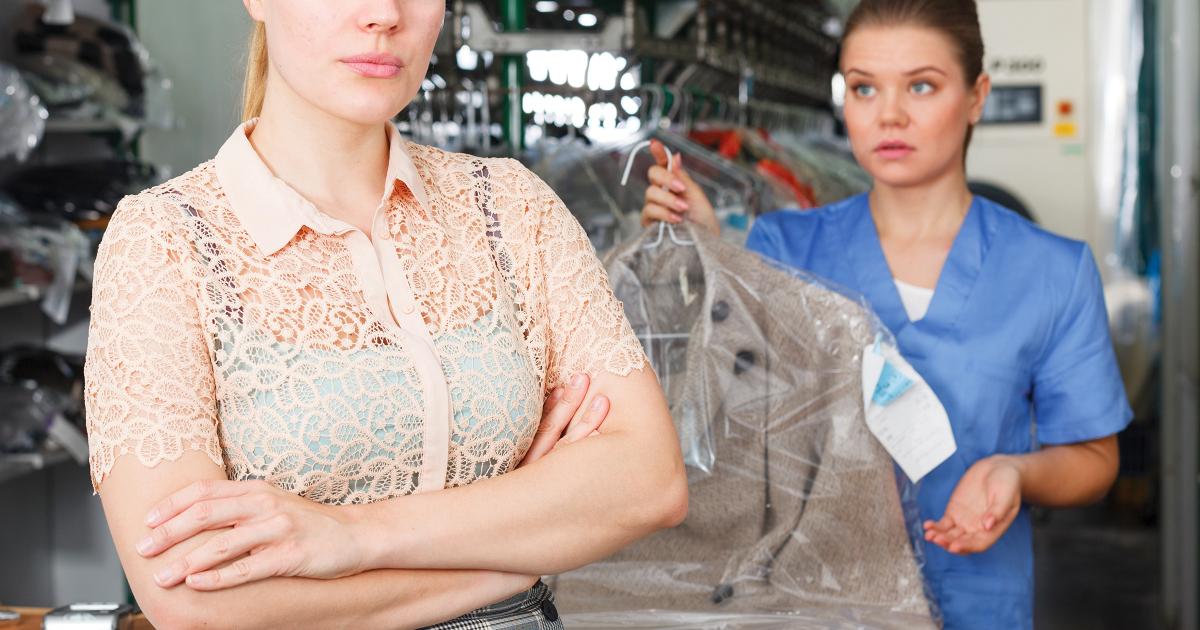