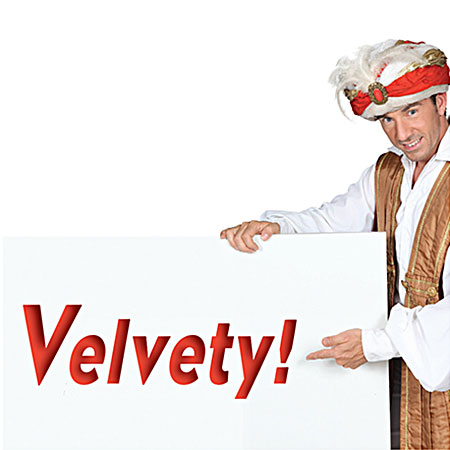 A gain beyond the ordinary

CHICAGO — In our first two Yarns Spun Here specials, we examined the terms “carding” and “combing” in textiles.

Now we turn our attention to another industry term: velvet.

Velvet — if you look it up on Wikipedia (and why shouldn’t you?) — is a type of woven, tufted fabric in which the cut threads are evenly distributed, with a short dense pile (that means raised surface) giving it a distinctive feel, the website says.

Pile fabrics consist of a base weave into which a third set of yarns is introduced. This from author Norman Oehlke’s Complete Spotting Guide: “The back is often composed of one fiber and the pile of another. In a method called the ‘V’ weave, the pile yarn passes through the fabric, around one yarn of the base weave and back again.”

He adds: “In another method, the ‘W’ type, the pile yarn passes under one or more yarns, over the next, under again, and up. The latter weave tends to lock the pile more firmly in place than the ‘V’ weave.”

An entry from the Encyclopedia Britannica Eleventh Edition (1911) notes: “The peculiar properties of velvet, the splendid yet softened depth of dye-color it exhibited, at once marked it out as a fit material for ecclesiastical vestments, royal and state robes, and sumptuous hangings; and the most magnificent textures of medieval times were Italian velvets.”

There are other usages of the word velvet. This from the Merriam-Webster dictionary: “It is the winnings of a player in a gambling game. A profit or gain beyond ordinary expectation.”

This definition relates to fabricare, too, in a sense.

For if one excels in the drycleaning business — for example, the cleaning of fine clothing such as velvet — then one’s profits are likely going to be velvety!