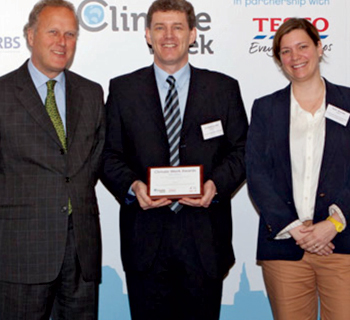 KANSAS CITY — Britain’s first Climate Week Awards named Xeros Ltd. the “Best Technological Breakthrough” last week. Introduced at Clean 2009 in partnership with GreenEarth Cleaning, the laundry technology saves water by introducing nylon polymer beads into wash cycles.
“We are excited, but not surprised, to see Xeros being recognized for the remarkable potential of this revolutionary technology,” says Tim Maxwell, GreenEarth president. “Much has been accomplished since we first introduced Xeros at the last Clean Show, and we look forward to sharing news about [its] progress at this year’s Clean Show.”
Xeros replaces most of the fresh water used in conventional washing with the reusable beads, making only a small amount of water necessary to help them loosen and lift stains. Dirt and stains are locked inside the bead, the company says, preventing redeposition. Independent analysis says that Xeros cleans as well as normal washers, while its carbon footprint is estimated to be 20% lower.
The Climate Week Awards were judged by an international panel of experts, including Lord Nicholas Stern, author of the Stern Report; Mary Robinson, former Irish president; David de Rothschild, eco-adventurer; Ian McEwan, best-selling author; and Tim Smit, founder of the Eden project.
Xeros also recently came in second in Time magazine’s “2010 Best Inventions,” among other honors. GreenEarth affiliates are now testing the process in the U.K., and U.S. testing sites will begin using Xeros systems later this year, GreenEarth says.