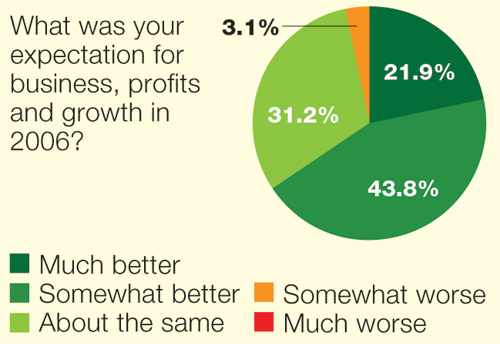 One year ago, almost two-thirds of drycleaners responding to a Wire survey said they expected business to improve in 2006. When asked how this year compared to 2005 in terms of business, profits and growth, 54.6% reported that results did improve, with 15.2% of drycleaners answering “Much better” and 39.4% "Somewhat better;” 18.2% said “About the same.” Another 18.2% said business was “Somewhat worse” last year, and 9.1% said “Much worse.”
While 2006 results compared favorably to 2005 in most cases, the survey says, operator optimism seems to be flagging: Only about half (51.5%) of last month's respondents said they expect business, profits and growth to improve in 2007, and one in five (21.3%) expects results to deteriorate.