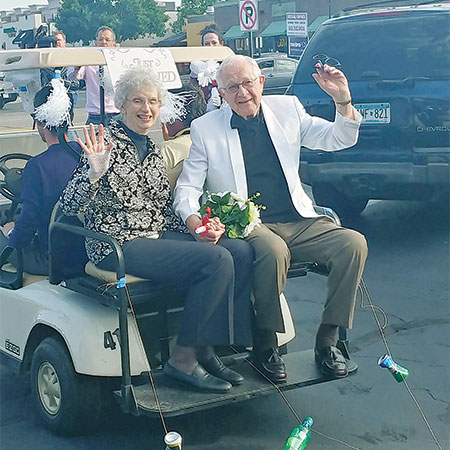 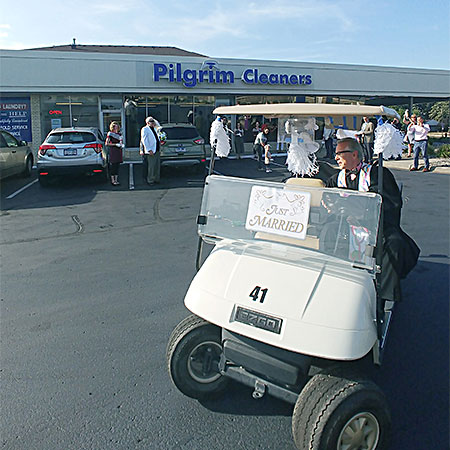 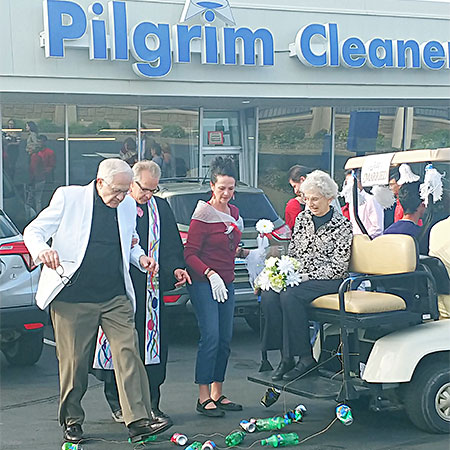 ROBBINSDALE, Minn. — Pilgrim Dry Cleaners recently hosted a couple’s 60th anniversary renewal of their wedding vows. The joyous surprise event for the couple was held in the cleaners parking lot.

“Near the end of August a family reached out to our business to ask if we would let them surprise their parents with a small ceremony to commemorate their 60th year of marriage in the parking lot of our Robbinsdale Pilgrim Dry Cleaners location,” relates Keona Tranby, director of marketing for Pilgrim Dry Cleaners. She explains that the location was the site of where their former church once stood but had long ago been moved.

Sixty years ago the couple, Jim and Diane Cook, were married; on August 30, 1958, Pilgrim writes. The president at the time was Dwight D. Eisenhower. The world launched the first artificial satellite and NASA was formed. The Beatles (called the Quarrymen at this time) also recorded their first song, a cover of Buddy Holly’s That’ll Be the Day.

As a long-standing business in the Minneapolis community, Tranby explains, “we love hearing stories of how our communities have changed and grown in the 75 years our business has been around. We were so happy to be able to be a part of this family’s story.”

There’s more: The officiant for the couple’s big event drove a golf cart to the ceremony too.

“He brought it around as a surprise before the ceremony started,” Tranby tells. “They apparently said that they wanted one if they ever renewed their vows. They also rode on it after the ceremony to the restaurant near our store for a celebration afterward.”

Any memorable quotes from the 60-years-married couple?

Tranby says: “One of the TV stations asked them what kept them together for so many years and he turned to her and said, ‘you would have to ask her what kept her with me.’ They both smiled and said humor and friendship.”

Tranby points out that the couple wore outfits, “similar to what they wore on their wedding day.” He wore thick-rimmed black glasses and a white blazer; she wore a vail.

Was your store operating during the event? And did you clean Jim’s white blazer?

“Yes we were open,” Tranby says, “and customers were intrigued and taking photos. The couple had violinists playing their wedding songs such as O Holy Night and I think they got a kick out of that.

“We did not clean Jim's white blazer, but one of the daughters of the couple brought in a few items to be dry-cleaned before the event!

“She received the reminder slip and laughed because she said she probably won’t need a reminder that she was at the dry cleaner this time,” Tranby adds.

The cleaners invited local media to come cover the surprise event and asked them to not give away the surprise for the anniversary couple. They didn’t.

“There is one thing I would like to add as owner,” Engler relates. “We are a three-generation family business. My father Don Rosen, our patriarch, had who passed away just about three years ago started with Pilgrim Cleaners 78 years ago. His legacy was all about family.”

Engler says with emotion, “He treated everyone like family! He was married for 73 years to the love of his life. You can tell that this couple represented the same love of family! He was watching down on this love story for sure.”

Living in Robbinsdale at the time, the cleaner explains, “Jim and Diane met at the United Church of Christ. They were both known for being tall, so they were introduced due to this common trait. Jim was soon to head off to Korean War duties in the Navy, so the two kept in touch through letters while he was away,” it notes.

“When he returned from the Navy,” the story continues, “they started to date officially and were later married at the church. Diane was 19 and Jim was 23. Jim became a teacher and then a Presbyterian minister, while Diane was a gifted supporter of his careers and homemaker for their family of three children.”

“Though they have lived in several cities since their marriage, Jim and Diane are currently living close to their roots in New Hope, where they are enjoying retirement,” Pilgrim concludes.