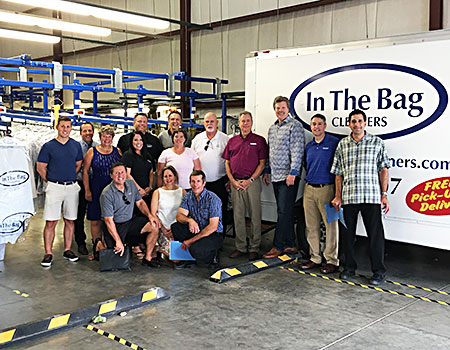 WICHITA, Kan. — The Tuchman Advisory Group (T.A.G.), formerly known as Tuchman Training Systems, reports having had a successful meeting hosted by Dave Coyle of In The Bag Cleaners here in June.

Ellen Tuchman Rothmann, president of T.A.G., announced at the meeting the new name of the group. “We will continue our outstanding work and provide leadership in our industry,” she says.

“T.A.G. membership constitutes an industry-leading group,” says Rothmann. “We will continue to learn from each other as we work together to develop new systems and approaches that will strengthen our individual companies.”

It has been 30 years since her father, Sid Tuchman, created his cost groups that have made such a difference in the lives of many in the drycleaning industry, she notes.

During the June meeting, T.A.G. members toured In The Bag’s central production facility and two retail locations. Frank Dubasik, director of U.S. operations for Metalprogetti, was on hand to answer any questions about his company’s recently installed equipment. Following the tour, T.A.G. members critiqued In The Bag operations.

Guest speakers at the meeting included Walt Smith, executive vice president and co-founder of Indy Hanger, who discussed his company; and John Rothmann, KGO-AM810 talk show host, who provided political analysis of the 2016 Presidential election. Members then gathered at the Coyle home for dinner.