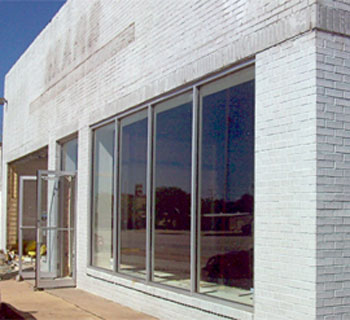 Operators returning to the industry sawed off an abandoned building to create a dream plant, taking Plant Design honors.
GIDDINGS, Texas — Siena Dry Cleaners in Giddings, Texas, isn’t the first drycleaning plant operators Michael and Amy Przyborski have run, but it may be the best. Re-entering the business after a two-year sabbatical, the couple knew what they wanted in a plant and launched the complete reconstruction of a 1920s building to get it, winning Special Honors in American Drycleaner’s 50th Annual Plant Design Awards.
They opened their first plant—a new build in Seeley, Texas—on Sept. 10, 2001. And in spite of the obvious challenges, the plant did well for more than seven years before the couple sold it to a nearby competitor. They spent the next two years “enjoying life, for once,” says Michael, “taking the vacations we never took.” But drycleaning is “hard to get away from. Even people who sell out wind up on the sales side, or the equipment side, or the supply side. It gets into your blood somehow.”
Deciding to return to the business and preferring to own, they bought a plot off the main drag in Giddings, a small town in the middle of Texas’ booming Golden Triangle. Before they could break ground, however, a better building became available. Constructed as a Ford dealer in 1929, it had served as a Sears Hardware store until the turn of the century before being abandoned.
Next to a busy Brookshire Bros. supermarket and on the main highway through town, the building had the “Three Ls,” Przyborski says. “We get a lot of people who commute.” But location can have its drawbacks, too: The road had expanded from two to five lanes over the years, and now butted up against the building. “When you backed out of the plant, you were in the highway,” he says.
The solution? Cut the building back to make room for a parking area. “They basically sawed the front of the building off with a giant chainsaw,” Przyborski says. “We took 38 feet off the front and ended up with 4,500 sq. ft.” He then acquired the lot next door for a drive-thru; the grocery granted a right-of-way from its lot for additional access. “It really cleaned up the whole area here,” he says. “The grocery was nice, and there was this eyesore on the corner.”
The building is constructed of masonry block, which is cast with air chambers inside to keep heat at bay. With a new white roof and insulated press heads, the production floor stays cool even in the Texas heat. “It’s unbelievable,” Przyborski says. “I don’t even have to exhaust the heat out of here—that’s how much cooler it is.”
The Przyborskis designed the layout and equipped it with the help of Pravin Parmar and installation contractors from longtime supplier Gulf States Laundry Machinery. “Everything we learned from the last place, we put in this one,” Przyborski says. “Laundry is on one side; drycleaning on the other. The chiller is close to the drycleaning machine, and the steam equipment is close to the windows. Big washers go on an above-ground trough made of concrete.”
Siena runs hydrocarbon solvent in Union machinery. Pressing is performed on Unipress equipment, including a Versaform III, which “has saved huge amounts of labor” by eliminating the need for touchups, even on polos. “Put them on and do your thing, and you don’t have to do anything else,” he says. The plant’s Unimac washers are programmed to run loads just before the plant’s small production staff arrives for the day.
For employees, the new plant features an air-conditioned breakroom. “The ladies never had a breakroom before,” Przyborski says. “It helps them to get away for an hour, to relax and be comfortable. Whatever we can do to make their lives easier, we should do.”
While the project was massive in scope, everything went smoothly. With the city, contractors and neighboring businesses eager to help, the plant’s buildout took just four months from purchase to completion. “The contractors were excellent,” Przyborski says. “It was well thought-out before we signed the papers.”
An attractive flagstone frontage connects the plant to the Texas hills, and about 80% of customers take advantage of the landscaped drive-thru for dropoff. Siena is doing excellent business, and while customers have urged him to put a drop store in nearby Bastrop, Przyborski says that “the sky’s the limit” at the Giddings plant.
“There’s no reason to put a drop store in,” he says. “I believe that if you do quality at your counter, you can reap great benefits. It’s rewarding to see the finished product. You have to re-educate customers, since they’re used to such terrible product. It’s not that hard to do things right.”