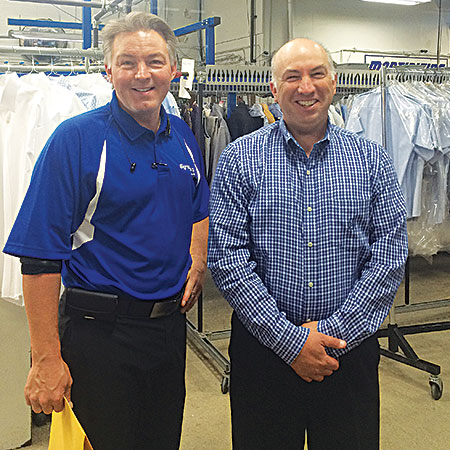 CHICAGO — “So this boiler goes into a bar …”

Describe the back-of-the-house workhorse of your drycleaning plant at your next cocktail party.

You love ’em, sure. We get that. In the drycleaning business, they are the heart of your plant’s operation.

“It seems like there are more and more boiler issues than ever,” says Brian Cass, who, along with brother Dave Cass, co-owns Martinizing Metro Milwaukee, a second-generation company that has been in the drycleaning industry 50 years.

“We just had one of our 50-horsepower boilers go down permanently and the second was close behind,” Brian Cass relates. “They were both about 8 years old. We replaced them with a 125-horsepower boiler.”

The brothers take their family business personally, and every cost is critical, including, and especially, the big ones like replacing a boiler. It’s likely the same with any drycleaning business owner.

“We just finished installing our new boiler. Additionally, we have had two other cleaners reach out to us recently saying their boilers had problems,” Cass says.

“I don’t know if it is the conditions some of these boilers are exposed to, or just less care being taken with them by us cleaners but they don’t seem to last as long. When we were all package plants, each store had a 10- to 15-horsepower horizontal boiler. Other than replacing tubes sometimes, they seemed to last forever.”

The brothers’ boiler challenges fell into two basic areas, according to Cass: traps that had stopped working, and the feed tank’s float valve.

“We recently began using an outside firm that provides trap testing. We used several methods ourselves and found six or eight bad traps. Then we called this outside testing company in and they found 20 more,” he says.

In Wisconsin, the state will provide free trap testing once a year, according to Cass, but then “charge a plant like ours with 100 or more traps, about $400 to come again, which I plan on doing as soon as we get the last couple of traps replaced.”

The State of Wisconsin also provides money toward buying the traps, so there really wasn’t any reason for the brothers to let it get as bad as it did, he admits.

“We have neglected our feed tank and float valve, that is part of it. In doing so, when that valve gets stuck and the water runs out, we essentially pour money down the drain in the form of wasted labor while we wait to build up pressure again in our boilers.

“We have a new feedwater system and hopefully that addresses our second issue.”

AS THE INDUSTRY CHANGES...

For the last 31 years, Michael Leeming has been national sales and marketing manager for Los Angeles-based Parker Boiler Co. The company founded in 1946 manufactures industrial and commercial steam boilers from 1.5 horsepower to 150 horsepower.

According to Leeming, there are ways to improve on efficiency, not only testing steam traps more often for proper operation, but adding items to existing boilers such as economizers.

They “capture the waste heat on boiler flue and either pre-heat the makeup water to the boiler or supplement the laundry water needed,” he notes.

“This is free energy, not like a unit that cools condensate, which you then also have to use fuel to put that energy back into feedwater.”

In a drycleaning industry that is changing, boilers must change, too.

“The trend now is more drop stations, and larger production plants,” Leeming says. “The landlords don’t like a plant on their strip mall locations because of environmental concerns with any solvent, so a nice industrial property that the dry cleaner owns has been a good solution for them.”

He further indicates that more people are wearing their dry-cleaned clothes more than once, dressing down, or “buying clothing that do not require dry cleaning, so there is not as much of a market as there was 20 years ago.”

To keep up with the changing fabricare world we live in, two words affect drycleaning plants. They are “efficiencies” and “advancements.” And boilers are in their sights.