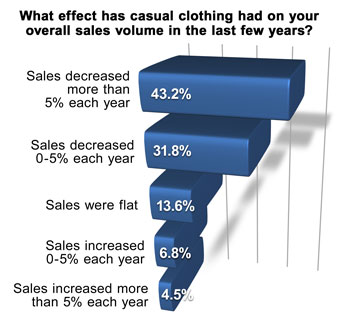 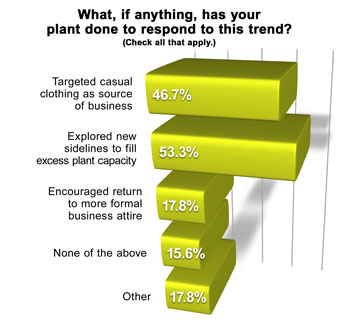 CHICAGO — Most dry cleaners rue the trend that has seen many dress codes shift to business casual, and more than three-quarters of respondents (76.1%) to this month’s AmericanDrycleaner.com Wire survey say the ongoing movement toward casual clothing in the workplace has had a major impact on the industry.

Approximately 22% say the business casual dress code has had a “minor impact,” and 2.2% say it has had no impact.

What impact has casual clothing had on overall drycleaning sales volume in the last few years? Roughly 43% say their sales have decreased substantially (more than 5%) each year, and 31.8% say theirs has decreased slowly (0-5%).

So, what if anything, has your plant done to respond to this trend? Among Wire survey respondents, 53.3% have explored new sidelines to fill excess plant capacity and 46.7% have targeted casual clothing as a source of business.

Roughly 18% have encouraged a return to more formal business attire, and a similar share of respondents have tried other things, including increasing routes, adding hotel uniform and valet work, and targeting a higher-income clientele.

Nearly 16% have done none of the above.

This topic generated a lot of comments from the cleaners who responded to the survey. Here is a selection:

Subscribers to Wire e-mails—distributed twice weekly—are invited to take the industry survey anonymously online each month. All dry cleaners are encouraged to participate, as a greater number of responses will help to better define operator opinions and industry trends.

Actually,I have noticed this year that we have more Men's suits than we have

had.Also,many silk shirts for men,and many nice dresses and blouses which MUST

be Dry Cleaned.Nice to see.