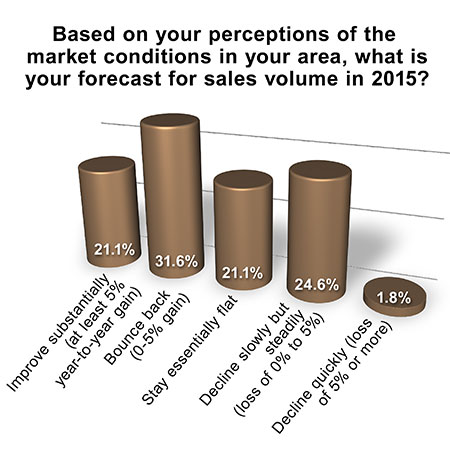 CHICAGO — Nearly three-quarters of respondents to this month’s American Drycleaner Your Views survey believe their dry cleaner’s sales volume will end the year as high or higher than their 2014 total, results show.

Approximately 21% of respondents say their 2015 volume will “improve substantially, with at least [a] 5% year-over-year gain.” Roughly 32% say theirs will “bounce back a little, with [a] gain of 0% to 5%.” Another 21% forecast their volume will “stay essentially flat.”

Among those who believe this year’s sales volume will have declined when compared to 2014 numbers, 24.6% peg a slow but steady decline at between 0% and 5%; just 1.8% say they’re expecting a sales-volume decline of 5% or more.

Increased consumer spending and offering high-quality cleaning are a couple of the reasons behind the improved sales figures being reported, according to respondents:

Other respondents pointed to lower piece counts, too much competition and a disinterest in dry cleaning among the general populace for their lackluster results:

What will you do boost sales in 2016? Among respondents, it will involve pushing for higher quality, increasing marketing efforts, establishing routes, and, according to one, “spotlighting the difference between processing and pampering.”

One cleaner in particular isn’t planning any new sales initatives: “You can’t sell ice cubes to Eskimos, and you can’t sell dry cleaning to people who don’t want to dry-clean.”

While American Drycleaner’s Your Views survey presents a snapshot of the trade audience’s viewpoints, it should not be considered scientific. Subscribers to American Drycleaner e-mails are invited each month to participate in a brief industry survey they can complete anonymously. Due to rounding, percentages may not add up to 100%.

Jeff Jordan of Fabritec International shares ways he’s found to form a team atmosphere in a business. We discuss why it’s important in a drycleaning company, the role of management in fostering this feeling in a plant, and how to avoid common morale killers.