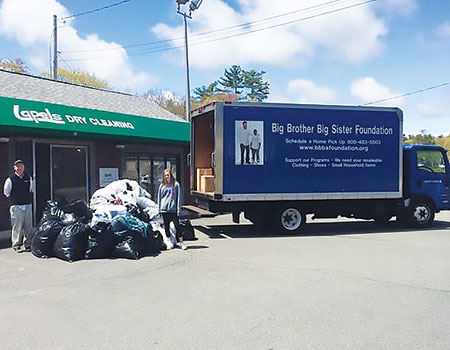 She had decided to use the drive for her community service work for school, just as her older brother Josh did the year before.

In the spring, the high school freshman began getting the word out to family, friends, and acquaintances. Donations were either dropped off at her house or, more often than not, she picked up items directly from donor households, the firm relates.

Her efforts added to the franchise’s Cohasset location total, which topped out at 2,990 pounds of clothing collected, the most of any of the company’s participating stores.

“I’m so happy we were able to get that many donations but what was really cool was how supportive friends and family were in helping this cause,” says Dubois. “In a way, it almost made me forget that I was trying to beat Josh. Almost.”

She wanted to collect more clothes for the company’s clothing drive to benefit BBBS than Josh’s 1,398 pounds in 2016.

“There really are no losers when you have a rivalry of this nature,” says Kevin Dubois, father to Brooke and Josh and CEO of the organization. “Of course, having seen what Josh did last year helped her get a bit of a head start.”

The grand total for all participating stores reach 16,093 pounds of clothes collected — the highest in the 14 years the company has conducted the drive, it notes.

All the clothing donated will be sold through a variety of channels — consignment shops, flea markets and online portals — in those respective states, the company relates. The sales of those items will go to fund mentoring programs for young girls and boys in those states.

“Obviously, we’re proud of both our children for what they do in and out of the classroom. But this was a special effort for a very worthy cause,” says Erica Dubois, Brooke and Josh’s mother.