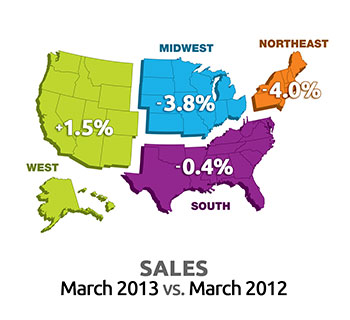 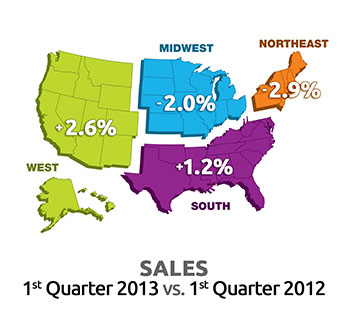 CHICAGO — March proved to be a challenging month for dry cleaners across the nation, as the West was the only region to post sales gains, up 1.5% compared to March 2012, according to results from the latest AmericanDrycleaner.com StatShot survey.

Despite this, market conditions in the West remain mixed, according to respondents. One cleaner in the region explained that conditions were “increasing slightly” while admitting that other cleaners haven’t been as fortunate. “[There were] five dry cleaners in town, now I'm the only one.”

Though other cleaners in the region provided similar reports, some are seeing improvement. “It’s [been] getting better for [the] last six weeks,” says one respondent from the West. “I have started using online advertising to add new customers.”

An operator from the South shared the same sentiment regarding investing in advertising and marketing, but also explained that “market conditions in our area are somewhere between static and slight improvement.” This is a reflection of the region’s slight 0.4% decrease in sales last month year-over-year, and its 1.2% sales increase for first-quarter 2013 over first-quarter 2012.

The Midwest and the Northeast reported sales decreases for March and for first-quarter 2013.

Sales in the Midwest fell 3.8% last month and 2.0% in the first quarter. The Northeast took the hardest hits, with March sales falling 4.0% from the previous March and first-quarter sales down 2.9% compared to first-quarter 2012.

“Year over year, the conditions are getting worse,” says a cleaner from the Midwest. “2012 saw an increase over 2011, but now sales are back to 2011 levels, although April is starting out ahead of last year.”

An operator from the Northeast remains optimistic, saying that “conditions seem to be getting better” while emphasizing the importance of customer service. “It’s one thing to say you are customer-focused, but it’s completely different to actually do it. If you are standing still waiting for improvements in your business, you will never move forward.”