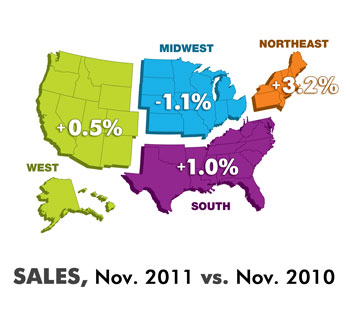 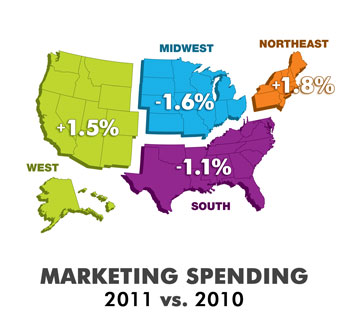 CHICAGO — Sales grew in three regions of the United States in November 2011, according to this month’s StatShot survey. Dry cleaners in the Northeast reported the biggest surge, with sales up 3.2% from November 2010.

Sales grew at a more modest pace elsewhere, with the South up 1.0% and the West up 0.5%. Midwestern operators saw their November 2011 sales fall 1.1% from the previous November.

“2011 was another challenging year,” says a Midwestern operator. “It can be most clearly defined by the statement that, ‘flat sales are the new up.’ With slight monthly increases year over year, there is a clear expectation that 2012 will be a good year.”

“Struggling, pulling out all the stops,” reports an operator from the South. “Trying everything to generate sales. Just slow to no response.”

“Business is still spotty, but improving,” reports a Western operator. “I feel next year will be much better.”

Marketing budgets for the year varied, with operators in the Northeast boosting spending 1.8% in 2011, followed closely by the West with a 1.5% increase. Operators in the Midwest cut marketing spending by 1.6%, while those in the South spent 1.1% less.

On average, dry cleaners nationwide reduced their marketing spending in 2011 by 0.3%.

“Without increased spending on marketing, I just don’t see how a service business such as dry cleaning would grow in this economy,” says a Northeastern operator. “Consumer spending is much more selective now than ever. Your product and image need to be top-notch to gain the attention of new customers.”