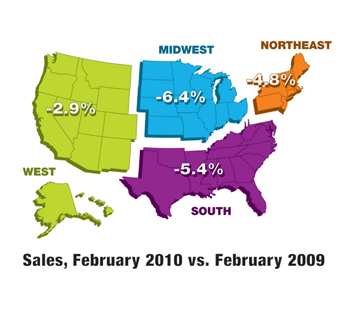 CHICAGO — Drycleaners nationwide reported subtle improvements in the business climate, according to this month's StatShot survey, but February's freak snowstorms kept year-to-year sales declines common.
Sales dropped 6.4% in the Midwest last month from February 2009. In the South, where unexpected, heavy snowfalls paralyzed major metro areas such as Atlanta and Washington, D.C., sales fell 5.4%.
Drycleaners in the Northeast, which also experienced unusually heavy snowfalls in February, reported a sales decline of 4.8%. Those in the West - least affected by winter weather - reported only a 2.9% year-to-year drop.
Perhaps significantly, the number of drycleaners reporting sales gains and the number reporting declines was roughly equal in the warmer climes of the South and West. Sales declines were the rule in the snowbelt.
"Severe winter storms in February killed sales, and you just don't get it all back," one drycleaner in the Midwest says. "Huge snowstorms were detrimental to our business," says another, from the Northeast. "March is proving to be a little better."
Asked whether they had increased capital expenditures on equipment and supplies since this time last year, operators in the Midwest and Northeast led decreases in spending with -4.4% and -7.5%, respectively. Drycleaners in the West have decreased expenditures 3.2%, and those in the South are spending a scant 0.2% less.
However, more drycleaners in every region report they are keeping expenditures flat, according to the survey. "We are not purchasing anything that is not absolutely necessary," says an operator from the South. "We take care of equipment and facility repairs when needed - nothing else."
Several operators see the declines easing, the survey said. "Conditions are definitely improving, and have been improving since November," says an operator based in the Northeast. "I think our spring season will be very busy."
AmericanDrycleaner.com's StatShot includes information on sales, wages, costs and other financial data based on anonymous survey information provided by industry operators. Subscribers to American Drycleaner's Wire e-mails are invited to participate in these unscientific surveys, which are conducted online via a partner website, on a regular basis. Readers are encouraged to participate, as a greater number of responses will help to better define industry trends.
Click here and follow the menu instructions to sign up for the free e-mail service.