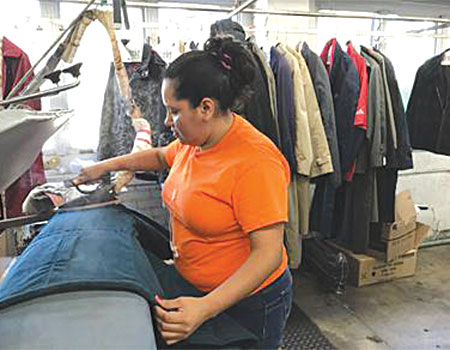 It’s become a fall tradition, the firm writes, for the past several years, Libertyville Rotary Sunrise and Zengeler Cleaners have teamed up to collect coats, gloves, scarves and other winter clothing in support of the nation’s veterans. It’s their way to say “thank you” to our vets for providing the freedom we enjoy.

With surviving veterans of World War II, the Korean War and Vietnam, it continues, along with thousands more who served in the Middle East and in other conflicts, there are literally thousands of veterans in the United States, too many of whom have fallen on hard times since their return to civilian life.

“There are many challenges facing our veterans when they return from active duty,” notes Tom Zengeler, president of Zengeler Cleaners.

“Examples are readjusting to civilian life and returning to the workforce. Sadly, many of the jobs they held before leaving to serve their country are no longer available, which makes the prospects of finding meaningful work more difficult than ever,” he points out.

“To help in this time of need, Libertyville Rotary Sunrise, Zengeler Cleaners, our customers, and many others wanted to make a positive difference in their lives as one small way to show our gratitude for the sacrifices these heroes have made on behalf of all Americans.”

For out-of-work veterans, the cleaners writes, food, shelter and clothing are often quite difficult to come by, particularly when it comes to seasonal items, such as winter coats and jackets. That was the motivation that launched the initial collection drive several years ago.

“Support for this worthy cause has grown each year,” says Zengeler. “Many people came together with timely donations to show how much we care about our veterans.”

The response to the annual collection drive has been tremendous, he adds, resulting in a collection that included 5,286 coats and jackets along with gloves, scarves and other winter apparel.

Zengeler Cleaners’ two Libertyville stores once again served as drop-off locations for the donations. After the items were collected, the cleaners inspected, repaired as needed, and cleaned every donated item. They also supported the effort by delivering the clothing in time for Veterans Day on Nov. 11, 2017.

Rotary International is a worldwide organization of business and professional leaders that provides humanitarian service, encourages high ethical standards in all vocations, and works to build peace and goodwill in the world.

Approximately 1.2 million Rotarians belong to more than 34,200 clubs across the globe.