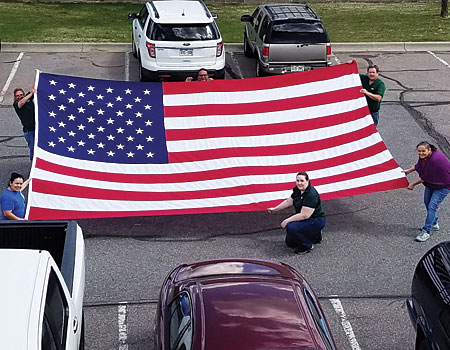 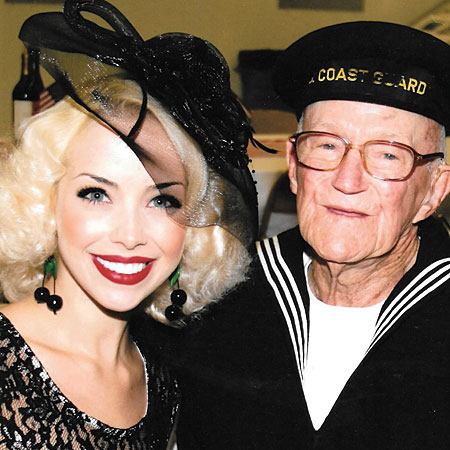 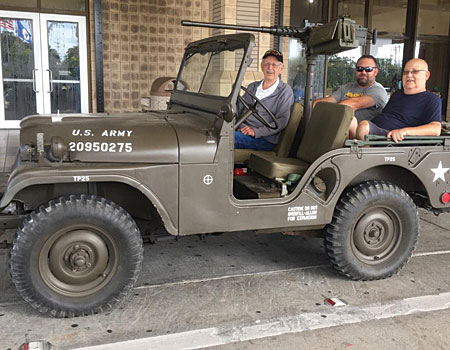 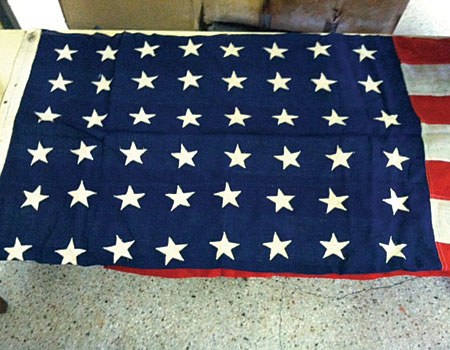 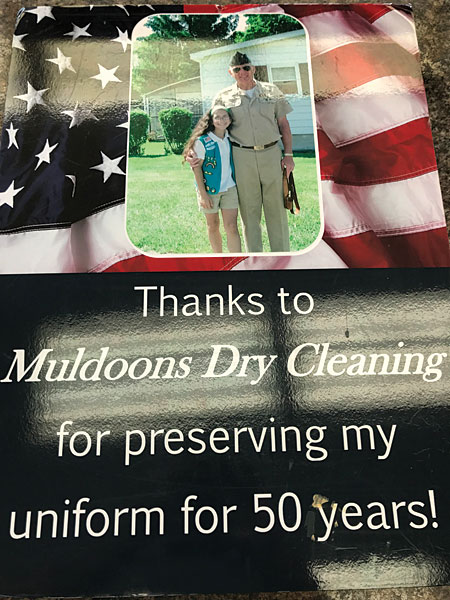 A few patriotic stories representing all that dry cleaners do for U.S. veterans and service personnel

CHICAGO — Happy Fourth of July! Let’s celebrate once again at this time of year with parades, fireworks, friends and family, and with shared stories from dry cleaners of a patriotic nature from the fabricare industry. So many dry cleaners do things for U.S. service personnel and veterans, including cleaning flags, uniforms and much more. Following are just a few stories that help represent all that cleaners do. Enjoy these, and have a fun, exciting, patriotic and safe 4th!

Dave Wood, owner, Lapels, located in Littleton, Colo., shares this: “Our team members are holding up a 12-by-18-foot American flag brought in by a local college’s veterans association. We cleaned and pressed it, no charge. Don’t remember the guy’s name but it was the Arapahoe Community College Veterans Association,” he relates.

“It flies over their campus.”

Matthew Porche, owner of Uneeda Cleaners Dry Cleaning and Restoration in Houma, La., shares this special story: “I sit on the board of directors at the Regional Military Museum here in Houma. Our drycleaning plant does most of the textile cleaning and restoration for the museum. Our little museum is very unique in that we are a hands-on museum. We keep all of our vehicles in operational order, and we will take museum visitors for a ride in a jeep, upon request.”

Porche says: “We hope to give our visitors a real sense of what it was like to serve in the military. We keep a Higgins Boat LVCP Landing Craft in the water, ready to take groups for a cruise. Someone can even schedule an opportunity to shoot a Browning M2 ‘Ma Deuce’ 50-caliber machine gun. Blanks of course!”

He relates that “at the museum’s last official count, they have at least 998 uniforms in their collection, which runs the gamut of all military branches,” including but not limited to German, Russian, Swiss, Polish, and an American-trained Korean soldier, and two U.S. generals.

“Our oldest is a Red Cross uniform from WWI. Quite a few Merchant Marine and Coast Guard uniforms are also included,” Porche notes.

His cleaners restored most of these garments in an effort to insure long-term preservation. “We have also worked on a few WWII throw pillows. One of the more unique projects was a silk parachute. We have the utmost respect for our vets, so we do all of the work pro bono,” Porche points out.

Jim Falkowski, owner, La Mar Dry Cleaners, Miramar, Fla., shares this story: “This flag (see photo) was brought to me to dry-clean a few years ago. It has 48 stars! The person had family from Alaska and they had the flag before Alaska became a state. They think it’s from the 1930s. It had some moth holes and very weak spots. We were honored to clean it! Of course it came out great!”

Editor’s note: About our 48-star American flag, from the website usflag.org: “On July 4, 1912, the U.S. flag grew to 48 stars with the addition of New Mexico (Jan. 6, 1912) and Arizona (Feb. 14, 1912). An executive order by President Taft, dated June 24, 1912, established the proportions of the flag and provided for arrangement of the stars in six horizontal rows of eight each, a single point of each star to be upward. This flag was official for 47 years, longer than any other flag, through two World Wars.”

Lane Clark, president of Amityville, N.Y.-based It’s A Wash USA, an executive laundry service, shares this story: “There was once an officer who was notified late on a Sunday evening of a detail the next day, requiring him to wear his dress uniform. Unfortunately for him it was located in his house 45 miles away from work, in a wrinkled ball. Being that it was 8 p.m., he was in a bind.

“The officer found us online and asked if our store was open 24/7. Understanding the situation he was in, we sent a driver to his house at 11 p.m. that same night, and made sure his uniform was cleaned and pressed, to be delivered first thing next morning,” Clark says.

“We were able to deliver it directly to his assignment, allowing him to be on point, looking proper, and serving the public. As per our promise, the cost to him was nothing. It was truly our pleasure to serve those who serve us.”

He also adds that, “Our Laundromat has a specially programmed machine allowing firefighters to clean their turnout gear, eliminating cancer-causing smoke debris embedded in their gear after fighting a fire.”

Clark notes: “Rather than having to send it out and wait weeks, often at their own expense, we strive to continue to take care of everyone, and especially those who take care of us.”

Russell M. “Rusty” Smith, president and CEO of Forenta, shares this story: “Since we are an equipment manufacturer, we don’t directly clean anything for service personnel or veterans. However, we have supplied pressing equipment for the United States military for many years. The company from which we descended, Forse Corp., originally started making presses for the U.S. Navy in 1941, a few months before the United States entered World War II. When we secured their intellectual property in the early 1970s, we also secured their government contracts.

“Our installations include Army bases, aircraft carriers, and battleships. Installations we are extremely proud of are the 40 presses we supplied a few years ago to Fort Myer, Va., near Arlington National Cemetery, to be used to press the uniforms of the soldiers who guard the Tomb of the Unknown Soldier, and also for taking care of other military uniforms, including the military band.

“More recently, we supplied the presses for the USS New York, whose hull was partially made from recycled steel from the World Trade Center remains. As you can see, we have a rich and patriotic history in garment care for the military.”

Joseph D. Gagliostro, owner, Muldoon Dry Cleaners Inc, Auburn N.Y., shares this: “Cool gift of this photo (see photo) that this veteran made up for me. He has been bringing his uniform in for over 50 years on a yearly basis for the Memorial Day parade going back to my grandparents. We’ve never charged him a dime. He tears up every time he comes in.”