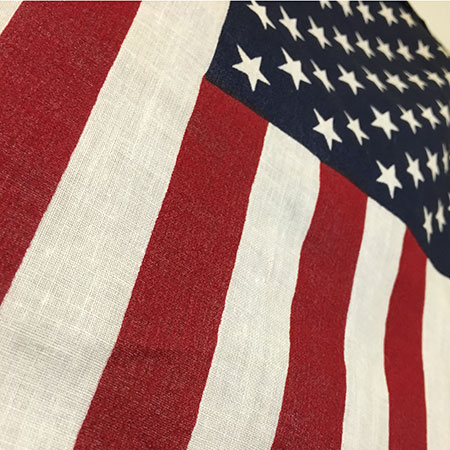 Dry cleaners from across the country share patriotic memories

At our behest, a few dry cleaners from across the United States share their favorite stories of a patriotic nature that involved drycleaning operations.

(Editor’s Note: Thanks to the many dry cleaners who told us they offer free U.S. flag cleaning and also special discounts to our U.S. military personnel all year long! So many of you across our industry offer this every day of the year. Recognizing all of you, we proudly say thank you!)

On to the memories:

“A soldier comes into our store on a late Friday afternoon. He says he needs his dress uniform cleaned and ready for 7 a.m. the next morning. Even though we’re not open at 7 a.m., we get it done. Why did the soldier need his dress uniform that quickly? He was attending the funeral of a member of his platoon from Afghanistan. It was the fifth member of his platoon to die there.” — Dave Wood, owner, Lapels, Littleton, Colo.

“A customer brought in a circa 1950 American flag with 48 stars that measured over 20 feet wide. The flag was brought in by Capt. Tom Tokartz, a service veteran who belongs to the WWII Round Table of Central Virginia. Capt. Tokartz had us clean the flag, and then presented it to the WWII Round Table at their forum, where it was used as a backdrop for their speaker that night. He was gracious enough to invite us to come to the forum, and I have to say that we were honored to be there. The program that evening featured a first-hand account of B-29 bombing missions over Germany in 1945 from 2nd Lt. Phil True, who was a navigator on one of the planes.” — Norman Way, vice president, Puritan Cleaners, Richmond, Va.

“There is a funeral home near one of our locations that does a lot of military funerals, so they bring us their new flags that will be used to drape coffins and we press them for free so that they look nice for the military funerals. Just a small thing we do to honor those who have served.” — Chuck Haddox, senior vice president of operations, MW Cleaners, Houston, Texas

“We do embroideries and sometimes get one that is of a military nature. Also, we preserved the bomber jacket and uniform of WWII U.S. Air Force pilot Cleo Rowley, who passed away last year. His daughter, Sarah Pennell, asked us to do this. We considered it an honor.

“He flew 27 missions during the summer of 1944. Stationed in England, he kept a regular journal of his experiences during the war, including flying his fourth mission on July 11, his birthday, which lasted 7½ hours, and taking anti-aircraft fire, called flak, during several other missions. His story can be read on blog.shorescleaners.com; click the July 2015 link on right and then the Real Hero’s Spotlight link.” — Brian J. Harrell, general manager, Shores Fine Dry Cleaning, High Point, N.C.

“Every so often, when I see a military uniform come through our plant, I’ll make it a point to add the ‘Thank You for Your Service’ discount, and zero-out the entire order. It’s just one way to let our servicemen and women know that their sacrifices are appreciated.” — Mike Bleier, owner, Greenercleaner, Chicago

“Our team once cleaned a priceless, unique military banner that has colorful streamers representing each battle the U.S. Army ever fought. After the 9/11 attack struck so close to home, damaging the nearby Pentagon, we cleaned Pentagon flags and other items at no charge.” — Buddy Gritz, owner, Presto Valet, Alexandria, Va., and U.S. Air Force veteran

We hope you enjoyed this special feature, and intend to bring it back again next summer.

Have a story to share? E-mail [email protected] and we may include it next time around.

Have a happy and safe Independence Day!