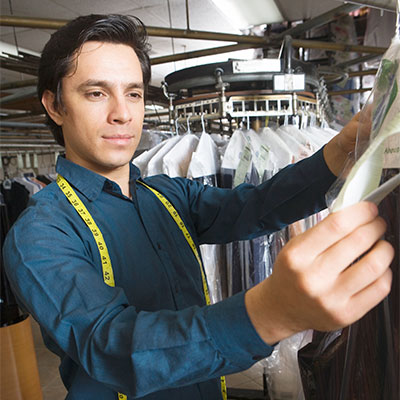 Expert advice on how to handle wrinkling, broken buttons, shrunken wools and more

“Most of these are relatively inexpensive or even free ways of correcting problems,” Johnson told a Clean Show audience of textile care professionals while addressing the causes of these problems and more.

The cause of that shine on dark fabrics is probably a result of flattened fibers through wear, hot irons, or over-steaming. The flattened fibers reflect light, resulting in a shiny surface. If the fibers are simply flattened, wet the garment again with light steam and brush the spot with a hard-bristled brush. Run the garment through a rinse cycle, then wet and reshape it. If a hot iron has melted and fused the fibers, there is nothing that can be done.

One obvious reason for an old hemline that won’t go away is that it’s stayed in that position for so long that the fibers have been broken, or dirt and soil have become ground into the fabric, or it’s simply a crease of long standing.

If it’s a crease, lay a coat hanger across the old hemline, Johnson says. Steam it, which condenses water on the coat hanger, puts the water along the line and makes the fabric soft. You then bring the press head or the hand iron down onto the crease, reshape the fibers and press the crease out.

“You can use a water mister or bottle steam from your press,” Johnson says, “but that doesn’t normally give you enough water to get the crease out. A coat hanger will.”

Brushing a 50-50 mixture of drycleaning solvent and detergent over the old hemline and drycleaning immediately will remove any dirt or soil that may be causing the problem. Broken fibers cannot be fixed, he says.

Like old hemlines, pocket impressions can be an unsightly problem. When a coat pocket is sewn shut, it seems to be impossible to get inside to get the pocket to lay flat. Johnson suggests using a chopstick or other long tool, slide it between the threads and straighten out the pocket without breaking the threads.

“Some people don’t keep enough solvent in the tanks to get the clothes clean,” Johnson says. “The garment may release more dirt than the solvent can hold, so it has to go somewhere. It will redeposit on the load.”

You need a gallon of solvent for every pound of fabric. Some machines may not be able to handle that, so at the bare minimum, use three-quarters of a gallon of solvent per pound of clothing, Johnson says. That will give you enough solvent to flush away the dirt so it won’t redeposit.

Another cause may be that the cleaning cycle is too short. Most of the dirt and soil are released from the fabric within the first few minutes of a cycle, Johnson says, and it will take 10 to 15 minutes of solvent cycling through the filter to pull out the soil. If a cycle is stopped after, say, six minutes, all the solvent is full of dirt, which has to go somewhere, so it redeposits on the clothes. This causes graying and dingy clothes as well as odor.

A white chalky area may appear on silk garments. Johnson says someone has gotten too rough on the spotting board, usually rubbing too hard on the fabric with a bone spatula. Light hits the broken fibers differently so it looks like a white area. Also, if a silk garment has been wet cleaned, it will develop white lines going through the fabric.

The solution to mask or hide this problem is to use a mineral oil bath. Use 6 ounces of mineral oil to 1 gallon of solvent, dunk the garment so it is completely wet, and then dry or drip-dry. If the solvent used with the oil is the same as what is being used in your machines, return the garment to the machine and use that drying cycle. If the solvent doesn’t match, you’ll have to drip-dry the garment.

There are mineral oil mixtures available for purchase, just check the solvent used. Don’t use more than 6 ounces of oil; more will make the garment oily to the touch and it will make the color darker. If the technique is messed up in some way, it’s easy to fix: dry clean to remove the oil, and start over again. The drawback is that every time this garment is cleaned, the same technique will have to be applied.

The mixture can be reused, although after a while it will pick up some color from the garments. Johnson says this usually isn’t a problem since the white spots are usually only on dark colors. And the technique works well for any natural fiber, not just silk.

If there is actual color loss or fiber damage, the spot cannot be fixed.

Hydrogen peroxide can be used as a bleaching agent, and even with the addition of ammonia, the process can be slow. To accelerate the process, place a steam gun close to the solution, a technique that comes with plenty of warnings.

A better way, Johnson says, is to fold two white towels in quarters—four layers—and place one towel under the fabric directly under the stain. Apply to the stain a couple drops of hydrogen peroxide, then a couple drops of ammonia. Fold the second towel in quarters and place on top of the stain. Take it to the press and, using a hand iron, steam the top towel for 5-6 seconds. Be careful, the towels will be extremely hot.

The heat accelerates the chemical process. The towels are to keep the bleach away from the press and the iron.

An audience member brought up the problem of black and white garments, with the black dye bleeding into the white portion of the fabric.

Kirby says DLI has issued a number of alerts and bulletins on this issue, to help dry cleaners communicate with the customer that it’s a dye problem that cannot be predicted or prevented. Often the bleeding will stop eventually, but the problem with the varied-colored fabrics will continue to plague the industry.

Another question concerned the shoulder pads of women’s dresses sticking to the hangers. Johnson says he has seen garments stick to plastic hangers, mainly because the garment was still wet or warm and the solvent or heat melted the plastic. Be sure the garment is completely dry before hanging it.

The population’s expanding waistlines was another concern. An audience member wondered about upcharging for the large garments because of increased processing times. Johnson says as long as the upcharging is for additional processing and labor, and that garments from both genders are charged the same, there shouldn’t be a problem with an increased cost.

The question-and-answer portion concluded with a question about women’s jacket constructed of bonded fabrics. The fabric bubbles, no matter what cleaning instructions are followed, and there is no way to fix the issue, an audience member says. Kirby says DLI has issued a bulletin on the problem, and that it’s a manufacturer defect.

Jean Teller is contributing editor at American Trade Magazines. She can be contacted at [email protected].