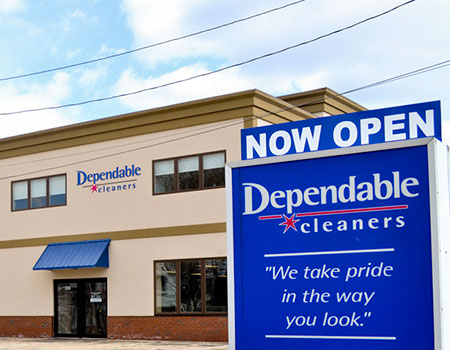 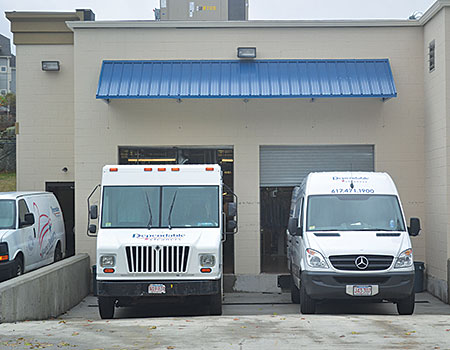 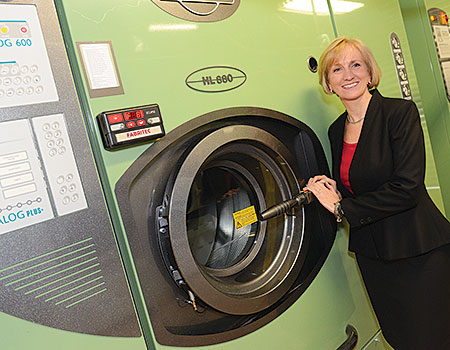 QUINCY, Mass. — Within days of the four-alarm fire that consumed all or parts of Dependable Cleaners’ home office, store and production facility on Quincy Avenue in July 2012, chief executive Christa Hagearty was working to figure out what it would take to rebuild.

“That building had our offices, one of our largest plants that serviced seven outside stores, a retail store and a Laundromat,” Hagearty writes in her Plant Design Awards entry that earned her facility the special honor of Outstanding Reconstruction. “The new design was a collaborative process involving many on our team as well as outside advisers.”

Among the early design decisions were to move the building 10 feet farther from a neighboring business with which it shares a driveway; clear out the hill behind the building to create more employee parking; switch locations of the store and Laundromat; add a second loading dock and two additional garage doors; add a mezzanine over the drycleaning area to hold the water tank, gas booster, compressors, and some equipment supplies; add a sophisticated sprinkler system, including placing sensors in the duct work; and switch from swamp coolers to air-conditioned spot cooling.

As for the plant, Dependable placed its wetcleaning washers and moisture-control dryers next to its drycleaning machines so cleaning staff could easily sort into and use the wetcleaning equipment. Washers in both the drycleaning and laundry departments operate using the same programs, giving the plant redundancy and flexibility. Steam and exhaust from shirt units are piped outside the building. Screw rails bring clothing from finishers to the inspection/assembly areas, then the garments feed into an assisted assembly station and, ultimately, an automated bagger.

The store and Laundromat opened in mid-February 2014, and the production facility opened in late March 2014.

American Drycleaner extends its congratulations to all of the winners of our 54th Annual Plant Design Awards! If your company will be building a new plant, or upgrading a facility, over the next year, be sure to document your progress and enter your construction or renovation project in the 55th Annual Plant Design Awards to be presented in early 2016. Watch American Drycleaner during the latter half of this year for entry information and deadlines. Contact Editorial Director Bruce Beggs ([email protected]) with any questions. We hope to see your plant in the running next year!