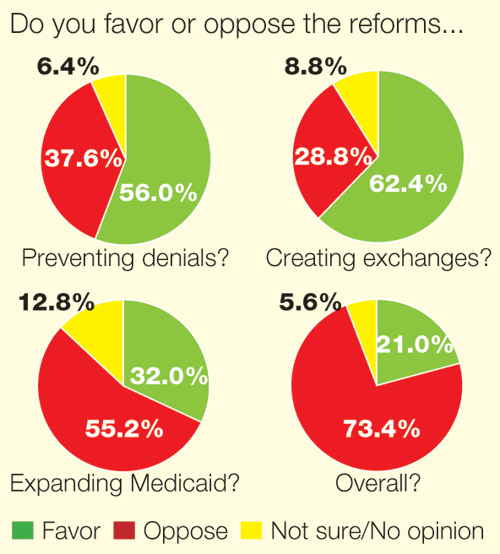 CHICAGO — Drycleaners favor some major features of the landmark healthcare reform legislation passed last month by Congress, according to this month's Wire survey, but almost three-quarters (73.4%) say they oppose the overall package, or Patient Protection & Affordable Care Act.
More than half of the drycleaners responding to the survey (56.0%) say they favor regulations that prevent insurance companies from dropping or denying coverage based on pre-existing conditions. Some 37.6% opposed this reform, and 6.4% answered "Not sure/No opinion."
Support was even more widespread for the establishment of "insurance exchanges in the 50 states where individuals and small businesses will be able to shop for an affordable plan," with 62.4% of operators in favor. Almost one-third of respondents (28.8%) oppose this feature of the reform package, and 8.8% answered "Not sure/No opinion."
Only about one-third (32.0%) are in favor of "expanding availability of Medicaid coverage to those making up to 133% of the federal poverty level (currently $29,327 for a family of four)." More than half (55.2%) are against this provision of the reform package, and 12.8% answered "Not Sure/No opinion."
Asked, "Overall, what do you think of the healthcare reform package passed, 73.4% of drycleaners oppose it; 21.0% are in favor, and 5.6% answered "Not Sure/No opinion."
While the Congressional Budget Office (CBO) says that $940 billion package will produce enough efficiencies to be budget-neutral over its 10-year timeframe, many detractors expressed concerns about the real cost of the reforms and associated red tape. "The most important question is, "Who is going to fund this?" says one operator.
"In theory, healthcare reform is long overdue and necessary," says another. "My concern is that the system will be abused, and those of us who are not at the poverty level, do not have major health issues, and do not abuse the system will end up paying for all of the above."
Some respondents expressed fears about a "government takeover" of healthcare. Others said that the reforms did not go far enough, advocating enactment of universal coverage or a "single-payer" solution. "It's a work in progress," says one operator. "The first step is to ensure that the uninsured get the needed care they deserve — rich or poor."American Drycleaner's Wire surveys readers every month on a variety of issues facing the industry. While the survey presents a snapshot of readers' viewpoints at a particular moment, it should not be considered scientific.