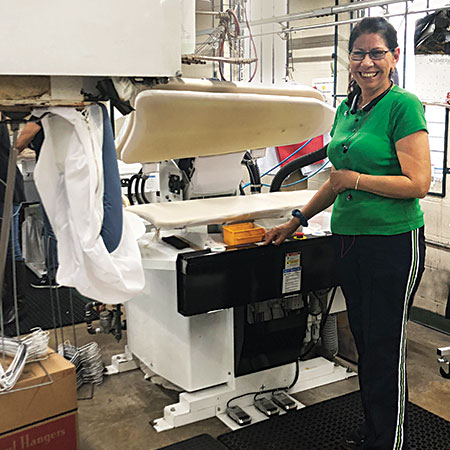 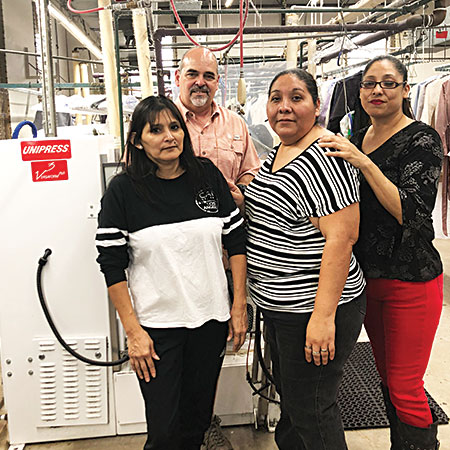 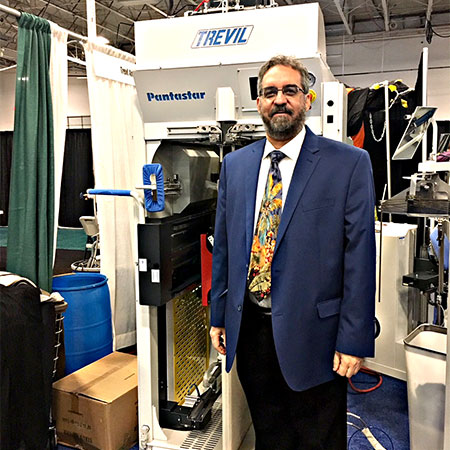 CHICAGO — The new finishing equipment entering the market today is certainly making it easier for operators to finish garments, according to Jess Culpepper, president and general manager of Culpepper Cleaners in San Antonio, Texas.

“These improvements could not have come at a better time as it has become increasingly more difficult to find a finisher with experience,” he says.

His family has been in the drycleaning business since 1911.

“I entered in 1978 as the third generation to do so. At this time, we operated one plant and two drop stores. Our goal is and has been for 100-plus years to provide the best customer service, drycleaning and laundry service to the people of San Antonio.”

Culpepper relates that the new finishing equipment he installed is “very easy for the operator to learn to use properly with minimal training.”

He points out that, “We have installed a Unipress Versa Form 3, Unipress Tensioning Coat form, Sankosha Tensioning pants topper, and several Sankosha Leggers one of which is the SDP-880U.”

All of these pieces replaced other older equipment, he adds.

“Most people don’t like change and that was true for some of (our) operators at first, but now they are all very happy with the new equipment and would absolutely put up a fight if they had to go back to the old equipment.”

On the drycleaning side, Culpepper notes, “We finish all of our cottons on hot-head presses. We have four employees that were operating four presses in that department and we were having a difficult time keeping up with our production demand. We purchased a Versa Form 3 and, to make way, we removed one of our hot-head presses.

“One operator now uses the Versa Form to steam finish all the cotton garments, which are then touched up as needed on the three remaining hot-head presses. Our production in that department has increased 15%, which certainly is a pleasant outcome from this move.”

The business also utilizes the Sankosha SDP-880U, a double-legger in which the middle press separating the two legs has a vacuum. “We have increased production by 20% at that position,” Culpepper says.

Upping productivity is always on the minds of drycleaning operators on the finishing side. But the need to find experienced operators has also become pressing. It’s put the focus on technologically advanced machines that are easier for team members to operate.

“Is it easy to learn?” That could very well be the most-asked question in the finishing area for drycleaning owners.

Enter Stuart Ilkowitz, president, Mamaroneck, N.Y.-based Trevil America, in business since 1999 as the exclusive importer and distributor of Trevil equipment in the United States and Canada.

“Whereas a few years ago, the main question people asked about equipment pertained to productivity, as in, ‘How many can it produce in an hour?’” he says. “Now, the focus has changed to where they want the machines to be easy for anyone to operate while also productive and offering high quality.”

His company’s factory in Italy is one of the manufacturers of pressing and finishing equipment since the 1970s. He points out that it is difficult nowadays, “to find workers who are reliable; show up for work every day; get along with other employees; are able to produce high-quality, finished garments at a fast enough pace; and are willing to work in the conditions of a drycleaning shop, all for the salary that a drycleaning shop owner can afford to pay.”

As Ilkowitz sees it, finding, training and maintaining employees has become a larger challenge, particularly once you get away from the big cities.

“Shop owners are realizing now that they need to focus more on the capital investment on a piece of equipment that nearly anybody can be quickly trained to operate, rather than equipment that requires a particular set of skills that takes many months of experience to learn,” says Ilkowitz.

A customer of his in Omaha, Neb. was opening a second plant: “They wanted to find equipment that would provide high-quality finishing but knew that they needed something modern that would be easy to operate, as finding experienced operators had become an issue for them.”

The cleaners purchased several pieces of equipment from his company, “including our Pantastar pants finishing machine. The Pantastar can press the entire pair of pants, including the crease.”

He notes that the operator does not require the same level of skill that someone using a conventional topper and legger press would, so it is much easier to find someone to run this machine effectively.

“They are producing around 40 pair of pants per hour with consistent high quality,” Ilkowitz relates. “If the regular operator is out one day, another operator can step right in and produce nearly identical numbers.”