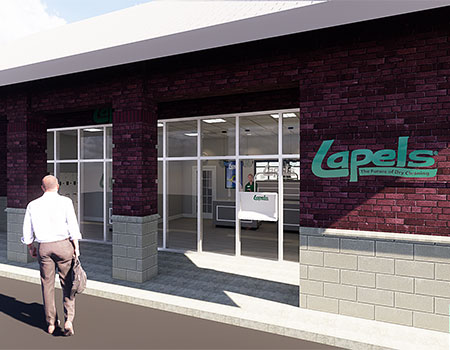 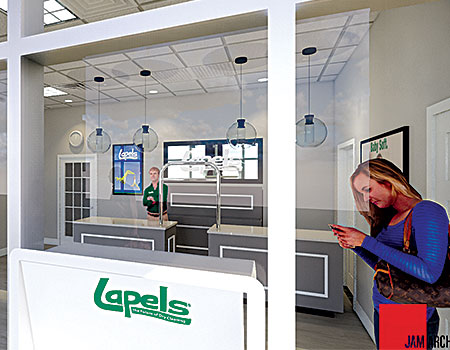 “Over a decade ago, we led the charge in building a boutique-like call area to really help make a statement when guests entered our store,” says Kevin Dubois, CEO of Lapels and co-author of Entrepreneurial Insanity in the Drycleaning Business.

“Today,” he continues, “we’re taking the next step towards elegance that is pleasing in not only all parts of the U.S. but other countries.

“As we’ve grown as a franchise and expanded across the country and now world,” Dubois adds, “we thought a more contemporary look was in order.”

The new look of this firm, it points out, “features an open floor plan with plenty of windows for natural light. Gone are the hardwood floors and wood-finished counters, replaced with slate-colored tiles on the floor, with the walls painted the same shade of gray.

The look goes beyond pure aesthetics and includes new and improved functionality, the firm relates. One of those is a drop-off area for 24/7 service.

“Utilizing a kiosk and ATM,” it indicates, “customers will be able to drop off clothes in a locker, the pass code will be e-mailed or texted to them, and then be notified when those items are ready for pick-up, also from a locker with a secure pass code.”

Most importantly, the company adds, customers will be able to access that part of the store before, during and after store hours, from a separate entrance. In an alternate design and option, its stores will have a 24/7 locker room and drop-off for 24/7 access.

The exterior will also undergo an upgrade, it notes, with full-length windows for the store front. The new store front will also feature areas for curb-side pickup.

In the future when existing stores are remodeled, they will also adopt the new look and feel, the firm reports.

“In the past year or two, we have entered several new states — Texas, Michigan, Tennessee, to name a few,” says Dubois.

“The timing for this new look could not be better as we continue to expand from our New England headquarters and establish ourselves from coast-to-coast and with international locations,” he says.