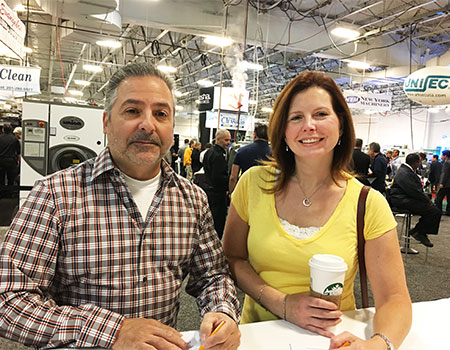 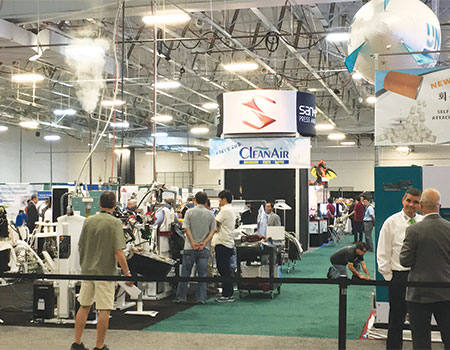 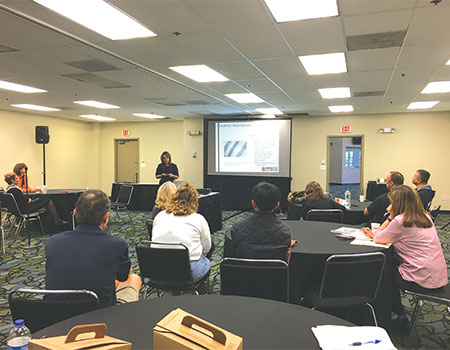 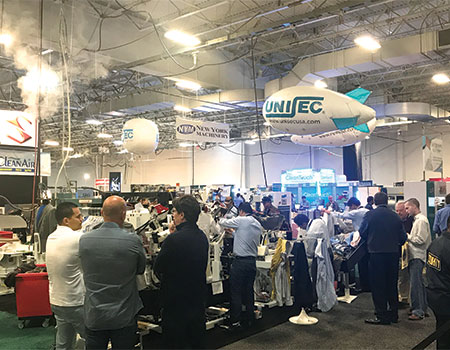 CHICAGO — Don’t tell me New Jersey isn’t welcoming. Or green. Or fresh. Or a nice place to visit — It is!

Friendly, smiling, relaxed and with a small footprint, this show was a burst of upbeat local flavor, and the unusually warm autumnal east coast weather complimented the show weekend perfectly.

The thrill of nearby New York City pulled hard at attendees shirt tails to visit, yet local drycleaning owners in the tens-of-dozens stayed “home” to see speakers and exhibitors over three days in late October when the National Cleaners Association (NCA) Texcare show convened at the Meadowlands Expo Center in Seacaucus, N.J.

Drycleaning owners like Patrick DeLora, president of Clifton, N.J.-based DeLuxe Cleaners and his wife, stopped by to check out the show and pause for a photo-op at the registration desk.

“We like this show, it’s close by for us, and we see people in our region,” DeLora indicates.

He notices one of the American Drycleaner issues in my hand and notes that he was once part of an article several years ago. We exchange business cards and, smiling, they move off toward the nearest aisle with coffees in hand, nodding to faces they immediately recognize.

Almost a neighborhood feeling of goodwill erupts in the short, wide aisles as laughs and conversations intermix at NCA Texcare.

“This is a show-up-on-the-spot type of show for many local drycleaners,” one exhibitor says nodding to me as we pass each other near the blue-carpeted NCA center-lounge area. There are tables and comfy chairs and chocolate candy.

Ann Hargrove of the NCA, and the show organizer, says: “This becomes an afternoon show. It builds as attendees continue to drop by.”

Was it a tiny show? Yes. But it felt like a big little kid, with a big lopsided grin.

Local drycleaning owners strolled in out of the fall sunshine, stepped through the airy, open doorways, nodded, registered, and networked on a very personal level. It was first names all the way.

Almost leisurely at-length conversations went on in the spaces between exhibitor booths. There was no sense of being crowded or rushed. It was.... a nice feeling.

Two other “kids” from the same ‘hood, Air World Pads and Covers, and Minda Supply both from nearby Mahwah, N.J. were here. Also Spot, Seitz, The Fresher Company and R.R. Streets & Co. had booths, among others, including Railex Corp. from Ozone Park, N.Y.

This show was a small grouping of companies situated in two expansive-feeling aisles. The spacing made the show feel bigger. Demos at B & G Lieberman Company, Sankosha and Unipress, among others, added to this noisy little “show that could.”

Another from just “down the block,” HoHo Solutions from nearby Selden, N.Y. was exhibiting. So was InnoClean from Ridgefield Park, N.J., practically in the neighborhood. And Pariser Chemical from Paterson, N.J. had a booth.

Trevil America from Mamaroneck, N.Y. and Hercules Machinery from Island Park, N.Y. were exhibiting here, as well as several others from the New York-New Jersey area, like Sudzy, right out of New York City, and positioned in a booth space right in the front near the registration area was Evangelo’s Drycleaning from the Bronx. The Bronx was even in the house!

Not to miss a trick, local boy Meadowlands Ford Truck dealer from Seacaucus even rolled in a few polished-up truck and van selections to try to generate some local business in the route and delivery side.

“We’ll probably see attendance build when the sessions get done,” Jon Meijer from the Drycleaning & Laundry Institute (DLI) and I agreed.

Jan Barlow of Jan’s Professional Dry Cleaning gave a talk as part of the Solvent Panel about a new solvent launched in the U.S. (her store was the first to try it earlier this year) called Sensene made by German-based SafeChem and Dow.

Nora Nealis, NCA executive director, talked about understanding what makes the millennial generation tick and reminded the audience at her session that dry cleaners’ best customers will always be in “their 50s and 60s. People in their 20s and 30s were never the best customers.”

She pointed out that dry cleaners today can use Instagram to reach the younger crowd, saying “give them tech, give them apps, websites,” and added that if you can clean their accessories that will lead to cleaning other items, like clothing, and eventually to building brand loyalty.

Lorynn Divita, fashion forecaster and popular fabricare industry speaker, talked about the throwaway nature of fast fashions but pointed out that change is happening as entrepreneurial companies such as Everlane, Cuyana and Blanc are beginning to shift the tide back to quality, style and full transparency in how these textiles are being manufactured.

This show’s local flavor gave attendees a chance to talk a little more in depth with one another and not feel rushed to move along as so many big shows often feel like.