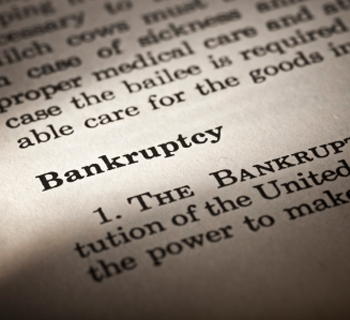 CHICAGO — Sometimes we revel in the failures of others. We say things like “I knew they couldn’t do it,” “I was sure they’d fail” or “I told you it wouldn’t work.” These comments build our confidence in our own opinions and may improve others’ perceptions of our abilities. It’s human nature and we can’t resist it, but there may be more we can learn from these experiences.
We’re used to snapshots of information today. We read newspaper headlines, but not articles. We buy summaries of books without feeling the need to read the whole thing. We skip complex explanations and rely on soundbites. The “debate” surrounding healthcare reform is a good example.
We only get enough information to chat briefly about a subject and form an opinion. We’re missing an in-depth understanding of issues, events, motivations and actions that lead to particular outcomes. If we are going to apply our knowledge to the future, we must understand past issues better.
For instance, there are lots of bankruptcies happening now, and many in the drycleaning industry. Some are filed as Chapter 11 (reorganization) and others are Chapter 7. Individuals can also file personal bankruptcy. Each of these legal remedies has its own set of rules, strategies and outcomes.
Why does a company declare bankruptcy? Was it a flaw in the business plan, a set of unfortunate economic events, or a combination of the two? A business plan won’t show a company losing money, for example, but it also won’t show an inability to get financing.
If you say that the plan was flawed, you must know what the flaws were to avoid similar failures in the future. Has a plan like it ever been successful under similar circumstances? Was failure caused by forces outside the plan?
Management might have been part of the problem, for instance. What did management fail to do? What were the skills managers lacked? These are legitimate questions—you must analyze a failed enterprise as closely as you would a successful one.
These questions are part of a learning experience. An analysis of a failed company doesn’t seek to criticize the participants, but builds understanding of the issues and conditions in order to learn how to avoid them in the future.
Bankruptcy isn’t always the end of the world for a company; it is a plan in and of itself. In the case of a Chapter 11 reorganization, the petitioner presents an action plan to the Court. It must be evaluated for its potential success  or failure. Do most of the elements of the original plan still exist in the updated plan? If so, its chance of success may be remote. If elements have changed to address problems in the original plan, the reorganization may succeed.
You can learn a lot from big companies that filed for bankruptcy such as United Airlines. United filed for Chapter 11 in 2002, blaming the Sept. 11 attacks and a drop in domestic travel for its woes. But it was really much more: The company grew fast in the dot-com boom, failed to keep costs under control, raised pilots’ pay up to 28% in 2000, and faced skyrocketing fuel prices.
Initially, the plan was to emerge from bankruptcy in two-and-a-half years; it actually took about four. But United emerged with a much lower operating cost structure, and the company is so healthy that it is now merging with Continental Airlines to form the world’s largest airline. United corrected its historical faults to move forward, implementing a plan that would help it emerge from the court’s protection successfully.
Many drycleaners have issues that are just as complex. Every owner facing bankruptcy has a plan that failed for a variety of reasons. A new plan can correct the original issues and lay the foundation for future growth, but that plan must be implemented successfully. Some operators’ challenges will prove too difficult; they will file Chapter 7. Others will continue to battle for their vision of the future.