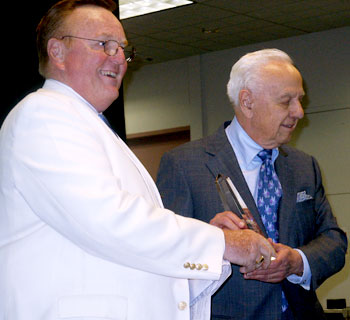 Died Saturday at home at age 92

He was born in Indianapolis and lived there until 1988 when he and wife Charlene began splitting their time between there and San Francisco.

In a Life & Times in the Industry piece honoring American Drycleaner’s 75th anniversary in 2009, Tuchman reflected on his career:

“Tuchman Cleaners started as a tiny family business consisting of my brother (cleaner and manager), my father (the best tailor in town), a spotter, a finisher and a route man. My brother was drafted into the Army in 1941 (WWII, “The Good War”), and I was picked to replace him. I was 16-and-a-half. I hated it.

“In 1943, I was drafted again — this time by the U.S. Army. At the end of the war [and a brief acting career in Hollywood], my brother and I entered into a partnership to build a ‘different’ kind of drycleaning company.

“I returned to Indianapolis still star-crazy, and called every celebrity that came through to offer them free cleaning in exchange for allowing me to use their picture in an ad saying, ‘When I’m in Indianapolis, I always bring my best clothes, because I know that Tuchman Cleaners knows how to take care of them.’”

“He was an innovator in the drycleaning industry, owning and operating more than 30 cleaning stores in Indiana and surrounding states,” his son, Mitch Tuchman, told The Indianapolis Star for a story published earlier this week. His father was a talented salesman, Tuchman says, and they would often dissect sales pitches together in his office.

The younger Tuchman, who attended Harvard Business School and is now in the investment management business, said the lessons he learned from his father stick with him every day, according to the Star report.

“I sure learned a lot (at Harvard),” he says. “But nothing like what I learned from my dad.”

Tuchman told the Star that his father had a knack for connecting with people: “He just connected with everybody, and when they met him, they’d talk, and they’d always come away with something. He always connected from the heart with people.”

In 2011, Sid Tuchman received the Drycleaning & Laundry Institute’s most prestigious honor, the Diamond Achievement Award. The award “recognizes an individual who, through his or her efforts, has raised the professionalism of the drycleaning industry.”

Surviving Tuchman are Charlene, his wife of more than 60 years; three children, Mitch, Ellen and Kathy; and seven grandchildren.

Memorial donations may be made to the Indianapolis Hebrew Congregation Foundation, 6501 N. Meridian St., Indianapolis, IN 46260.