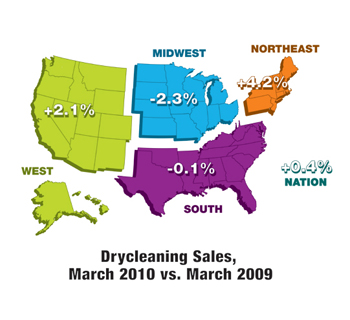 CHICAGO — March sales may finally be showing signs of a turnaround, according to this month's StatShot survey. Although unusually poor weather in February cut into quarterly gains, a majority of operators in three regions say that their March 2010 drycleaning sales improved from the same month of 2009.
Drycleaners in the West experienced the greatest gains, with more than half reporting an uptick in March sales. On average, sales in the region improved 2.1% in March 2010 over the same month a year prior. For the first three months of 2010, sales grew an average of 1.2% from the same period in 2009.
Respondents in the Northeast were the likeliest to report an increase in sales, outnumbering those reporting a decrease in sales five to one. On average, sales grew a healthy 4.2% in March. One operator from the region has seen steady improvement since November and "is starting to have some overtime." "It seems like sales are finally inching back up," says another.
However, first-quarter sales were hit hard by February blizzards, pushing average sales in the region down 0.9%. "Snow in February was a killer," one operator says.
In the South, drycleaning sales seem to have leveled off. With almost as many operators reporting sales increases as decreases in March, average sales for the month were down a statistically insignificant 0.1%. "It seems to be improving," one operator says.
Many more drycleaners reported a decline for the entire quarter, however, making an average decline of 5.6%. Several Southern operators blamed a weak labor market as the reason for continued declines. "We need to find the bottom soon, or we'll never climb out," one says.
Drycleaners in the Midwest reported the worst results. Although more operators reported better sales totals in March 2010 vs. March 2009, the increases tended to be too small to offset other operators' losses, producing a 2.3% decline in average sales.
First-quarter sales figures in the Midwest were even worse, with operators reporting an average drop of 7.1% from first-quarter 2009. The marked decline was the result of "terrible weather in February," one operator says. "February was down 23%."
Among all regions, drycleaners' sales improved an average of 0.4% in March, but fell 4.2% for the quarter. "March was the first time in many years in which we have seen a double-digit increase in sales," an operator from the South says. "So far, April is looking better, too."
AmericanDrycleaner.com's StatShot includes information on sales, wages, costs and other financial data based on anonymous survey information provided by industry operators. Subscribers to American Drycleaner's Wire e-mails are invited to participate in these unscientific surveys, which are conducted online via a partner website, on a regular basis. Readers are encouraged to participate, as a greater number of responses will help to better define industry trends.
Click here and follow the menu instructions to sign up for the free e-mail service.