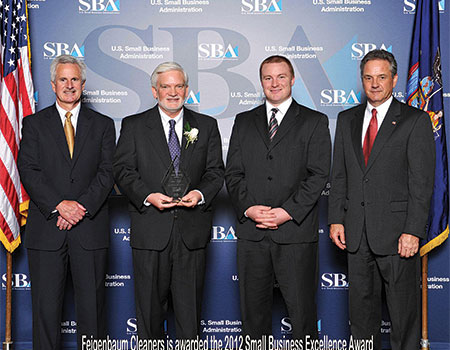 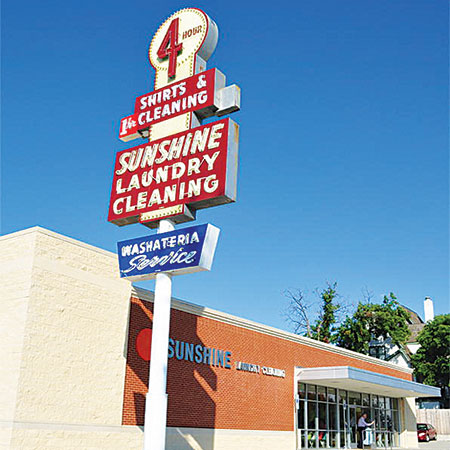 In their own words.... tales told of family pride in dry cleaning

CHICAGO — A young family man takes over the cleaning business in California. A second takes over the family business in upstate New York, having at first never envisioned being a drycleaning owner. A third proudly maintains the family name down in Texas. And all share one thing, the love of the business....

Todd Feigenbaum is the third-generation owner of Feigenbaum Cleaners, with locations in Eastern New York state.

“My grandfather was a tailor who emigrated to New York City from Europe in 1902. After spending 15 years working in the sweatshops of the Lower East Side, he heard about a tailor shop for sale in upstate New York. He put his growing family on the train, and on the way to their final destination, they stopped in Glens Falls, a small town about 50 miles north of Albany,” he says.

“Herman and Jennie Feigenbaum liked Glens Falls so much that they decided to stay and open a tailor shop there.”

They quickly discovered there was no dry cleaner north of Albany at the time, so they decided to offer dry cleaning as well as tailoring.

“All of their six children helped out in the business in one way or another. Eventually, their two sons, Louis and Bill, would take over the business in the 1950s,” he says.

Feigenbaum says his path into the business was very similar to his father’s.

“He had never planned to take over the family business, but after working as a skilled machinist building fighter planes during World War II, he returned to Glens Falls to help his father when health issues arose. Before he knew it, he was a dry cleaner!”

Feigenbaum says that taking over the business was never part of any plan when he was young.

“I worked in Washington, D.C., and Boston after college. When I came back to upstate New York in the mid-1980s, I worked as an analyst in the New York State Legislature. As my father’s health started to fail, I suggested I join him in the business to build it up, so he could retire or sell the business.

“The day after we finalized our plans, my father passed away. I had worked in the business briefly for about a year after college. I knew a little bit about the business, but not a lot. Luckily, part of my education and previous work experience had focused on management and marketing, but I still had to quickly learn the technical part of the drycleaning business.”

He went to every seminar, class and meeting that he could find.

“And I was lucky to find a number of mentors who taught me a lot about our industry. I learned the most from the late Sid Tuchman, a brilliant man and a true gentleman.”

“My wife, Julie, joined me in the business later during that first year I was running it. At that time, we just had one store. By the end of that first year, we opened our first drop store and continued to grow from there. As the business expanded, we took on a business partner, Bonnie Smith, our plant manager.”

Feigenbaum says that, “We’re here because we’ve kept our ‘old world’ commitment to craftsmanship. And with one or more family members always involved in the day-to-day operation of the business, customers know we still take pride in what we do.”

About today’s drycleaning world, Feigenbaum advises being patient: “You want to try new things, but you don’t always have the perspective to understand how complicated new ideas can sometimes be.”

The Feigenbaums are proud to be celebrating their business centennial this year.

“I’m sure my father would be quite proud that we’ve been able to grow and modernize the business over the past 30 years. And I sometimes wonder if my grandparents could have ever imagined that the small business they started in the spring of 1917 would still be in business 100 years later!”

“In the late 1920s, my grandfather, Joe Ashmore, along with his brothers, Jim and Robert, started two businesses across the street from each other in the heart of downtown Dallas. Do It Right Cleaners and Acme Cleaners operated from 1928-1955,” he recalls.

The business has operated on the same block in Dallas for over 75 years. It is a retail and commercial laundry and dry cleaner that Ashmore Jr. describes as a “state-of-the-art 16,000-square-foot production facility, 6,000-square-foot retail facility, and delivery trucks serving most of Dallas, with about 90 full-time employees.”

His job includes overseeing all aspects of the operation with a hands-on approach: “As with most in this industry, I can — and will — do everything!”

The Ashmore brothers joined forces with their brother-in-law, Eddie Vassallo, the former laundry manager for the Baker Hotel downtown, and formed Sunshine Laundry and Dry Cleaners in 1941.

They built a combined plant and retail facility on Maple Avenue in Dallas that expanded in the late 1950s and ’60s.

“The second generation included my father, Frank Sr., and his cousin, Jerry Ashmore,” Ashmore Jr. says. “The original Maple facility operated until 2011 when we built new retail across the street, and purchased a building a few miles away that became our new plant.”

The passing of the business from one generation to the next has happened through hands-on training, he explains.

“For many youth in our family, working at the cleaner is their first job. They were and are expected to pull their own weight and more.

“This business is an excellent way to teach the hard work ethic that is necessary to become successful in any industry. There is no ‘cutting corners,’ especially in the family business. Being at work on time, every day, and being at your best is demanded.

“But what is most satisfying is knowing that you are part of the family business that satisfies customers every day, and your efforts do not go unnoticed. The personal interaction with the customer is the most basic relationship in business, and that was instilled in us at a very young age, and will continue with every generation.”

Running a family-owned business means something special to Ashmore Jr.

“Our name is associated with every piece that we process, therefore high quality is a priority in every aspect of the business, from customer interaction to the delivery of a great product. Our customers know this, and have the confidence that their expectations will be met or exceeded.”

Frank Ashmore Sr., president of the business, opens the retail store every day at 6 a.m. His wife, secretary Edna, works every day and is the company matriarch. Frank Jr.’s sister, Stephanie Ingram, is the controller who maintains the books. Her husband (and Frank Jr.’s brother-in-law) Mike Ingram is vice president in charge of the route business (from which most of Sunshine’s growth comes) as well as business development and IT.

Ashmore Jr. says that Sunshine is truly a “family affair,” adding that the family-owned business has “the understanding that service is the main thing we sell.”

There you have it. Three uniquely told tales of family-owned succession success in dry cleaning.

Three stories out of so many in our industry, full of passion, pride and caring. All for the love of it.