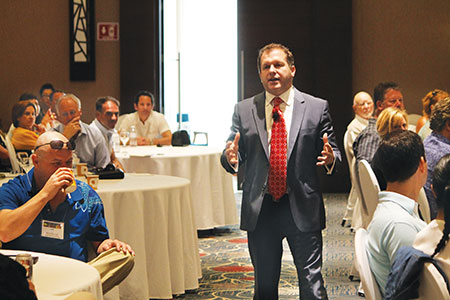 Gather, mine customer ‘intelligence’ to better serve them

CANCUN, Mexico — At a palatial resort earlier this year, John R. DiJulius III walked attendees of the Five Star & Brainstorming Conference through How to Craft a World-Class Customer Experience.

It starts with service aptitude, the noted business author explained, and becomes formidable when managers and workers alike are trained to put themselves in the shoes of their customers.

By better understanding the demands on their time, the pressures they’re under, the personal issues they may have, their likes and dislikes, etc., you improve your chances of fulfilling their needs and pleasing them while you’re doing so, says DiJulius, himself an owner of a chain of upscale spas in the Cleveland area.

As his three-hour presentation wound down, the energetic DiJulius turned his attention to the concept of “Secret Service,” which he described as being the ability to obtain customer intelligence and secretly utilize it to personalize your customer’s experience and make them say, “How did they do that?” or “How did they know that?”

“I gotta be honest with you, all the companies I’ve been using as examples—Starbucks, Chick-fil-A, Disney, even the Ritz-Carlton—have [much less] ability to get customer intelligence than you,” he says to the audience of dry cleaners attending the joint Drycleaning & Laundry Institute/National Cleaners Association event.

“Anybody who walks into Chick-fil-A, they don’t have a database to cheat from. They don’t know [this particular customer is] coming in,” DiJulius says. “When you walk up to somebody at Disney and ask about an attraction, they don’t know who you are. You guys are rarely dealing with a client or customer that you don’t [already] have information [on].”

There are four criteria to follow when establishing “Secret Service” in your business:

“It shouldn’t take 10 seconds longer to take someone’s order, or deliver it.”

“They’re not experiencing it anywhere else.”

DiJulius played a short video clip of a waiter greeting a customer by name, then asking if he wants his usual “two creams” in his coffee.

“That is ‘Secret Service,’ literally and figuratively,” he says. “How they take their coffee, what they like to be called. You start recognizing your regulars, their cars. Some places have curbside recognition of their VIPs.

“The better the experience, the less price becomes an issue.”

Workers exercising “Secret Service” should be able to pick up on silent cues and visual triggers from their customers, DiJulius says.

“They’re like night-vision goggles. They allow a new employee to be able to deliver an experience, [whether] they’ve worked here three years or three months.”

“Every business I’ve ever worked with has a ‘white cape,’” he says.

A customer coming in with a red or maroon bag has been a customer for six months or less, so the CSR should take the opportunity to remind them of the wide variety of services available, DiJulius says. Clients with black or navy blue bags have been using the business for more than six months, so don’t place an emphasis on up-selling but rather just welcome them back, for example.

But while there is a distinction amongst clients, there should be no such distinction in service, he cautions.

“We don’t treat red, yellow, black, white worse or better, we treat them differently,” DiJulius says. “Old friend vs. I’ve got to educate you more.”

While you may believe that you have a relationship with a customer, DiJulius says that isn’t the case if you can’t immediately recall two or more details from a checklist he refers to as “FORD.”

“Just because you recognize my face, or you know me from coming in a lot, doesn’t mean we’re in a relationship,” he asserts.

FORD stands for family, occupation, recreation and dreams. “If you can tell me two or more of these things about anyone, you own the relationship.”

So what exactly qualifies as being “secret”? If the action is not something you do for all—such as presenting every female customer with a rose on Valentine’s Day or offering umbrellas to customers who need them on a rainy day—then it fits the model.

“We don’t want to build this crazy model that we need superhuman beings to do,” he says. “[We want] average employees that can do extraordinary things as a team.”