Wentz served for more than 25 years as the U.S. delegate and expert to the International Standards Organization that develops international consensus standards on textile and apparel performance, according to a biography written by Hohenstein.

The Institute notes that Wentz was an active stakeholder in the U.S. EPA’s Design for the Environment, Garment and Textile Care program, among others.

At Wentz’s retirement from Hohenstein in 2009, Prof. Dr. Stefan Mecheels, third-generation owner and CEO of the Institute related: “We pay homage to what you, Manfred Wentz, have done for the textile industry in such an outstanding way. During all the years, you’ve always been there rendering many different services and setting decisive initiatives for the market. For that, I would like to personally express my gratitude. You have earned our unstinting respect for your life’s achievements.”

Prof. Josef Kurz, associate director of the Hohenstein Institute who has worked there 62 years says: “Manfred Wentz was a strong supporter of environmental protection in the drycleaning industry and made a significant contribution to the implementation of higher standards in the handling of organic solvents, which contributed to a significant reduction in emissions. These successes have also been acknowledged throughout the world.”

In the early 1990s when there was concern about the drycleaning industry’s role in pollution contamination issues cited by the EPA, Wentz was called upon to be a steadying voice of reason, one who could talk from experience to all sides.

In those days, Wentz also helped create, along with other industry leaders, a grassroots group called the Fabricare Legislation and Regulatory Education Association, or FLARE, to bridge the gap between drycleaning owners and politicians over environmental concerns.

From even earlier days, Wentz was quoted in a U.S. Department of Labor bulletin about job safety called OSHA and Small Business. He was quoted about solvent hazards in drycleaning plants saying a “more serious hazard involves something we’re just now in the process of learning more about — cleaning solvent vapors.”

He went on to say that perc vapors can get in the air, giving off what he described as a “faintly sweet ether-like smell at 50 parts per million of air.

“I’ve personally been overcome twice,” Wentz was quoted in that same 1974 article. “You feel as if you are enormously drunk and can’t stand up straight and don’t really care too much about it either!”

“Fond memories include driving a U-Haul truck to move Manfred and family to North Carolina — Chris and Sabrina in the VW, with Manfred and his wife Gisela, their cat Whiskey, and me in the U-Haul for eight hours! Whiskey was decidedly unhappy with the arrangements!

“Then there’s the time we did work for a large fabric company who needed a finish removed from a fabric, and the only way to do that was in a drycleaning machine loaded to the gills with chloroform. Unfortunately, the machine we had leaked vapors like a sieve so we had to close-off that end of the building and wear oxygen tanks!”

Wentz left an enormous legacy. He had a great scientific mind and a gentle way connecting with people, reaching out to others to share his curiosity of the world.

He also gave fabricare a lifetime of achievement in creating awareness to raise up textile standards and certification systems, while always looking to help make our world a better place.

Young provides some lasting thoughts about this inaugural Publisher’s Impact Award recipient: “My fondest memory is a time when we finished a group lunch at a restaurant, after a morning meeting.

“I had asked for his insight to solving an industrywide problem. The stripes were coming out of laundered shirts. He stayed behind at the table, after everyone else had left the restaurant. We talked about time, temperature, and pH. He cared enough to give me the benefit of his knowledge and experience.”

The problem turned out to be the strength of the sour being used in the laundry. The sour, otherwise known as the acid neutralizer, reacted with the wear points in the shirt, and the colored threads were being loosened and flushed away. “But to listen as he broke down the possibility of ‘thermal cracking’ was something special for me,” Young says.

Wentz cared enough to share the wealth of his knowledge and insight to a single cleaner, as well as government and business leaders around the world, Young says. “He was focused on the health of garment care for the future.”

It can be said that, in his life’s work, he truly cared deeply about the people he met, the fabricare industry, and about the health of our world. That’s why Dr. Manfred Wentz is our first-ever recipient of the 2020 American Drycleaner Publisher’s Impact Award.

Check back Monday for the conclusion. 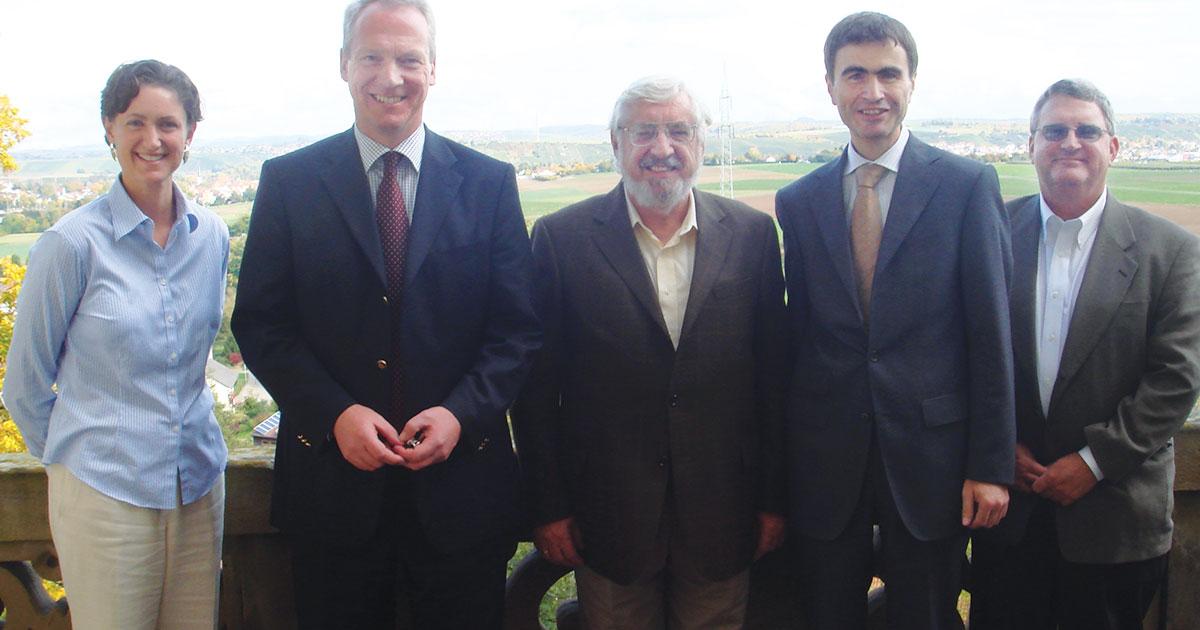 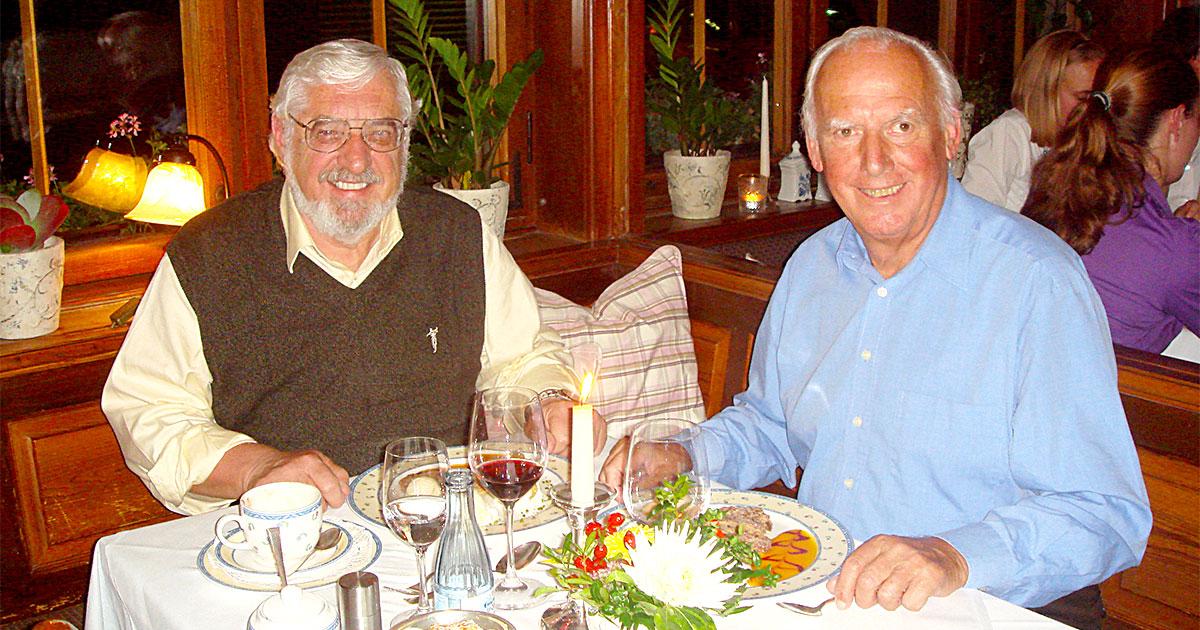 Wentz and Josef Kurtz share stories and smiles over dinner. 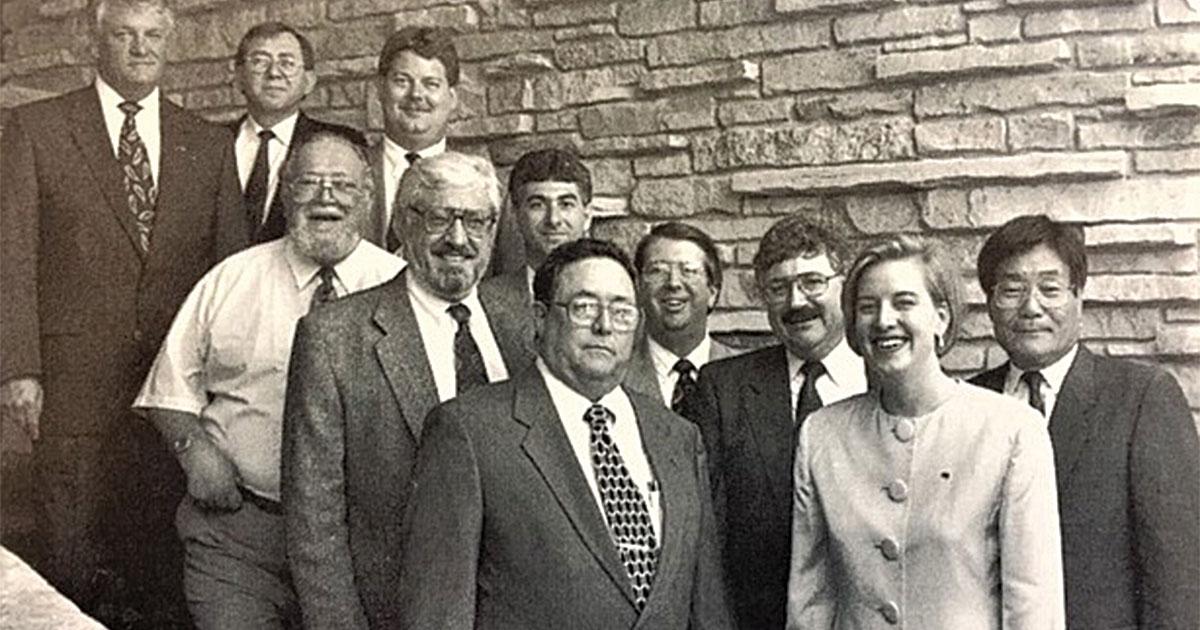 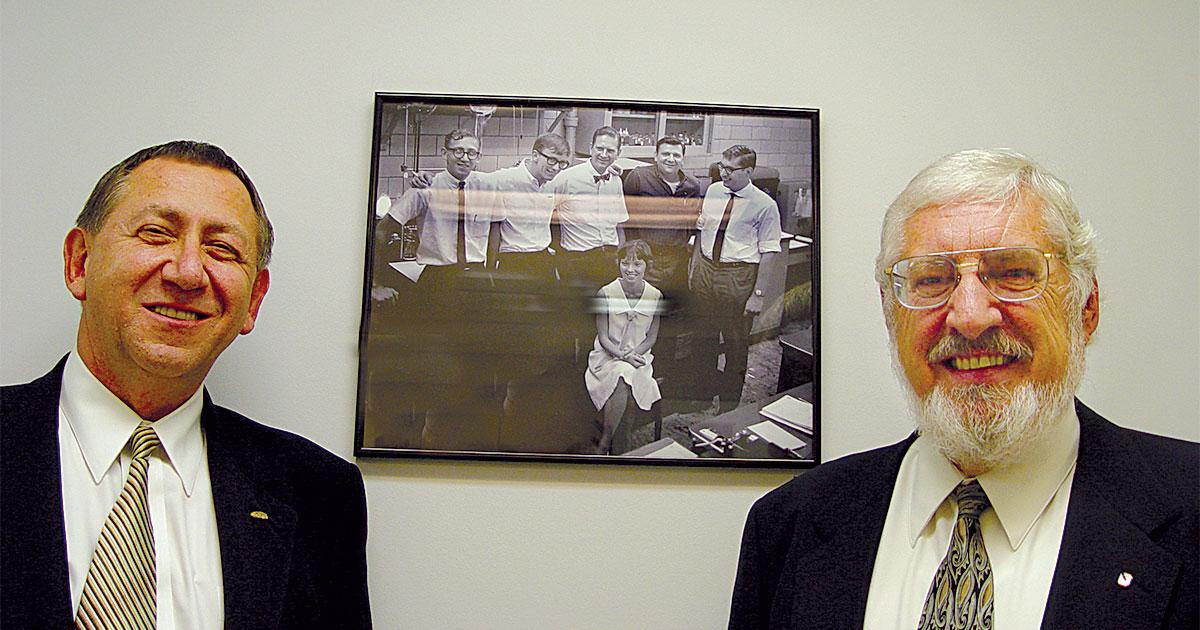 Bill Fisher, at left, and Dr. Wentz standing next to their younger versions in the photo behind them. This photo was taken at the grand opening of DLI’s new building in Laurel, Md., in 2004. In the old photo on the wall, Wentz is on the far right and Fisher is on the far left.