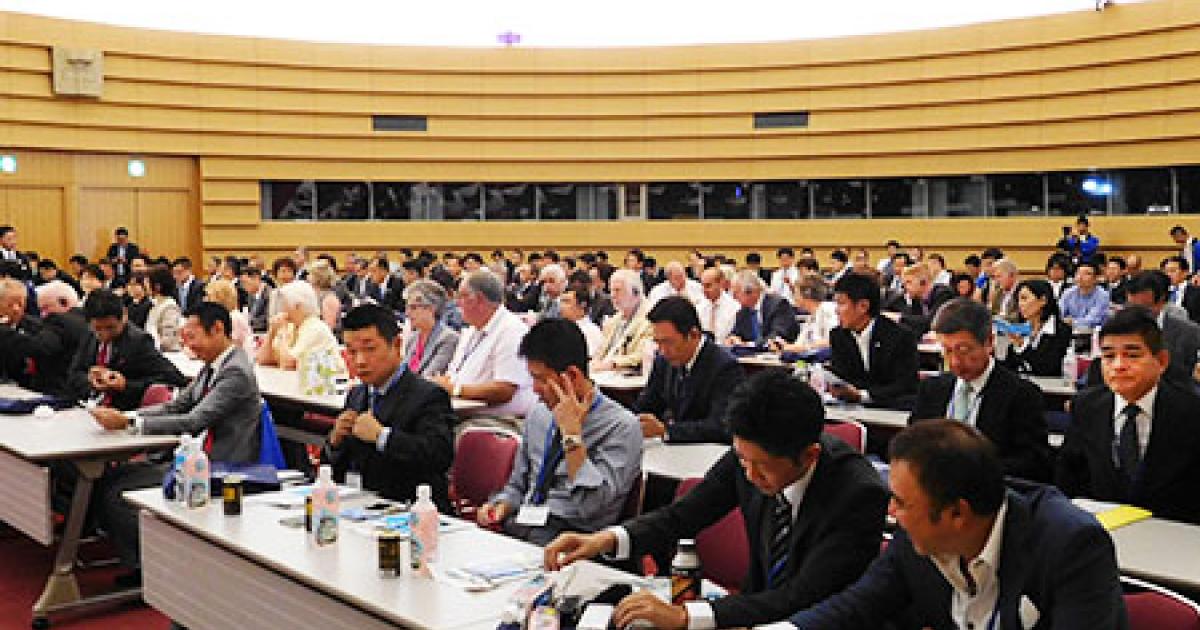 International Drycleaning Congress (IDC) attendees were aided by translators in a scene reminiscent of the United Nations General Assembly. (Photos by Diana Vollmer) 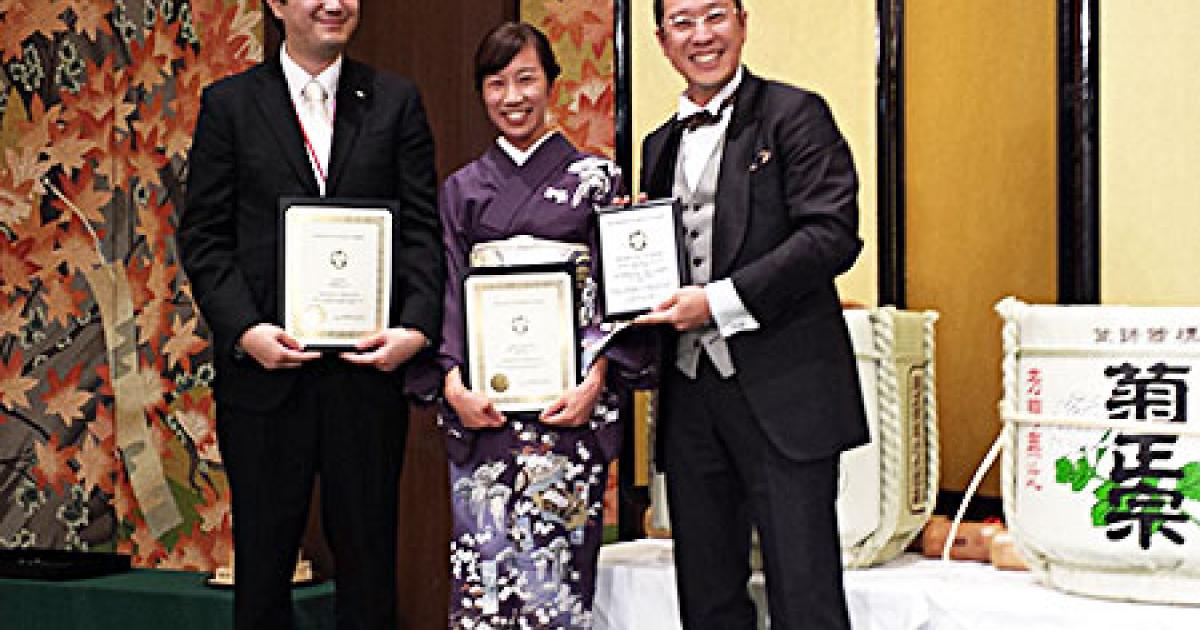 Keisuke (Ken) Uchikoshi (right), president of Sankosha USA, was presented with the IDC Drycleaner of the Year Award. 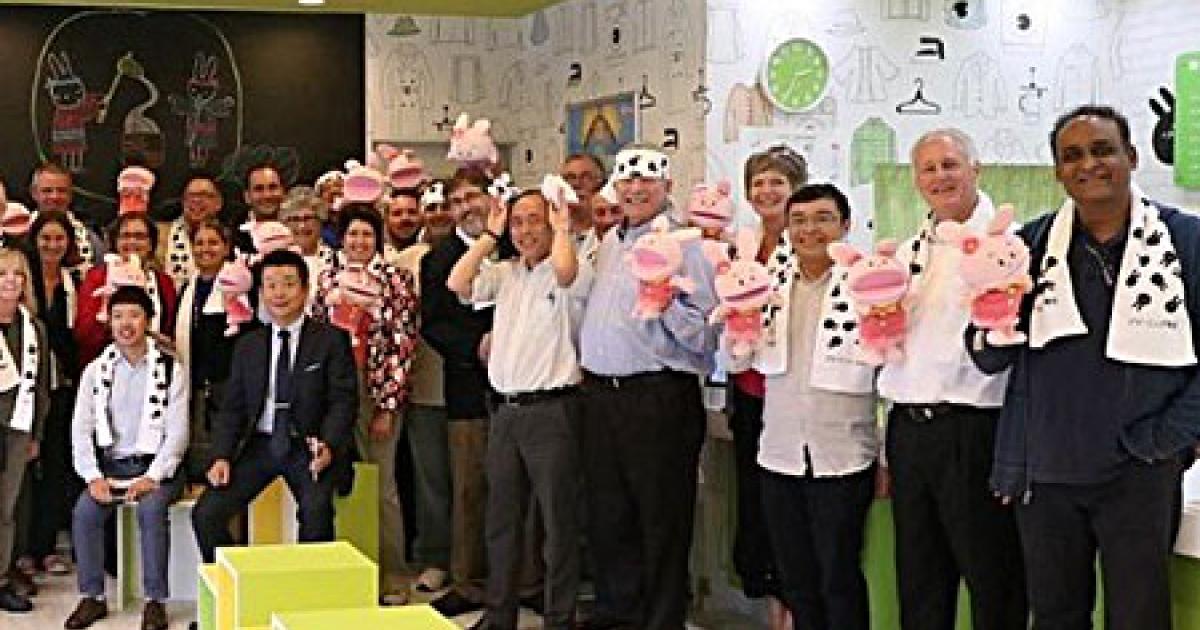 Toshiyuki Izumi, president of IDC 2015 and of Izumiya Cleaning Ltd., presided over the event from initial welcome to the closing Sayonara Party.

In Japan, there is one cleaning shop for every 800 people; in contrast, there is one shop for 16,250 people in the United States (approximately). Yoshio Nishikawa, president of NIC Corp., offered insight into why the Japanese drycleaning industry has been able to achieve such impressive market penetration and success.

He attributed the initial achievement to high economic growth that resulted in white-collar job expansion, combined with a program of industry craftsmanship and apprenticeship from the 1950s through the 1970s. Later growth resulted from learning from external global best practices and then customizing and improving upon them.

Nishikawa closed by reviewing the challenges the industry faces in Japan as its population continues to shrink and the country becomes more dedicated to preserving limited natural resources.

Shuhei Numazaki of U-GO Corp. spoke on Ensuring Future Growth in the Business. His company has increased sales by 3000% since 2000 by operating 140 shops under the Cleaning Senko brand that targets families with the logo of “The Most Fun Cleaners in Japan,” and 20 MIXMAX operating locations targeting millennial professionals as the “Coolest Cleaner in Japan.”

The brands have profiled consumers for maximum cleaning usage and honed their messages to a fine point for those targeted customers and prospects. Cleaning Senko stores are decorated for maximum family entertainment so the entire family enjoys the experience.

For example, the mascot is a black rabbit named after a popular movie star, and promotional efforts are built around an ongoing story about the rabbit and his family. A major event was the rabbit’s wedding—a real event attended by the entire staff and guests. In-store décor and games are designed to engage and challenge all ages. Entire walls are painted black to create fun messages to engage and interact with visitors to the stores.

The associates are called “cast members” to help engender the sense of interaction to delight the customers. This culture is reinforced by a companywide retreat (families come, too) to a Disney resort.

MIXMAX uses clever promotions with TV ads, videos, social media and customer newsletters. The “race to the store” ad, which rewards every seventh customer, and the “Tuesday” ad are especially entertaining and effective.

U-GO is strategic in its management recruitment, attracting university graduates that aspire to corporate career paths. It has designed its recruitment, training, promotions, unique headquarters, and company vision all with dedicated quality management in mind.

To keep its team of 850 people informed and trained in a consistent manner, U-GO uses CYBOS, a cloud-based interactive trackable communication system that is now being upgraded to an even more advanced alternative.

U-GO believes its goal of “growth as human beings” for team, families and customers will sustain the company’s prosperity for the next century.

Homedry Cleaners in Kobe, a family-owned operation of 71 dry-store outlets including 10 franchises, welcomed attendees to its facility. It is a mid- to high-range cleaner with quality evidenced by the pride exhibited by staff in the plant. During the “clothes changing season,” customers line up outside the store for as long as an hour waiting to be served, or they will take a number and run other errands until it is their turn.

Another factory visit was to Hakuyosha Osaka, part of the largest drycleaning and laundry operation in Japan. Its services cover quality cleaning of clothing as well as shoes and bags, household, garment storage, courier services (anywhere in the country), and corporate and hotel cleaning services. It has an in-house plant at the IDC convention hotel, which I found to produce excellent quality with a three-hour turnaround time. The main plant uses a machine to press and fold kimonos at the rate of 1 per 3.5 seconds! The company employs 1,500 people.

On IDC’s second day, Ray Lambert of Lambert Associates and former CEO of Jeeves of Belgravia, began the program with Learning from Successful World Champions. He focused on Jeeves’ worldwide operations and highlighting the Jakarta franchise with its spotless plant featuring a white marble floor, and the cutting-edge fashionable stores that attract wealthy global patrons. The business has grown with prices that are exponentially higher than the average through exceptional quality and service for the discerning fashion- and ego-driven customer with means.

Next to present was the management team from Chicago’s CD One Price Cleaners: CEO Rafiq Karimi, VP Marketing John Morocco and VP Store Operations Steven J. Skonecke. The company founded in 2001 is now 33 stores strong, and it plans to aggressively expand into multiple markets in the next three years.

The men attribute the unique combination of superior quality combined with free same-day service at a single price for revolutionizing the customer experience in the United States. Volume drives CD One Price’s model of providing superior customer service through efficient standardized processes. Its stores do four times the dollar volume and 10 times the item volume of the average cleaner in the U.S., the representatives say. They serve their customers complimentary Starbucks coffee and rely heavily on the results of a customer feedback tool (Listen360) to continually improve the customer experience.

Thursday’s conclusion: Reports from around the world, and some parting thoughts