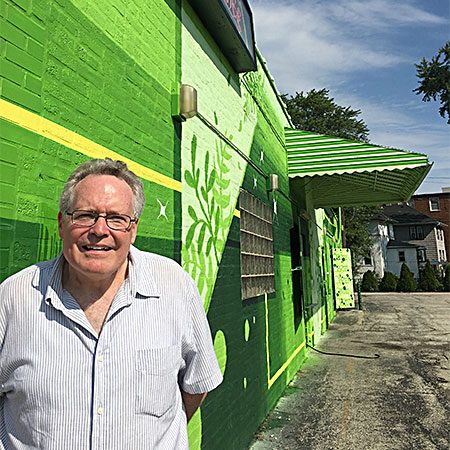 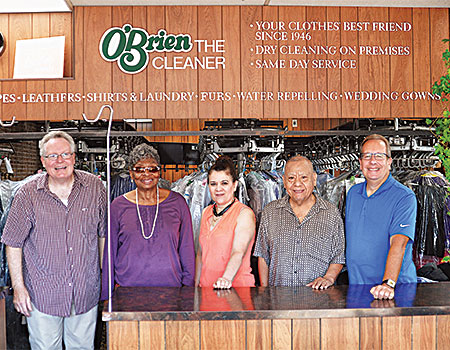 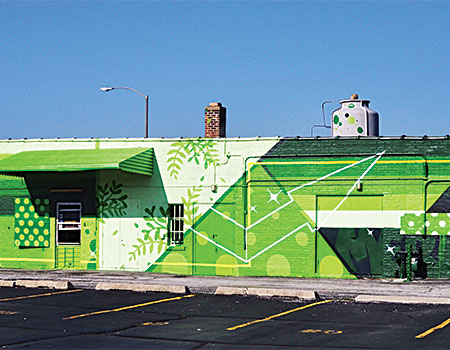 Mural is a highly visible way to show local involvement

Yes. You are. Lots of it. And beautiful. But it’s not money green. It’s the multi-green hues and shapes of a stylish, modern new mural.

Beyond the green of profits, one drycleaning operation found out that growing green also comes in the form of local community involvement.

Meet Tom O’Brien, the owner of O’Brien The Cleaner, a drycleaning business located in the near-west Chicago suburb of Berwyn, Ill., population 55,000.

“Since January 2018, I have been working alongside the Berwyn Public Art Initiative (BPAI),” O’Brien says.

“They have just completed a mural on my drive-up window side of the building. I have felt passionately about this mural to add to the beauty of Berwyn.”

According to its website, the BPAI writes: “The Depot District functions in many ways as the center of community life in Berwyn. Adding vibrancy with public art is vital.”

The BPAI already had another artist install a mural in May a few blocks away on the other side of the commuter train tracks. O’Brien The Cleaner was next for a mural to be completed in summer. It was completed on July 23.

“When BPAI representatives came to me in the winter and explained it was for the community, I was all-in,” the owner of the drycleaning business says.

He adds with a grin: “We were going to turn a sow’s ear into a silk purse.”

The artist picked for the job was a Seattle native, currently based in Chicago, who goes by the name Miss Merlot, a young woman in her 20s. This author asked her to be invited back to pose with O’Brien for a photo for American Drycleaner and she accepted. She wore her spray paint safety mask, however, to protect her identity.

On a bright fall day, they stood in front of the sea of greens of the wondrous graffiti artwork adorning O’Brien’s east wall of his drycleaning plant. It’s a long building. The green is soothing, calming.

“It took her three days to install,” O’Brien notes. “Miss Merlot showed me designs and ideas on (her) computer at first, and we worked with her. She was wonderful.”

BPAI board member Rob Kowalski and his wife Melissa, also a member, came by for the photos as well and were beaming about the mural. “Commuters see it, residents come by, it’s great,” Rob Kowalski relates.

Murals on local buildings is yet another highly visible way to show support in the community. And there are still other ways to grow a cleaning business, too. O’Brien has grown up in his family business, and that’s a key part of it, too. Growing, or greening, a family business; making it thrive.

“Starting in 1974, I began working full time alongside my father, Joseph, my mother, Mary, and my brother, Michael,” he explains.

“I started out as a pants presser and skilled my way up to 60 pants an hour. I also pulled clothes out of the drycleaning machine and hung them up. Towards the end of the night, I worked the counter until closing.

“Nowadays,” he says, “I am still working full time. I do everything in the plant but sew. My brother, Kevin, helps out on the weekends. I also have two finishers and a tailor.”

Today, O’Brien insists, he finds that “growing my business works the best through my excellent rating on Yelp. I believe everyone, young or old, looking to try a new cleaner heads straight to the Internet for their research.

“These excellent Yelp ratings stem from the relationships built though my previously stated customer service tactics,” he points out.

“I am also a UPS Access Point. This is great because I am on the UPS website. It also gets people into the door and ensures they know I am here. People who never knew I was here have now discovered me,” O’Brien adds.

There’s no doubt that with the bright green mural helping to enliven the look of the town, it has brought a nice amount of attention to this business celebrating its place in the community.

A recent mural dedication ceremony for the O’Brien The Cleaner graffiti art brought out local residents and officials alike.

On the early autumn day this editor visited to take photos and stood just inside the front door of O’Brien The Cleaner, a customer walked in with the typical clothing draped over his arm to be dropped off and cleaned. Owner O’Brien said with a grin: “Good morning, Mr. Smith.”

That really says it all. Greening in the community, greening in business, greening to grow.