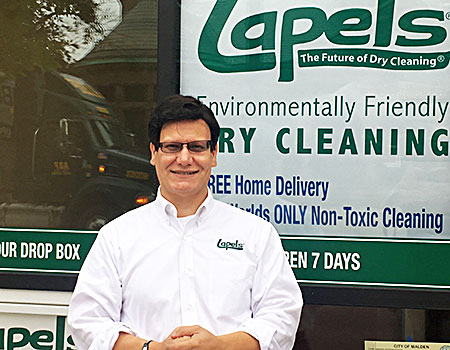 MALDEN, Mass. — Lapels Dry Cleaning, which considers itself an “innovative, environmentally friendly” drycleaning company, hosted a Nov. 12 grand opening for one of its newest stores, located here at 480 Main St., the franchise reports.

“We had a great turnout, and we look forward to serving the people who live and work in the area going forward,” says Moe Hajj, owner of the new Lapels store. “We’re extremely excited to bring a sustainable, non-toxic way of dry-cleaning clothes to Malden.”

Lapels Dry Cleaning says that it also sets itself apart through customer service. Lapels customers, it notes, are greeted to a warm and inviting reception area, with friendly customer service representatives, and alteration services.

The franchise has also recently opened new stores at 95 Washington St. in Canton, Mass., and 54 Colony Avenue in South Boston.

Tom Wong is one of the co-owners of the Canton store. “Lapels of Canton is a satellite store to Lapels Dry Cleaning of Stoughton, Mass.,” he explains.

“The addition of our South Boston plant, coupled with our store at Boston Seaport, will enable us to better serve the residents and businesses in the area,” says Scott Goddess. “For hotels and condos, having a plant nearby gives us the capability to offer a building valet service.”