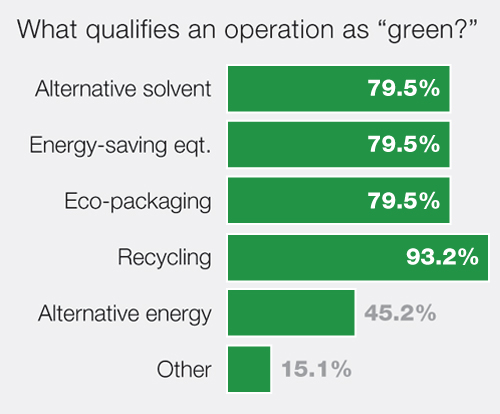 CHICAGO — Interest in “environmentally friendly” products and services is leading many drycleaners to embrace terms such as “green” and “organic” in marketing their businesses. What makes an operation “green,” however, varies, according to American Drycleaner’s most recent Wire survey.
Asked “What qualifies an operation as ‘green?’” drycleaners named “Recycling hangers, poly and other wastes” as the most important strategy, with 93.2% of respondents choosing it. About four out of five (79.5%) drycleaners named “Using a solvent other than perc,” “Using equipment that conserves energy” and “Offering reusable/biodegradable packaging,” as important “green” qualifications.
Asked which of these strategies they pursue in their plants, drycleaners again listed “Recycling hangers, poly and other wastes” as most important, with 88.7% saying they do so. Three-quarters (74.6%) report using a solvent other than perc, with an additional 8.3% naming wetcleaning, CO2 and GreenEarth processes specifically. Some 69.0% are “Using equipment that conserves energy,” and 47.9% are “Offering reusable/biodegradable packaging.” A small number (11.3%) also use alternative fuels and energy sources in their delivery vehicles and plants.
Asked whether or not they advertise their businesses as “green,” “organic,” “environmentally friendly” or something similar, more than two-thirds (68.1%) of survey respondents said “Yes,” and 31.9% answered “No.”
Drycleaners who market themselves as “green” back up their claims with a variety of reasons, including state and industry environmental certifications, aggressive recycling programs, and their choice of processes. Others say they call themselves “green” to create differentiation in consumers’ minds. “It’s the catchphrase of the decade,” one says.
Among operators who don’t market their businesses as “green,” several operators felt that their processes and strategies are not yet sufficient to qualify for “green” status — even though similar operations felt their efforts were sufficient. A few said that their use of a certain solvent — whether petroleum, high-flashpoint hydrocarbon or perc — precludes them from making any “green” claims.
“Clients should be made aware of the steps your company is taking to become more ‘green,’” says one respondent. “At the same time, the terms should not be used to mislead.”
Subscribers to American Drycleaner’s Wire e-mails — distributed weekly — are invited to participate in an industry survey each month. The survey is conducted online via a partner website. Each survey is developed so it can be completed in 10 minutes or less. Readers are encouraged to participate, as a greater number of responses will help to better define operator opinions and industry trends.
Click here and follow the menu instructions to sign up for the free e-mail service.