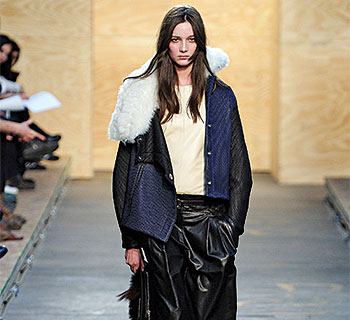 CHICAGO — The fall 2012 couture and ready-to-wear shows in Milan, New York and Paris offered up a variety of elegant, self-assured looks that were, for once, neither shockingly over-the-top nor snoozingly sedate. If anything, designers refined and reiterated the trends of the prior year, putting a pause on the march of style as if to say that these are the new staples, and all hell can break loose next season.

That’s not to say that the new fall styles are easy-care—they aren’t. Designers opted for some of the most difficult constructions and embellishments for this year’s collections, ensuring that what was once the reserve of the fashion revolutionary will soon be the purview of the mall and the middle class.

Fluorescent furs, mannish, matchy pantsuits, and origami-style outerwear are just a few of the trends that are moving quickly from catwalk to street, meaning that dry cleaners will soon face the specific challenges they pose—if they aren’t facing them already.

What follows is a primer on the fall fashions operators nationwide will see in the days and months ahead, and how to handle them without a faux pas.

Asymmetrical capes, “statement” coats and full-cut, “drop-crotch” pants appeared on runways by the sackful, as if to say that tights and skinny jeans have finally had their day. Fashion will never abandon the form-fitting, of course, but women are embracing the fuller silhouette and Hepburnesque drape of this year’s styles as a more mature option, and putting more material on their padded shoulders.

“A lot of the capes and coats have incredible construction, but they are made with soft fabrics,” says Chris Allsbrooks, director of training operations for ZIPS Dry Cleaners. “Be careful in finishing; don’t press them hard.”

If fabric is cut on a bias to create volume, adds Alan Spielvogel, garment analyst with the National Cleaners Association (NCA), use short cycles and low heat to protect against distortion, since fibers often tend to migrate back to the original weave.

And big retro ’80s shoulder pads can distort, shift or even dissolve in the cycle; operators should pin them in place or, better still, remove them before cleaning.

“The safest approach is to remove and resew the pads—and I don’t mean at the cleaner’s expense,” Joe Hallak Jr., vice president of Hallak Cleaners, says. “Any time you need to take something off the garment to preserve its integrity, you should explain [it] to the customer. They will not only be thrilled that you have the knowledge to recognize this, but will almost always be glad to pay you for it.”

From Bruce Beggs, Editorial Director: The following letter was received following publication of this story in the Nov/Dec print edition of American Drycleaner: Dear Mr. Beggs: We noted with interest your cover headline and story in the Nov/Dec issue titled “Fashion vs. Fabricare” and subtitled “Four Fall Styles That Could Be Problematic for Your Plant.” On behalf of our Affiliates, many of whom I have heard from regarding this story, we at GreenEarth respectfully disagree. We believe headlines like these create unproductive controversy and wholeheartedly suggest it is time for our industry to embrace a more consumer-centric, forward-looking view. When we look in a mirror, we can only see two things: ourselves, and what is behind us. The vast majority of “problem” fashions can be safely cleaned and with great results using a gentle cleaning system like GreenEarth or a higher flashpoint hydrocarbon. Our industry has relied far longer than necessary on aggressive solvents that behave badly with many fibers, dyes, ornamentation and components. And we haven’t trained staff how to utilize appropriate programming to optimize thermal and mechanical action variables or finishing technique advancements given the equipment available today. Suggesting that it “isn’t the fault of the cleaner” and blaming the manufacturer puts self-interest ahead of what’s best for the customer and the garment, and invites the fashion industry to view us as their adversary. What is there to be gained from advancing this point of view? GreenEarth believes it is in everyone’s best interest, including the customer, the manufacturer, the garment retailer and the dry cleaner, for the dry cleaning industry to recognize the opportunity to be a partner rather than an adversary. It’s time customers had a real choice when shopping and caring for their garments. It is for this reason we have suggested to the FTC [Federal Trade Commission] that garment care instructions be widened to give manufacturers the option to include gentle dry cleaning alternatives with non-aggressive properties that make problem items no problem at all. Expanding the range of fashions that can be professionally cared for may reverse the contraction in revenues to which the dry cleaning industry has been an inadvertent accessory. The notion that to be effective, cleaning solvents need to be harsh, on clothes or the environment, is yesterday’s paradigm. Let’s work together with the fashion industry and the FTC to put customers first. Best Regards, Tim Maxwell, President GreenEarth Cleaning Kansas City, Mo.