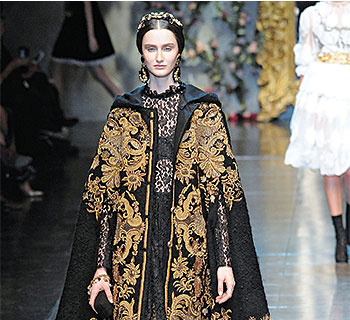 CHICAGO — The fall 2012 couture and ready-to-wear shows in Milan, New York and Paris offered up a variety of elegant, self-assured looks that were, for once, neither shockingly over-the-top nor snoozingly sedate. If anything, designers refined and reiterated the trends of the prior year, putting a pause on the march of style as if to say that these are the new staples, and all hell can break loose next season.

That’s not to say that the new fall styles are easy-care—they aren’t. Designers opted for some of the most difficult constructions and embellishments for this year’s collections, ensuring that what was once the reserve of the fashion revolutionary will soon be the purview of the mall and the middle class.

Fluorescent furs, mannish, matchy pantsuits, and origami-style outerwear are just a few of the trends that are moving quickly from catwalk to street, meaning that dry cleaners will soon face the specific challenges they pose—if they aren’t facing them already.

What follows is a primer on the fall fashions operators nationwide will see in the days and months ahead, and how to handle them without a faux pas.

Topping the trends for the second year in a row, Baroque takes historically prim, Renaissance-inspired silhouettes and turns them sultry with lots of black lace and sheers, gold brocade and embroidery, and accents in the form of paillettes, metal sequins, and plastic and glass prisms and jewels for a sexy, feminine, fun-but-formal look.

But the mix of structure, sheers and spangles is a recipe for disaster in dry cleaning; short cycles and net bags are necessities.

“Whenever dealing with lace and sheers, the process has to be gentle,” Joe Hallak Jr., vice president of Hallak Cleaners, says. “It doesn’t take much to snag or tear a sheer or ‘illusion’ fabric.”

And the decorations don’t help; metallic threads can shift and “rip the accompanying sheers like a cheese cutter,” adds Alan Spielvogel, garment analyst with the National Cleaners Association (NCA).

Paillettes, sequins and other baubles can melt in the cycle, or fall off if they’re attached with a glue that dissolves. “With glass, you need to be careful that it doesn’t shatter in your machine,” advises Chris Allsbrooks, director of training operations for ZIPS Dry Cleaners, “and make sure you don’t strip a reflective backing, or you’ll have a cloudy piece of plastic.”

When in doubt, test the garment and its many components. “At times, care labels are sewed into garments before the trims become a part of it,” Hallak says. “This is where care labels sometimes mean less, and testing and protection is more important.”