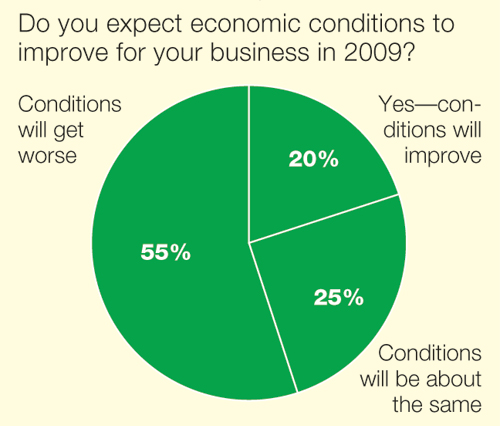 CHICAGO — Battered by a flagging economy and declining sales, more than half (55%) of drycleaners responding to American Drycleaner’s most recent Wire survey say that they expect the economy to get worse before it gets better. One-quarter of respondents expect economic conditions to stay about the same in 2009, while 20% expect the economy to improve.
Asked whether the economy will have an effect on plant staffing and capital expenditures in 2009, almost two-thirds answered that they “plan to cut staffing and capital expenditures and/or reduce purchasing” this year. About one-quarter (24%) say they will hold staffing and capital expenditures at about the same levels in 2009, and just 11% are preparing to increase staff levels and/or expenditures.
Asked to elaborate on local market conditions and their effects, drycleaners say that sales and piececount declines in business are continuing in blue-collar and upscale communities alike. Some operators report a steady decline in business, as customers cut costs by dropping off smaller orders or waiting longer to pick them up. Others are facing more catastrophic conditions; one reported filing bankruptcy.
Many operators are slashing hours and cutting costs to make their operations as streamlined as possible to survive. “This is the scariest business environment I have seen in my 20-plus years in the industry,” one operator says. “We feel it’s prudent to take a defensive posture, look for opportunities and prepare for the inevitable fallout.”
“I don’t think ’09 will be as good as ’08,” another operator who cut costs early in the downturn says. “But I do think that the next six months will be better than the last six.”
Subscribers to American Drycleaner’s Wire e-mails — distributed weekly — are invited to participate in an industry survey each month. The survey is conducted online via a partner website. Each survey is developed so it can be completed in 10 minutes or less. Readers are encouraged to participate, as a greater number of responses will help to better define operator opinions and industry trends.
Click here and follow the menu instructions to sign up for the free e-mail service.